PC gamers of a certain generation will remember the name MechWarrior. Decades ago, this was the game franchise that put giant robots on the map. If you’ve played anything that has huge walking mechanized death machines (such as Titanfall or Into the Breach) then it can trace its lineage directly back to MechWarrior.

Then, MechWarrior just sort of disappeared. It used to be that you couldn’t go a few years without a new MechWarrior game hitting stores, but after MechWarrior 4: Mercenaries, Microsoft shelved the whole franchise. There were many reasons for this that we won’t get into here, but ultimately it came down to numbers: there just weren’t enough MechWarrior fans to justify the cost of developing a new AAA title. An ignominious end to a noble series.

That’s the way things would have stayed if not for two companies. The first was Harebrained Schemes, a Seattle-based developer that picked up many old licenses and made delightful indie games out of them like Shadowrun: Hong Kong and BATTLETECH. The second was a Vancouver-based developer called Piranha Games Inc. 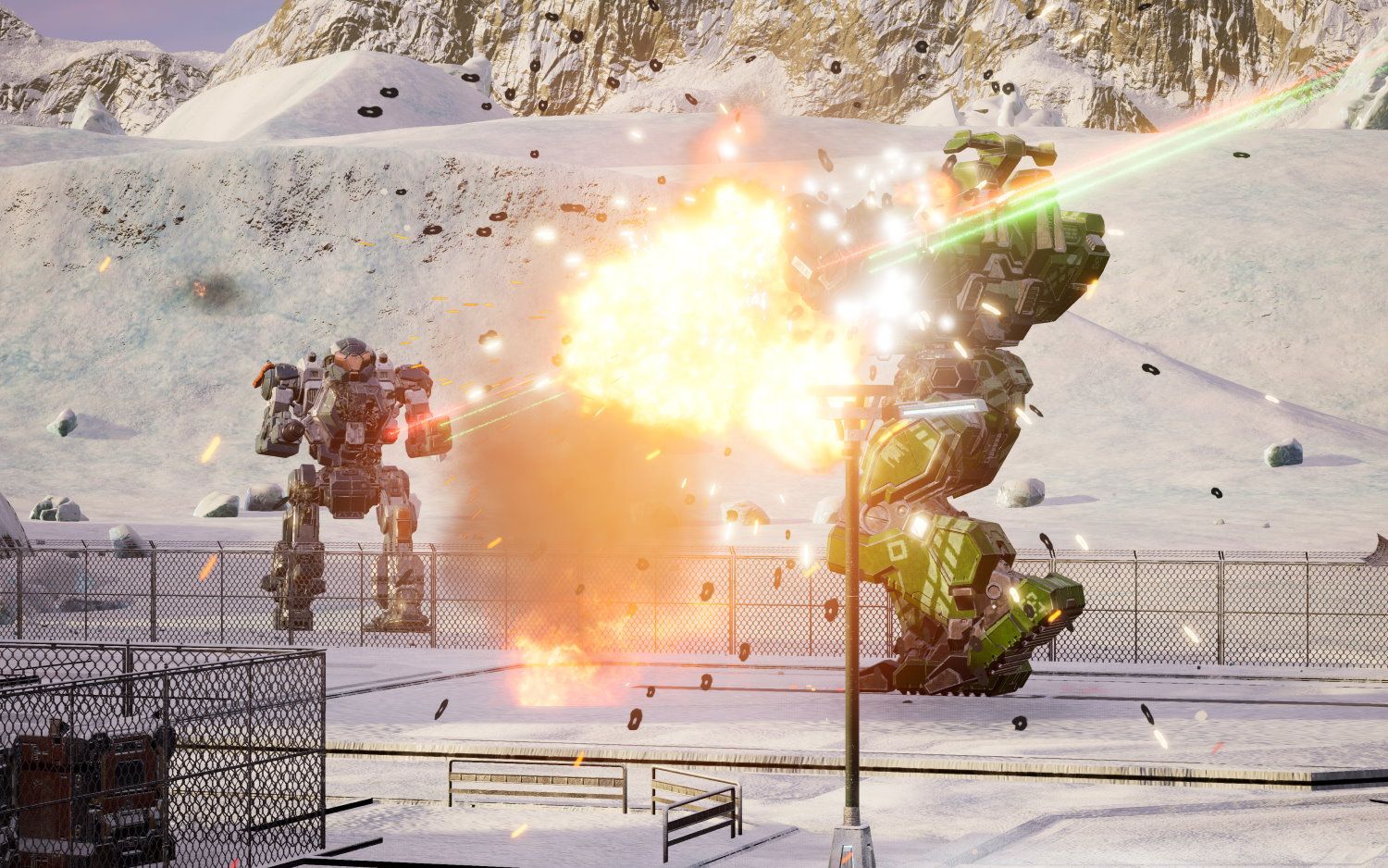 Back in 2012, PGI started work on a free-to-play multiplayer version of MechWarrior called MechWarrior Online. Although they’ve achieved some success with that game over the years, there was always a sense among MechWarrior fans that at least half the audience just wasn’t being served. Those that grew up with MechWarrior games did so as a single-player experience, as the internet hadn’t fully caught on yet. As we’ve found out with games like God of War and Star Wars Jedi: Fallen Order, there are still plenty of gamers out there willing to pay for a quality single-player experience.

Enter MechWarrior 5: Mercenaries, the first single-player (mostly) MechWarrior game in over 15 years. That’s a long time to wait for MechWarrior fans, and although those fans will probably consider MechWarrior 5 to easily be the best in the series, it still doesn’t quite seem to have caught up to 2019.

Welcome To The Inner Sphere, MechWarrior 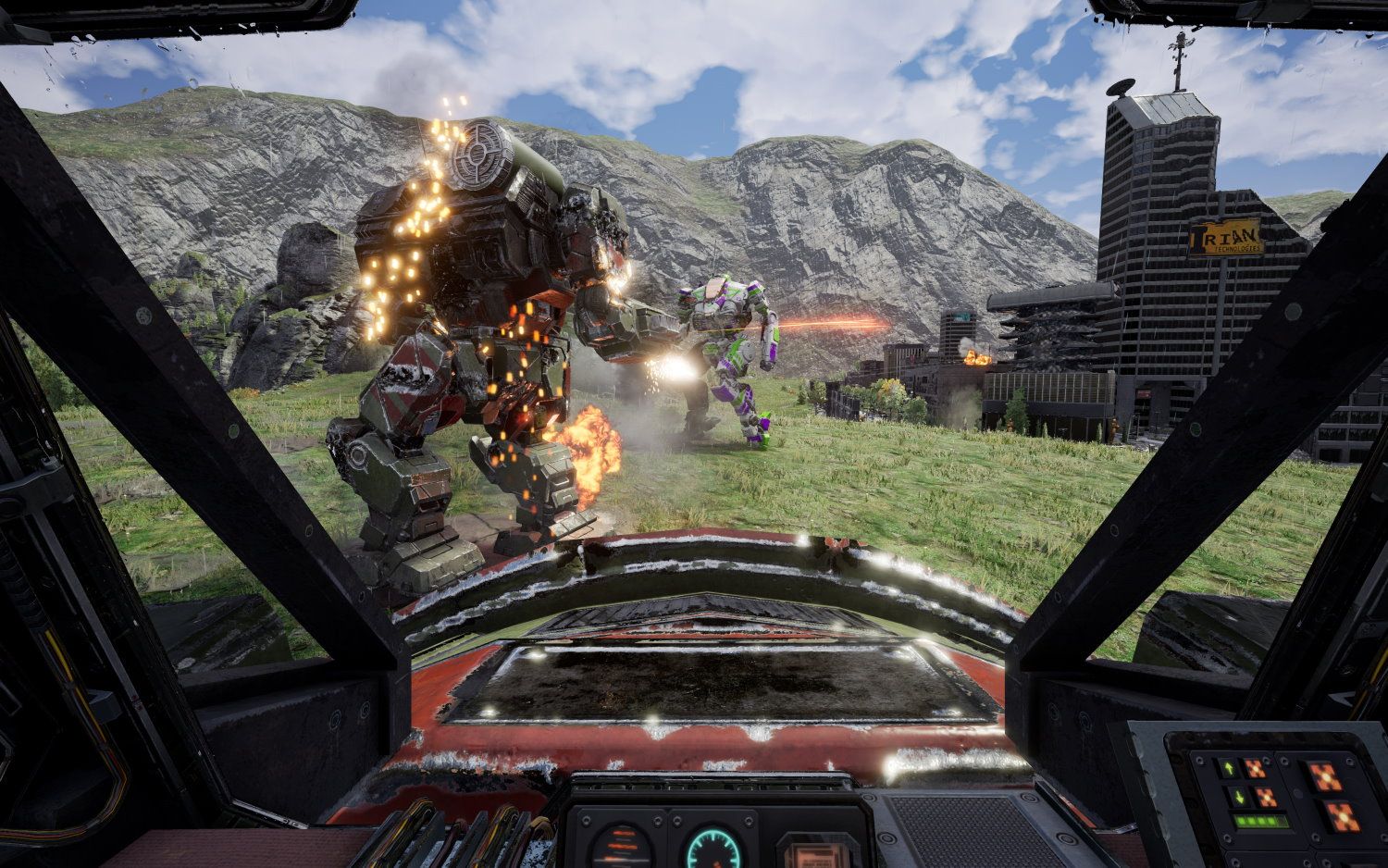 In MechWarrior 5, the year is 3015. Humanity has long since conquered the stars and after centuries of near-constant warfare, the political system of the Inner Sphere has devolved into feudalism with Five Great Houses calling the shots. While each Great House has its own standing armies (and lots of them), they’d still rather pay mercenaries to do the fighting for them.

That’s where you come in. As the son of Nikolai Mason, you take over his mercenary company after your father is killed defending you from a mysterious gang of rival MechWarriors. It’s up to you to take command, get your company back on its feet, and figure out who those jerks that killed your dad were. All the while, you’ll be making cash and acquiring new ‘Mechs, pilots, and supplies by fighting battles for the Five Great Houses.

The formula for MechWarrior 5: Mercenaries has been the same for years: take contracts, blow stuff up, get paid, then move onto the next planet to do it all again. That’s no different here, and luckily, PGI has learned a thing or two from MechWarrior Online about how to make a giant robot feel huge, imposing, and above all, powerful.

For the first time, walking your giant BattleMech through a forest of trees causes those trees to topple to the ground. Firing your laser at foliage will start a forest fire. Shooting at buildings will not only cause a crater, but also part of the wall will collapse. And it’s not just shooting things either; you can walk right through concrete buildings and have them collapse around you if you’re not careful.

Or maybe you just don’t care that there’s a building in your way. That’s the beauty of driving a 50-ton ‘Mech and MechWarrior 5 captures that feeling perfectly.

A Throwback To A Bygone Era 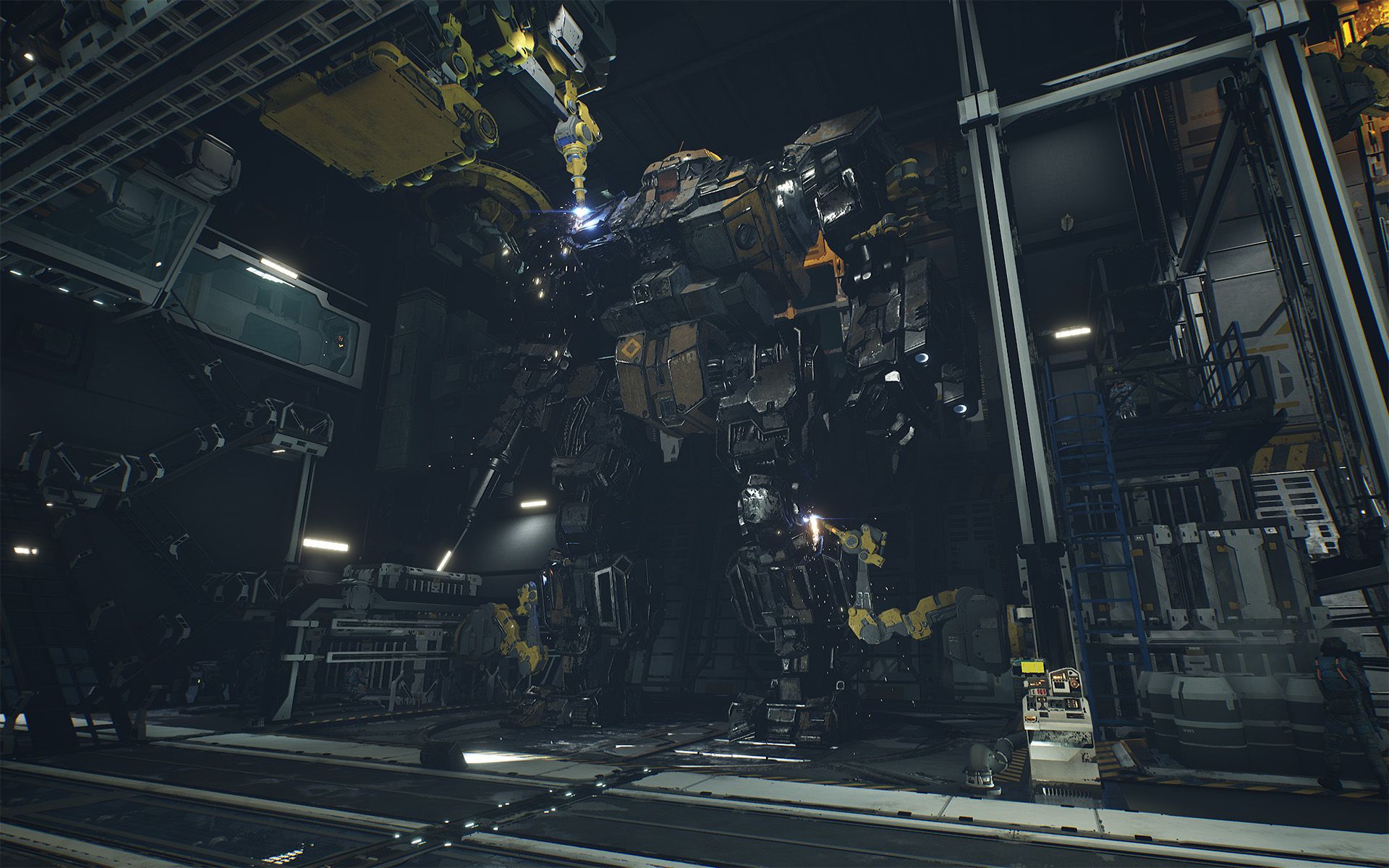 It doesn’t quite stick the landing everywhere else, though. Both enemy and friendly AI feel mostly brain dead and just seem to wander around without much strategy for cover or fields of fire. On one mission where I was tasked with defending a friendly garrison, my allied squadmate just walked through the very buildings we were supposed to protect, costing me my bonus.

This behavior is very similar to MechWarrior 4 from almost 20 years ago, with the only difference being that now buildings will implode rather than cause ‘Mechs to bounce off harmlessly.

Another odd quirk of MechWarrior 5 is the first-person ‘Mech Bay sequences. For the first time, you can actually stand beside your enormous death machine and peer upwards to bask in its menacing beauty. That’s great and I absolutely love it, but this is also the section where you interact with various technicians and employees under your command, and they all just seem to stand there like mute mannequins until you go up and talk to them. They don’t move to make repairs or fiddle with the spaceship’s controls or anything—they just stand there and stare into space.

The whole thing seemed like an anachronism from a bygone era, where NPCs weren’t designed to look like real people and just made to look like person-shaped quest givers.

They don’t give you contracts, though. For that, you need to head to the ship’s command center and go through MechWarrior 5’s menus. The game does a decent job of laying things out simply and intuitively, and you get a nice tutorial to make sense of it all too. In fact, MechWarrior 5 places a great deal of emphasis on making sure newcomers to the series feel welcome. A lengthy tutorial sequence at the beginning ensures you know what buttons fire and how to move your ‘Mech so that when combat begins you have all the tools you need to get into the action.

Will It Make A MechWarrior Out Of You? 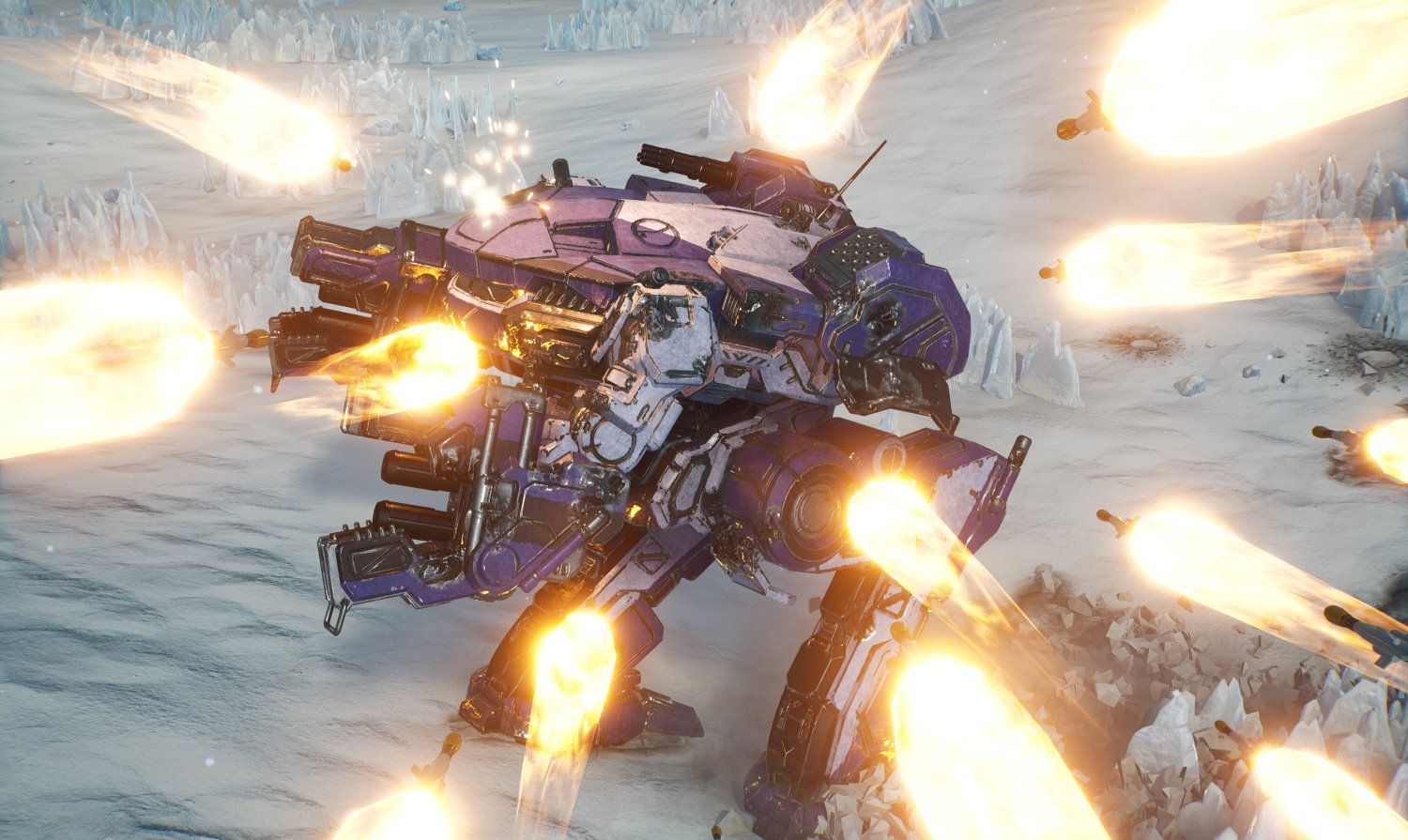 Despite its quirks, longtime fans of MechWarrior will find a lot to love in MechWarrior 5, but those tutorials make it clear that PGI wants more than just old fans to return to the fold—it wants new fans to experience the singular joy of piloting a multi-ton death machine, of using lasers, cannons, and missiles to level a city block and to render your enemies unto dust.

With so much of the game feeling like a throwback, though, it’s hard to say if they’ll be successful.

A PC review code was provided to TheGamer for this review. MechWarrior 5: Mercenaries is available now for PC on the Epic Games Store