It’s been quite a while since we’ve seen a proper release in the Call of Juarez franchise. Debuting with the eponymously-titled spaghetti western homage in 2005, the series has thus far spawned four titles, all varying wildly in quality, culminating in the 2013 release of CoJ: Gunslinger.

A generally well-regarded arcade FPS, Gunslinger served as an excellent swan song for the well-regarded seventh-generation series, and fans can take heart in the fact that 2019 saw the release of a port on the Nintendo Switch. However, while Gunslinger is still plenty of fun on the hybrid console, obtuse controls and oversaturated visuals leave it a bit shy of the mark.

Once Upon A Time In The West

First and foremost, Call of Juarez: Gunslinger’s narrative is one of the silliest, most enjoyable experiences ever presented in a budget FPS title. The story is told from the perspective of Silas Greaves, a grizzled old outlaw reminiscing over his glory days to a small group of bar patrons. His tales are full of outrageous action and incredible heroism, but they aren’t entirely accurate. In fact, the story often changes on the fly as Greaves changes his mind and alters things as he sees fit. It’s an awesome mechanic which always leaves the player guessing what may happen next, or what was or was not historically accurate—not that anyone should be heading into a Saturday morning cartoon-inspired experience hoping for historical accuracy. 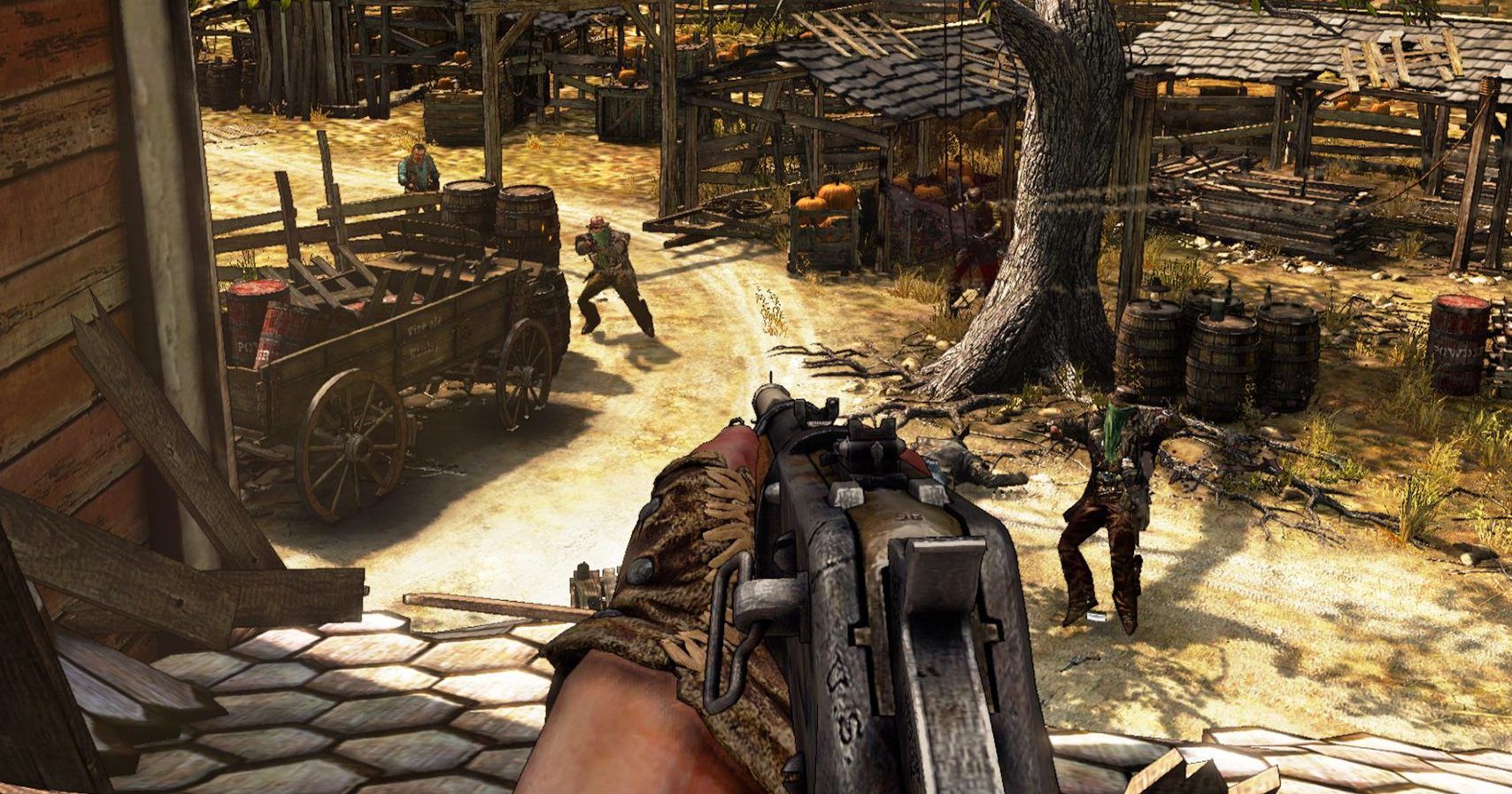 Throughout the journey through Silas’ ever-changing memories, players can collect small tokens, referred to in-game as “nuggets of truth,” which can help dedicated sleuths separate fact from fiction. They’re usually fairly conspicuously placed, and an early-game upgrade makes them even easier to locate, but it’s a neat inclusion that adds a bit of cohesion to the otherwise wildly schizophrenic plot.

The Good, The Bad, And The Ugly

The gameplay, on the other hand, can be a bit of a struggle—at least on the Switch. Longtime fans of the console will concede that it doesn’t necessarily handle first-person shooters all that well, and the undersized controllers make precise aiming and twitch reactions a bit unfeasible. While this was never an issue on PC or dedicated home consoles, the imprecise nature of the Switch Joy-Cons makes the gunplay feel a bit sloppy and unrefined. 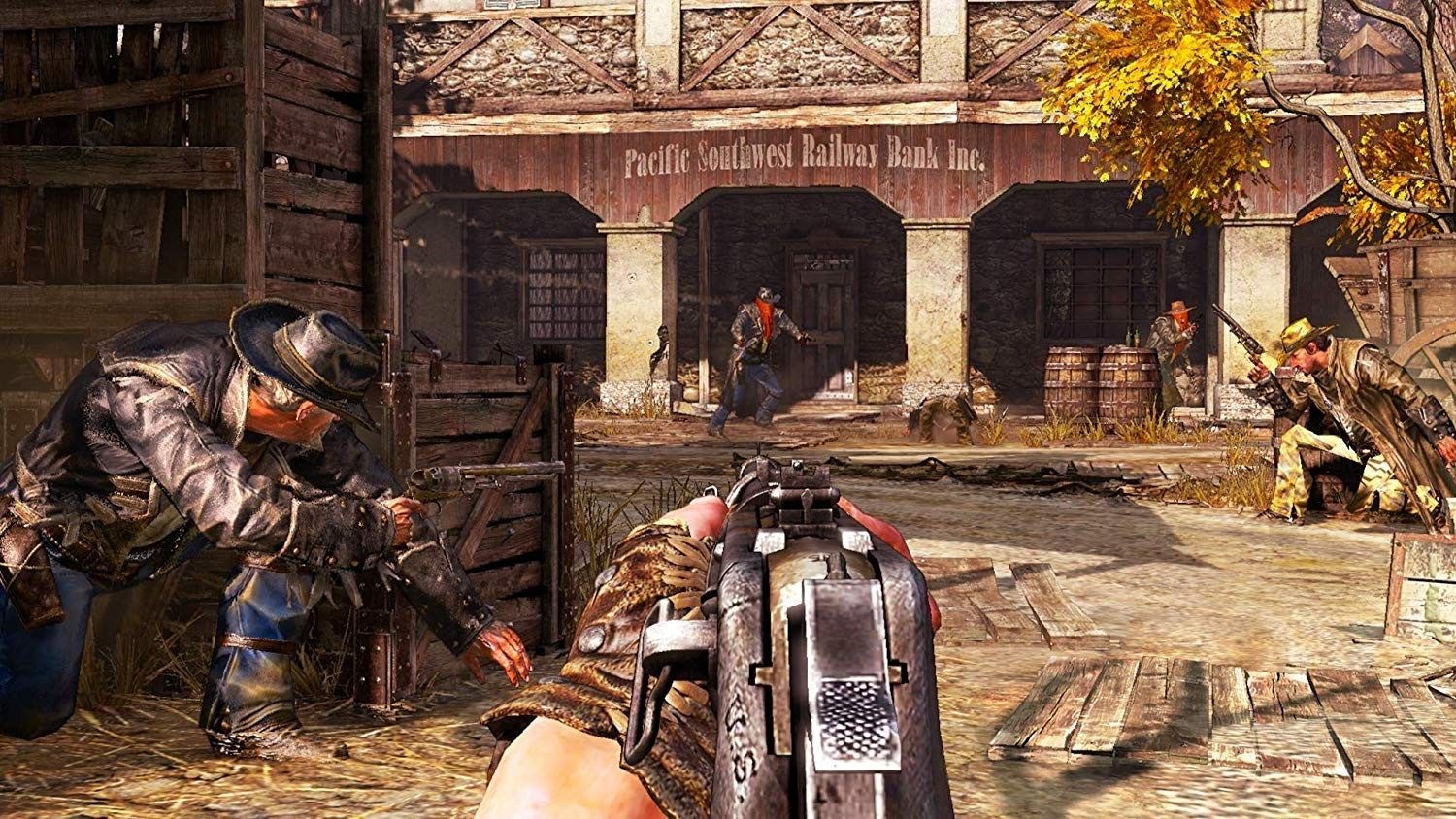 Though it features standardized FPS controls and some incredibly generous auto-aim, making your mark can often be tough, particularly with tilt controls enabled. Though some may enjoy the added maneuverability offered by the Switch’s gyro controls, it often seems to impair more than aid, as a slight twist of the controller could send the aiming reticle slightly to the right or left of a target. Fortunately, this can be turned off, but the player is essentially left to the mercy of the game’s snap-aiming system, which occasionally prioritizes things like explosive barrels or far-off enemies over primary threats. The best remedy is to drop the game difficulty down to its lowest setting and accept it as a concession of the console, but there’s no denying that this is a less than ideal setup.

The second-to-second gameplay remains a total blast, pun fully intended. Call of Juarez feels a bit like an on-rails arcade shooter ala something like House of the Dead, except players have full control of the character, and there’s no lightgun support. It’s arcadey shooting action at its absolute best, and it feels reminiscent of playing the old Mad Dog McCree FMV arcade games… if anyone remembers those.

Adding to the fun is a rudimentary skill tree that allows players to acquire new skills, dual-wield guns, and enhance certain abilities. Although there is a leveling system, this doesn’t come anywhere close to an RPG. It does add a nice element of personalization that could go a long way for those who care to flesh out Greaves’ combat abilities. There’s also a bullet-time mechanic ripped straight from The Matrix. Using it causes time to slow to a near-stop and enemies to grow bright red, quickly turning a losing battle into a headshot-bonanza that would make Clint Eastwood blush.

Is This Western A Winner?

All in all, Call of Juarez: Gunslinger’s Switch port is far from ideal, and those still looking for an optimal experience will want to check out the version available on Steam. Yet, for those who aren’t all that concerned with pixel-perfect accuracy and simply want to take their slapstick six-shooter fun on the go, it’s more than worth the asking price of twenty dollars.