Third-person action games aren’t normally multiplayer affairs. There have been some outliers like Anarchy Reigns or that weird mode in God Of War: Ascension. Aside from that, most of the time you’re just fighting alone against waves and waves of enemies with your various swords, axes, and other magical pointy objects.

Ninja Theory is no stranger to the character action genre as it’s the studio behind the controversial DmC: Devil May Cry and the critically acclaimed Hellblade: Senua’s Sacrifice. Bleeding Edge is a bold attempt at something new from the Microsoft-owned developer, but much like their catalog of games, it’s a bit of a mixed bag. 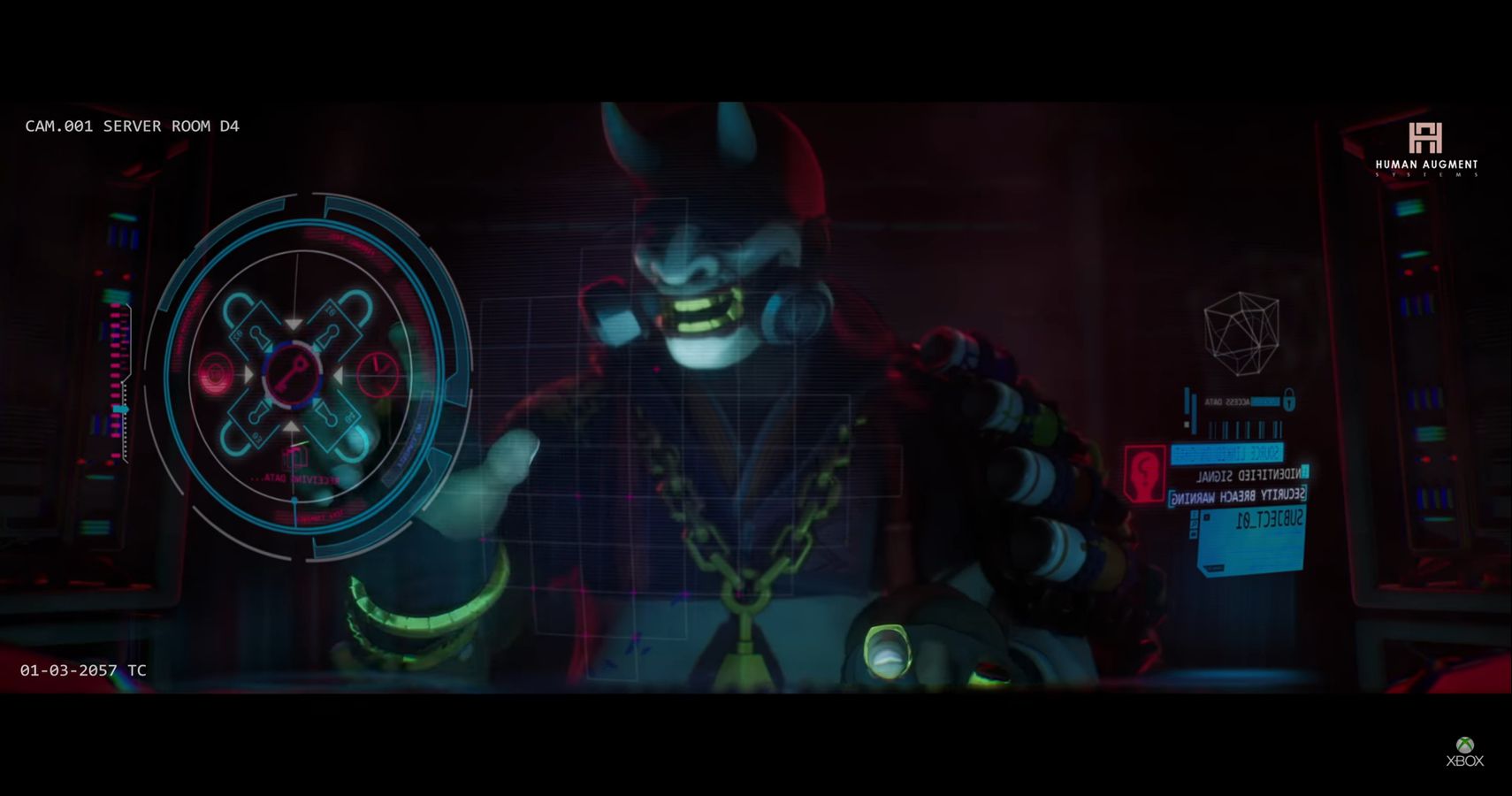 As a multiplayer-focused title, there isn’t much of a narrative in Bleeding Edge. These characters are all misfits who have been enhanced with illegal genetic modifications and augmentations. As a result, they’ve been shunned by society and branded as criminals due to their superhuman abilities and proficiency in hacking corporations. So, naturally, as a response to this, they all start up a fight club and battle each other to death in an elaborate bloodsport. Yeah, that will teach those boring old normies for viewing them as dangerous, violent maniacs!

The matches are four on four battles with a selection of 11 characters and 5 maps to choose from with more to be added in later. Right now, there looks to be only two game modes available. The first is your standard capture the point mode that you’ve seen in many other multiplayer games. An area lights up, you and your team rush to get it, and then fight the other team to hold it. The other mode involves collecting power cells and then dropping them at a designed location in order to score points.

The best thing that Bleeding Edge has going for it is its combat. These heroes all play quite differently from each other and it shouldn’t be hard to find at least one that matches up with your gameplay style. Some of them even have some pretty unique abilities that I haven’t seen before in a hero shooter. The player can get up close for some straight-up character action fighting, play from a distance with some of the ranged heroes, or be your team’s healer and try to support them from the sidelines. Teamwork is incredibly important and it’s a good idea to try to strategically select the character that best fits your current team.

Easy To Pick Up, Even Easier To Put Back Down 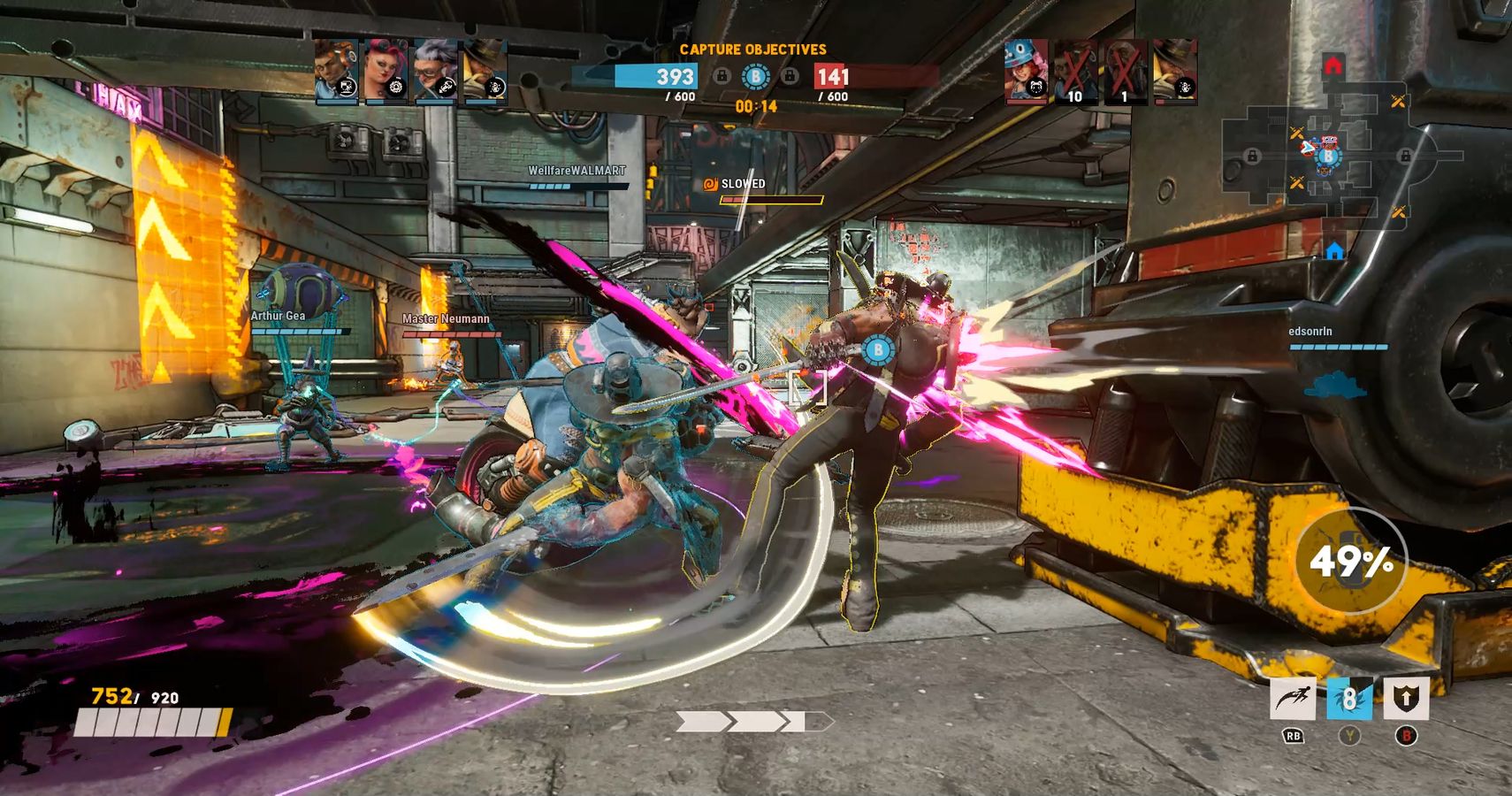 The gameplay is solid, but unfortunately, that’s probably not going to be enough to keep Bleeding Edge‘s audience invested. The major, glaring flaw with this game is that there isn’t much of a reason to keep playing after you’ve dug in for a few hours. There’s a small number of maps and playing the scant two modes on them quickly grows tiring. It wasn’t very long before I reached a point where I felt like I had seen everything this game had to offer. That feeling is a death knell for a multiplayer game.

Games like Overwatch or Apex Legends have a lot more depth and content that keep players coming back time after time. Hero shooters need to have a sense of progression, experimentation, and exploration to become viable, long-term obsessions for online multiplayer fans. But with Bleeding Edge, there’s just not enough to do or work towards. There is some solid fun to be had here, but after you’re done with it there isn’t much to draw you back in.

There’s also a surprising amount of framerate issues present at launch. It’s not uncommon to be in the middle of a combo chain and suddenly have the game hitch or stutter. A title like this needs to move as smooth as butter, and having any kind of lag or interruption in a skirmish with the enemy team is enough to severely hurt the flow of gameplay.

Even Reboot Dante Would Find This Lame 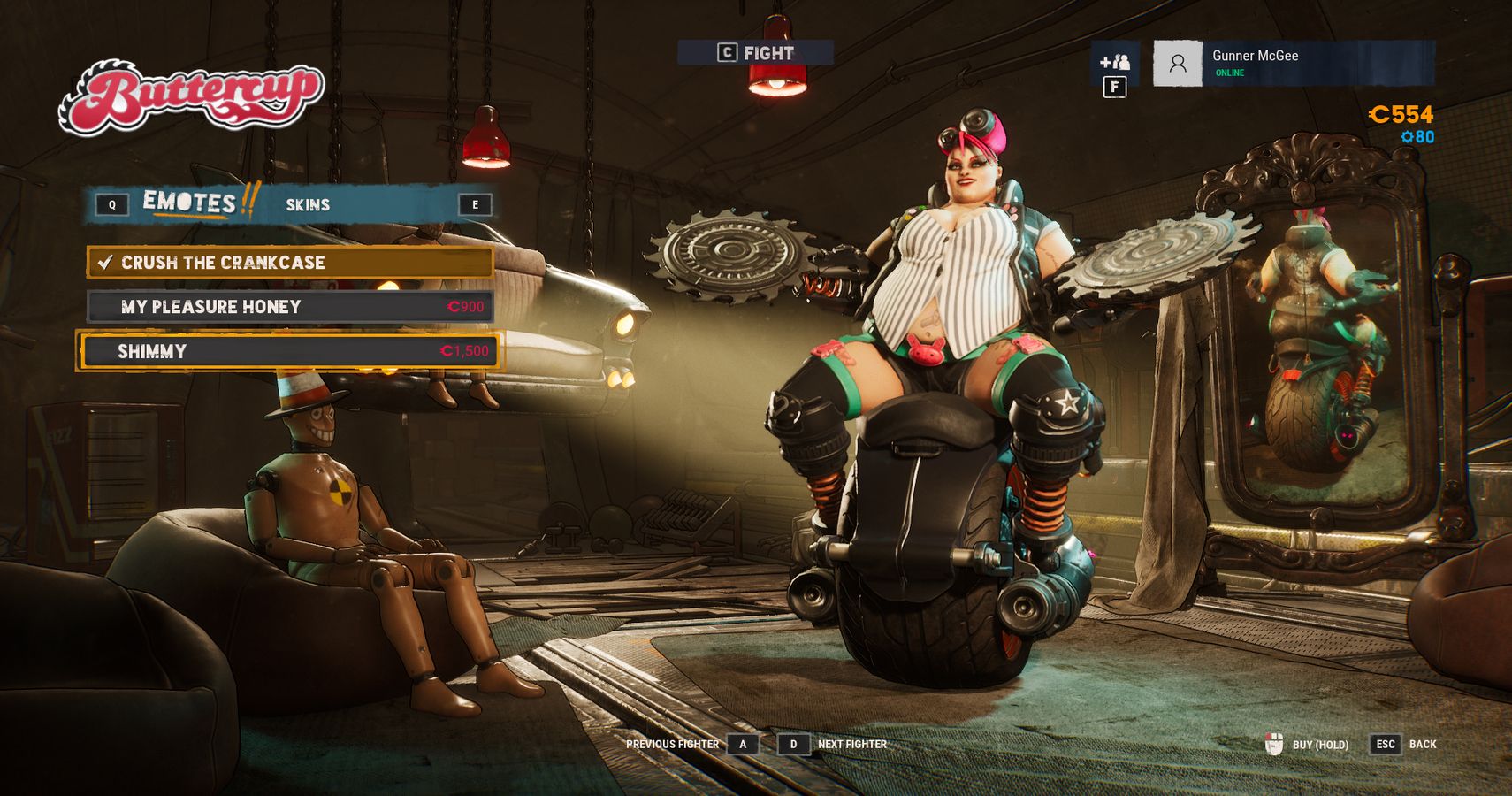 The other thing that doesn’t help Bleeding Edge is its rather cringey style. The game is trying its best to replicate the edgy visuals and attitude that you’d find in titles like the Borderlands series or Rage 2. There are lots of vibrantly colored levels covered in graffiti, a teensy bit of cel-shading, and “cool” characters who all seem to say some variation of, “Yeah, let’s rock,” as well as a cavalcade of sarcastic, totally radical quips. It feels like a game designed to appeal to teenagers by the advertising team that works for Mountain Dew. This style was played out back in 2014 when Sunset Overdrive did it, but games keep trying to go for this ironic, internet culture aesthetic so they can be cool and get turned into memes. Yet, in a most ironic twist, a game that tries too hard to be cool often winds up being the lamest thing of all.

Speaking of the characters, while they do offer up some interesting skills and gameplay options, the vast majority of them aren’t all that interesting to look at or hear from. They’re mostly a generic bunch with the odd, out-there design that stands out from the rest (namely Kulev, the weird voodoo zombie with a talking, robo-snake for an arm.) A hero shooter needs likable, original characters, but it’s highly unlikely that anyone will be drawing fan-art of people like Daemon or El Bastardo.

The Bleeding Edge Of Meh 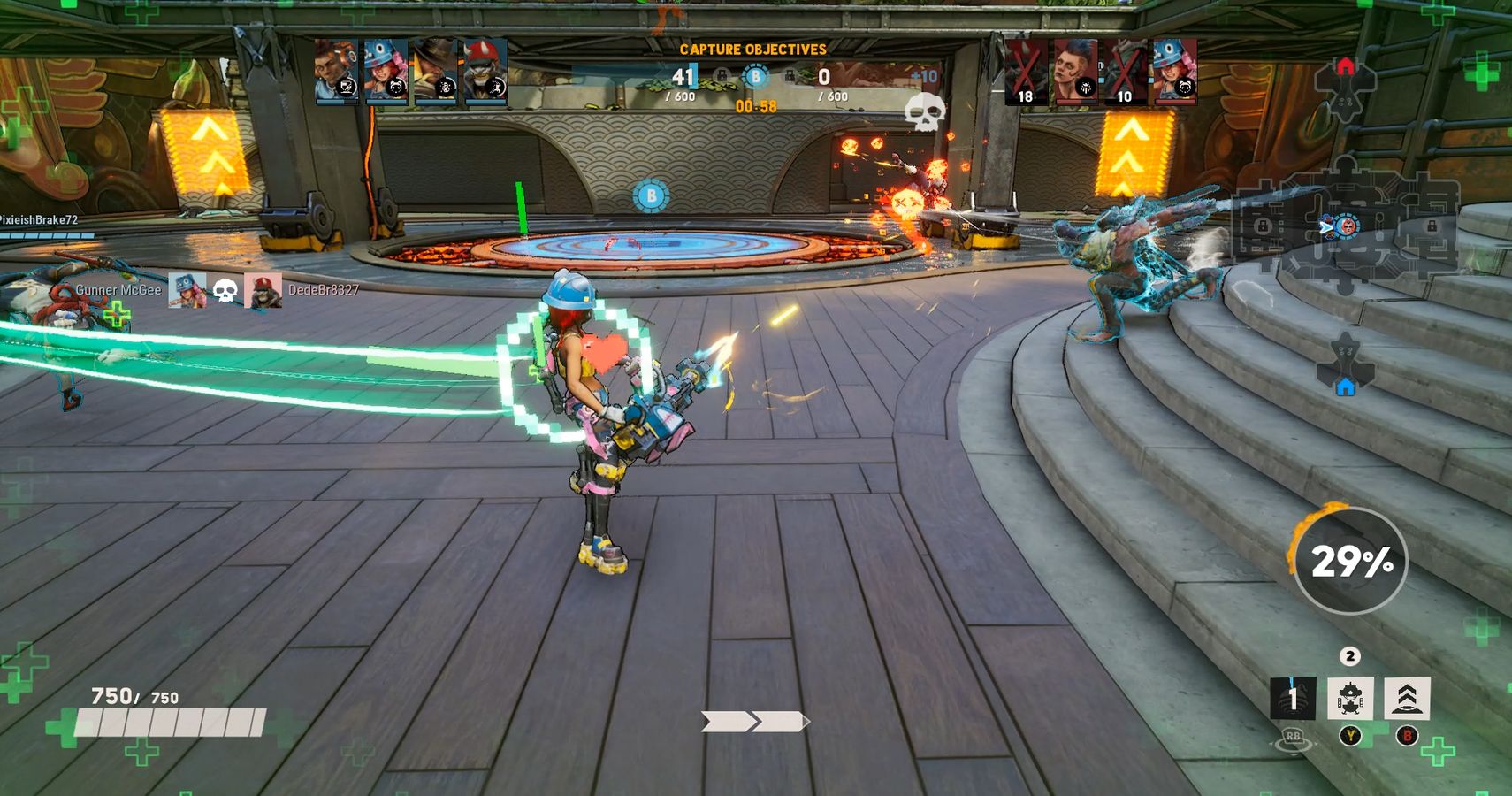 It’s disappointing that Bleeding Edge doesn’t have much going for it. There’s a super solid concept here and the idea of a hero shooter mixed with a third-person action title is one that can definitely work. The combat system is good and there’s a chance that some players might get hooked by the game in its current form. But it needs so much more content to become a viable multiplayer mainstay. It’s easy to get rapidly burnt out and then put it down for good. There’s not much that can be done about the game’s “totally tubular” attitude, but if Ninja Theory adds in more characters, maps, and modes then maybe it might become something that warrants your time and attention.

However, as of right now, Bleeding Edge has some positive qualities, but it’s certainly not on the bleeding edge of the multiplayer scene.