The ending of Doom Eternal

I’ll give it to the developers at id Software. They really know how to stretch out an ending. I’ve played through Doom Eternal on the easy setting, and I’ve included two videos of the actual ending in this post. And it feels like he ending goes on for a long time, especially if you die a lot.

Now it’s not so bad as Death Stranding’s ending, which involves hours of cinematics. Or at least it feels like hours of cinematics. But Doom Eternal also takes a pretty long time to say goodbye to you. And yes, this is me playing. Dean Takahashi. I finished the game that the internet said I couldn’t play. I was done five days ago, but decided to run this piece after more players had finished the full game.

And that’s OK, because the gameplay of this first-person shooter from Bethesda is so enjoyable. I don’t know how many hours I spent on the game, but it was a lot. I felt like I killed a thousand demons on my way to the end. And there were times when I thought I was close to being done, only to find there was some more work to do. I’ll talk about that, but I have to warn you there are spoilers in this story.

Here’s my full review of Doom Eternal, and my tips and tricks. I’m obviously not a good player, and I’ll get that out of the way now. In this game, I clearly didn’t outsmart my enemies during the final moments. I just wore them down. 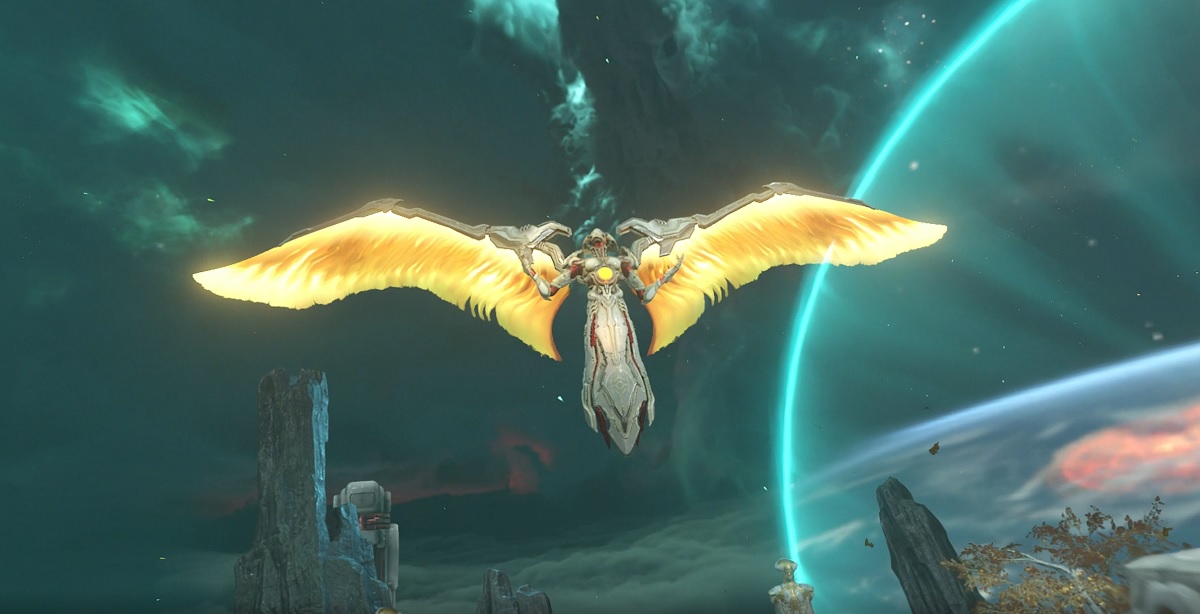 Above: Khan Maykr is the second most-annoying boss in Doom Eternal.

Now why are we fighting the Khan Maykr? Well, that’s a long story. Some of it gets conveyed to you in the cinematics, sparse as they are. But you can only get the full story if you read the Codex, or the pages of backstory that you find in hidden places along the way. These pages are easily skipped if all you care about is combat.

But I thought the story was very intricate. It goes back to a city, Urdak, which is occupied by celestial, or hellish, beings called Maykrs.

The Khan Maykr is the ruler of Urdak and the Maykrs. She has the collective consciousness of all of the Maykrs embedded within her. She is supposed to give up her title and be replaced at some point, but the process has gone off the rails. The Maykrs have an alliance with the excellent fighters, the Argenta, who in turn worship the Maykrs. The Argenta are led by the Night Sentinels. There’s a prophecy that an Unholy One would rise from the Argenta and destroy the Maykrs. Evidently the soldier known only as the Outlander is the prophesied one, and the Maykrs are trying to uncover who that is.

The Doom guy rises from the ranks of the gladiators, gets promoted to be one of the Night Sentinels, and helps the Argenta and the Maykrs fight bank the invading demons. The demons had something called Essence that the Khan Maykr and her priests discovered could be used to improve their fighting ability. They used this Essence to drive the demons back. But the demons get the upper hand again, destroying the city of the Night Sentinels. All seems lost, but the Doom guy saves the day, as he is enhanced by something the Maykrs do to him.

As they regain their way into Hell to fight the demons, the Night Slayers discover a betrayal. The Khan Maykr’s Essence, and the energy that powers the Argent people, is made up from the souls of dead people. Anyone who dies goes to Hell, and that soul is tortured until it turns into the energy that keeps the Maykrs alive and the Argent forces powerful. The Doom guy and others rebel. The Maykrs team up with the demons, and the Night Demons are destroyed, thanks to one known as the Betrayer. As a result, the demons gained victory.

The Betrayer wanted the torture of his son to end, but he learned he had been tricked. The demons resurrected the son as a gigantic demon known as the Icon of Sin. The Doom guy gets lured into a sarcophagus and gets trapped.

In Doom 2016, the scientist Olivia Pierce opens a portal into Hell from Mars. She unearths the Doom guy but falls under the spell of the demons and allows them to attack Mars. The Doom guy is awakened by Samuel Hayden, the UAC chairman, and he pushes the horde back. The Doom guy kills Pierce.

The Khan Maykr, meanwhile, needs more Essence. To get it, she unleashes Hell on Earth, and uses the Essence from the death of billions of lives for her factories. The Doom guy starts out Doom Eternal in a Sentinel ship called The Fortress of Doom. Then he goes to stop the invasion and turn back the plans of the Khan Maykr.

As the Doom guy in Doom Eternal, you are getting your revenge. You first go after the priests. Then you reach Khan Maykr and battle her. And finally, at the very end, after battling a bunch of demons again, you fight the Icon of Sin.

When you take down Khan Maykr, it sure feels like you’ve fought the boss at the end of the world. But she’s just a dress rehearsal. While it takes a long time to do that, you have to transport yourself back to Earth, where you have to find The Icon of Sin, a giant beast that has heavy armor.

But once you get there, you have to battle your way to the top of a building. And that battle is filled with all of the beasts you’ve fought before, like those horribly difficult Marauders. You have to deal with Pinky Demons, Cacodemons, and The Baron of Hell (there’s a bunch of these guys). Once you’ve battle your way to the end game, you’re exhausted.

The final demon is a huge monster, The Icon of Sin. and it can spawn a bunch of demons that will keep you busy. You have to take out its armor first and then take it down. That’s easier said than done.

It is easy to get distracted from this task because the Icon of Sin spawns so many demons on the multi-level battleground that you occupy at the top of a building.

If you’ve saved your BFG ammo, that was wise. You can use that against the icon, and then you can pick up a few more BFG ammo in the first stage. Once you knock out enough armor from The Icon of Sin, it retreats, and you chase after it.

In the second stage, you get a respawn of important items, such as the ammo for your BFG.

In the second stage, there are huge numbers of demons, but there’s also a nearly unlimited supply of ammunition. At the end, don’t be surprised to see 10 Cacodemons and a half-dozen Pinky Demons chasing you, as you try to get a few shots off at the Icon of Sin. This is Doom as you’ve always wanted to play it: powerful, and fast.

You can pick up yellow items that give you a Blood Punch, or a one-punch kill for weaker demons and those who are nearby. There are also a lot of difficult bosses that hit you, one after another.

Fortunately, you have a lot of Crucible (one-shot kill swords) items that respawn.

You should use the Crucible liberally on the big enemies, such as the Revenant, Arachnotron, Hell Knight, the Dread Knight, the Mancubus, the Cyber Mancubus, and the Pinky. It’s quite satisfying to slice them in half with one stroke that doesn’t cost a lot of time.

If you run around enough and eventually take enough pot shots at The Icon of Sin, you’ll finally bring it down. But it’s a long battle. I enjoyed the battle, as well as the game.