The world has been shaken up by the coronavirus, and the global startup community is no exception. Startup Genome has issued the first installment of reports that it plans to do on how startups are being affected since the onset of COVID-19.

The company found that Chinese venture capital deals fell 50 to 57 percentage points in the first two months of the year, since the onset of the crisis, relative to the rest of the world. If a drop like that happens globally, even for just two months, approximately $28 billion in startup investment will go missing in 2020, with a dramatic impact on companies, based on extrapolations of data collected by Pitchbook and Startup Genome.

“As our world is shaken in the most dramatic way imaginable, it is time for our global startup community to get closer, support, and learn from each other,” said Arnobio Morelix, chief innovation officer at Startup Genome, in an email to VentureBeat. “Some of us remember the crash of 1987, the dot-com bubble burst of 2000-2001, and the 2007 financial crisis. With COVID-19, not only is the economic crisis sudden, the human impact is also horrific.” 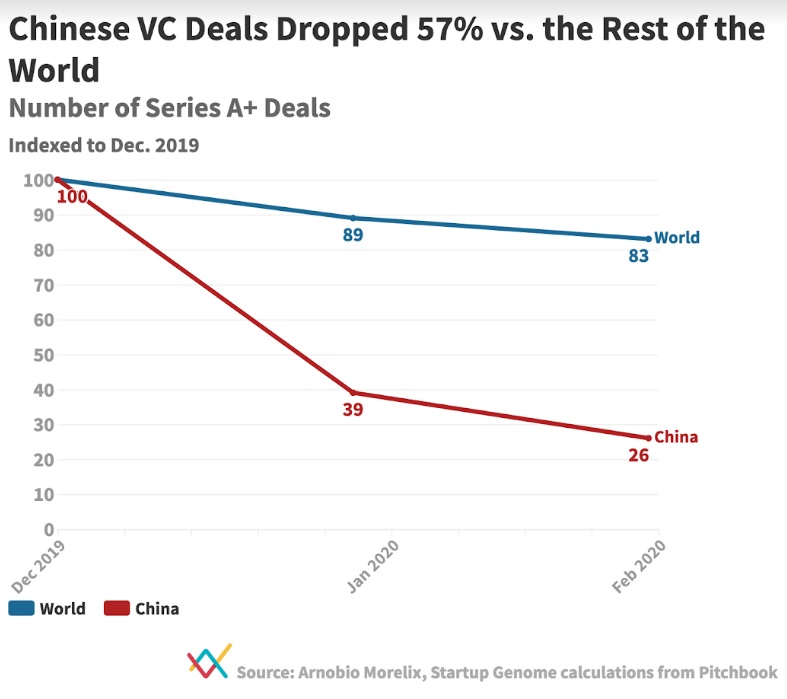 Above: Chinese VC deals have plummeted.

If the drop in investments continues much further beyond two months and the COVID-19 shocks trigger an economic contraction, the previous two recessions (2000-2001 and 2007-2009) can serve as historical analogies for the current moment, Morelix said.

After the past two recessions, global VC investments took one (2007-2008) and three (2000-2001) years to recover to pre-contraction levels. Relatedly, technology IPOs in the U.S. dropped by 90% following the last two recessions.

But crisis begets opportunity in more than one way, Startup Genome said. During the past two recessions, although fewer dollars were invested, more companies got funded, suggesting that businesses that are able to become cash efficient might become even more likely to raise money following a recession, albeit at lower valuations and lower total funds raised. 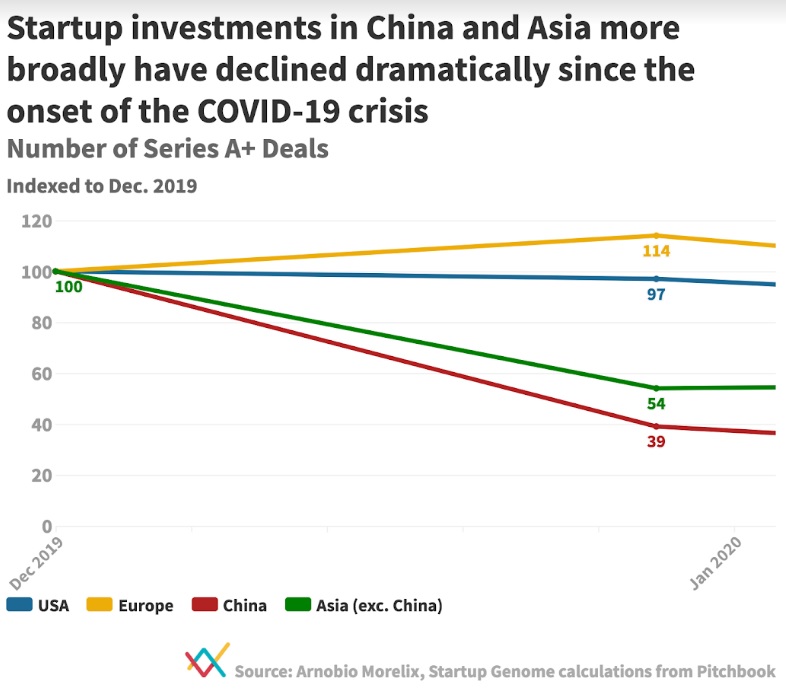 Above: Asian VC investments are falling

In addition, over half of Fortune 500 companies were created during a recession or bear market, and over 50 tech unicorns, collectively valued at $145.2 billion, were founded during the 2007-2009 recession years. These include Airbnb, which was created because the entrepreneurs behind it could not afford to pay rent at the time.

New and young firms are the main net job creators in the economy, and this is especially true during recessions, when older firms are net job destroyers. Recently, the U.S. saw unemployment insurance requests hit 3.3 million people in a single week: the highest such number recorded since 1967, when the Department of Labor started publishing figures on this. This need for net new jobs means the economy needs startups now even more than usual. 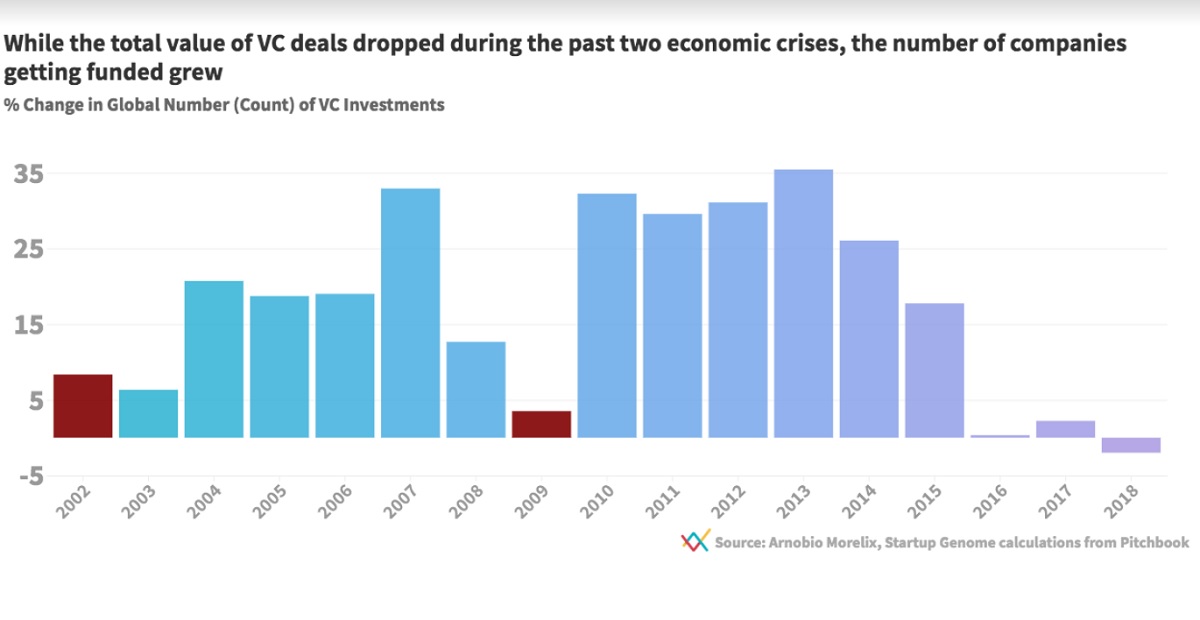 Governments in many places around the world are helping founders through these difficult times. Denmark, for example, is covering 75% of salaries for companies that do not cut staff, while Germany is offering to cover 60% of the new salaries for employees reduced from full to part time.

Startups are laying off people 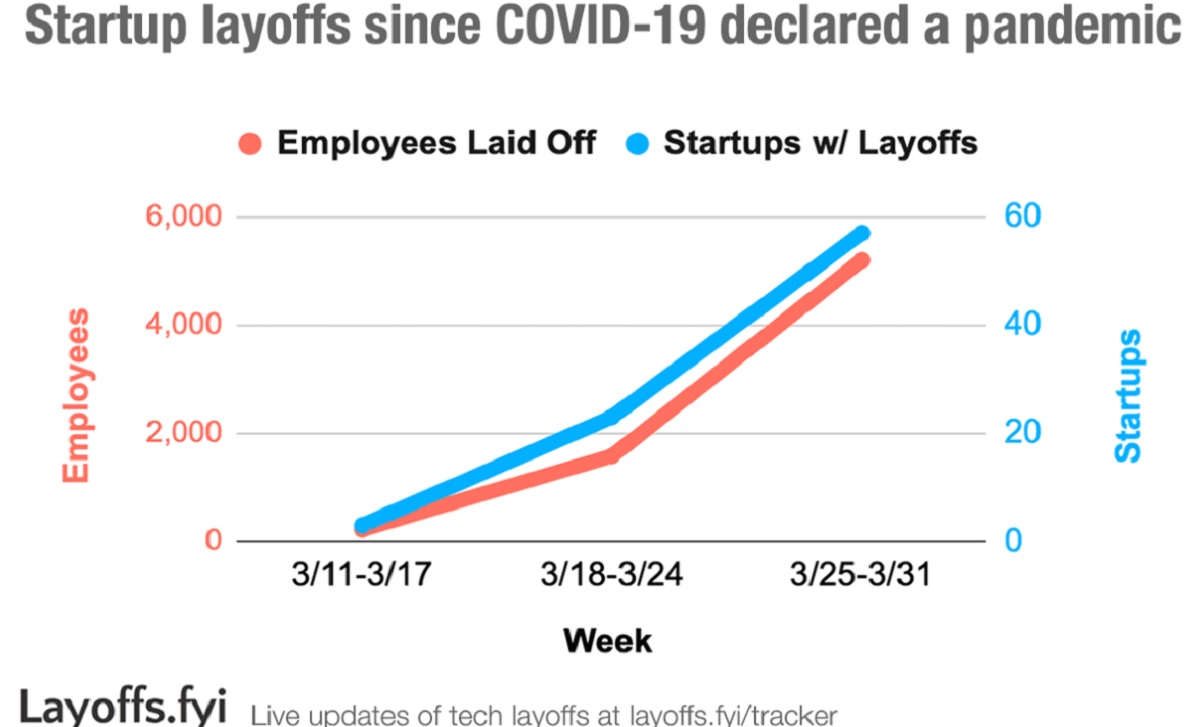 Above: Layoffs.fyi has live updates on startup cutbacks.

Meanwhile, a separate source of data comes from Roger Lee at Layoffs.fyi, which has begun tracking startups that have laid off employees. The Layoffs.fyi Coronavirus Tracker has tracked 82 startups that have laid off a total of 7,000 employees since the coronavirus was declared a pandemic on March 11. This one tracks only the verified numbers, but the rumored count is about twice as many. It’s only been three weeks so far, but the layoffs are growing week over week. The lion’s share of the startup layoffs are in the San Francisco area. 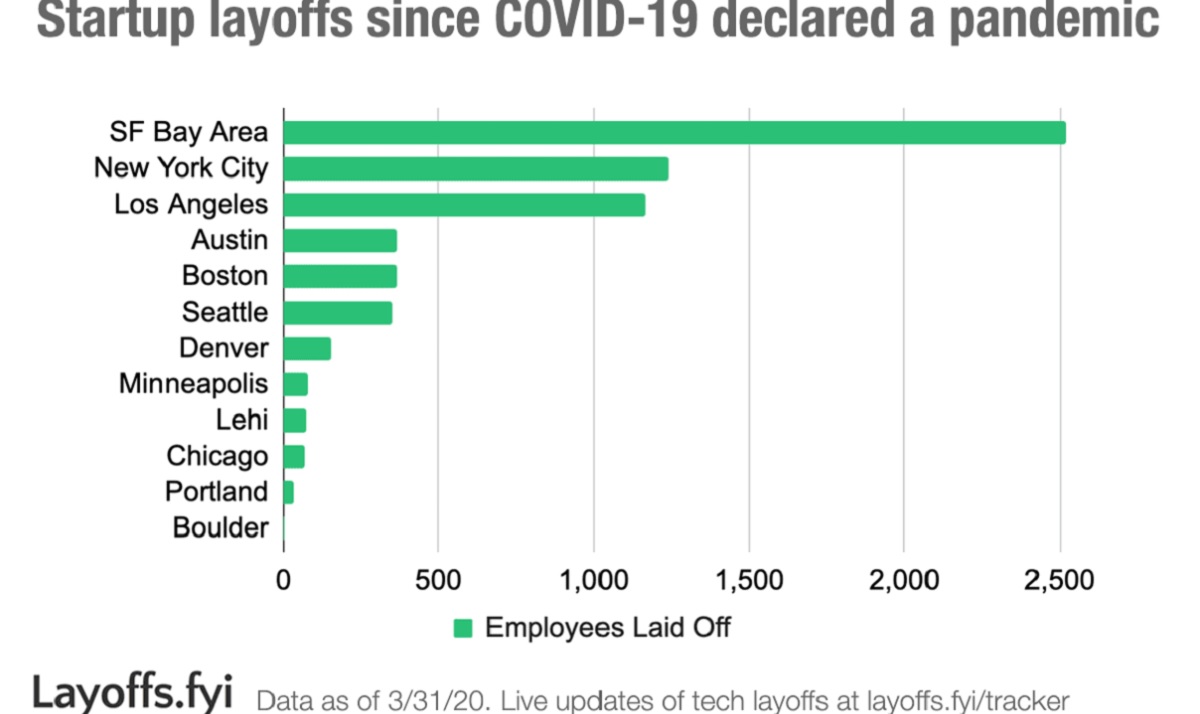 Above: Layoffs.fyi says startup layoffs after the pandemic are concentrated in SF.

Nick Bunker, economist at job site Indeed, said in an email, “Demand for tech workers appears to be slowing down, but is doing relatively better than the overall labor market. The trend in job postings for software development jobs titles is down 5.8% from the same time last year, as of March 27. Compare that to the trend in overall postings in the U.S., which is down 15.2% from last year’s trend.”

According to Startup Genome, China’s industrial output already dropped 13.5% in January and February, while retail sales decreased by 20.5% year-on-year. The drop in VC total investments was even more acute, at between 50% to 57%. China saw the biggest drop in funding, followed by the rest of Asia. This is not surprising considering the importance of Chinese capital throughout Asia’s startup ecosystems and the fact the virus hit Taiwan and Korea in January.

It’s important to note that this drop in VC deals is not a seasonal dip due to the Lunar (or Chinese) New Year, Startup Genome said. The previous three years show an equal or higher number of deals in January as compared to December.

Nonetheless, there is reason to be optimistic about economic restarts following the shutdowns, Startup Genome said. China, the place first hit by the virus, is slowly coming back to work: offices are being used again — as we see from Startup Genome’s ecosystem partners in the country — and manufacturers like Foxconn (the maker of most of iPhones in China) announced they will be back to normal production schedules around now. Supporting this trend, LinkedIn data shows Chinese hiring slowly rebounding, though not anywhere near the previous levels.