A similar version of Curious Obsession was revealed in today’s Theros: Beyond Death spoilers, but it’s uncertain if Staggering Insight can fill Obsession’s shoes in MTG Standard.

Set to release on Jan. 24, Theros: Beyond Death (TBH) returns Magic players to the Greek-inspired plane. The set will usher in the return of Perisophia, the Philosopher, a favorite of the God Ephara, who’s typically associated with the colors UW (Blue and White). She’s featured on the TBH Enchantment–Aura, Staggering Insight, which seeks to fill a hole left by Curious Obsession in the Standard format. 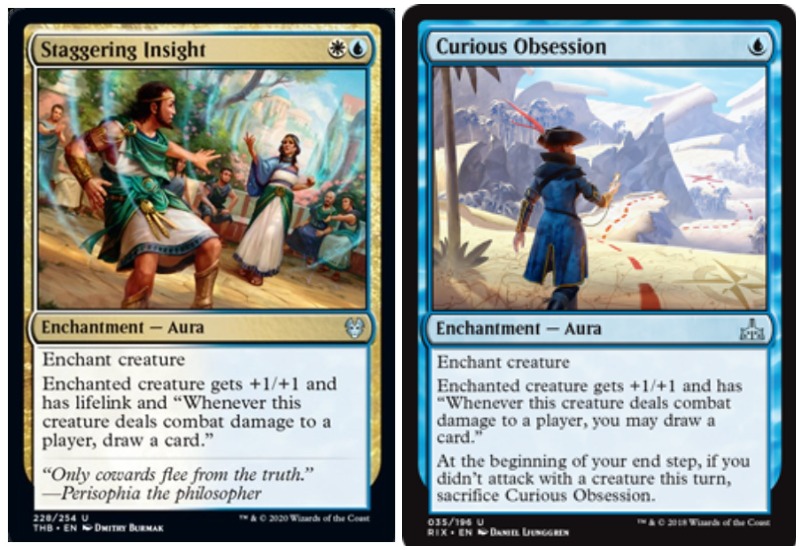 Both cards are Enchantment–Auras, enchanting a creature with +1/+1 and providing cantrip via combat damage dealt to an opponent. But that’s where the similarities end.

The mana cost of Staggering Insight is UW, whereas Curious Obsession costs one Blue mana. It’s not a staggering difference, but it’s an important one. Curious Obsession was a solid fit in Blue decks prior to Standard rotation because of its single mana casting cost, allowing a player to leave mana up for a counterspell if necessary. Lands left untapped could also be used to cast spells like Dive Down and Spell Pierce for protection—also one-cost mana spells.