Catching up with Beatrix LeBeau on a beautiful new ranch on Rainbow Island, with cute new slimes, new items, and, wait — no, my slimes are starving, oh they’re escaping, they’ve turned into Tarrs. Oh god, no. What have I done? It’s surprising how, when I started Slime Rancher 2, I had blocked out the panic-driven rinse and repeat routine of getting my slimes food and providing for them before all hell broke loose on my ranch, but it all came flooding back to me in goopy black Tarr style.

I was so fixated on collecting all the adorable new slimes that I wasn’t putting enough thought into the fact I had to keep them all fed and happy. I made the rookie mistake of not investing in enough food sources on the ranch, opting for more corrals instead to expand how many slimes I could have, which then forced me to go out and forage for food in the wild. An absolutely daft plan.

Once I was back in the swing of things properly and putting a little more forethought into my layout, I was happy to return to ranch life. The core mechanics of the game are much like its predecessor: you collect slimes, feed them so they poop out plorts, then sell the plorts for cash. You use your income to grow your ranch and slime collection, expand your base of operations, upgrade corrals and your vacpack, and explore more of the map to uncover all those little secret areas and slime lore. 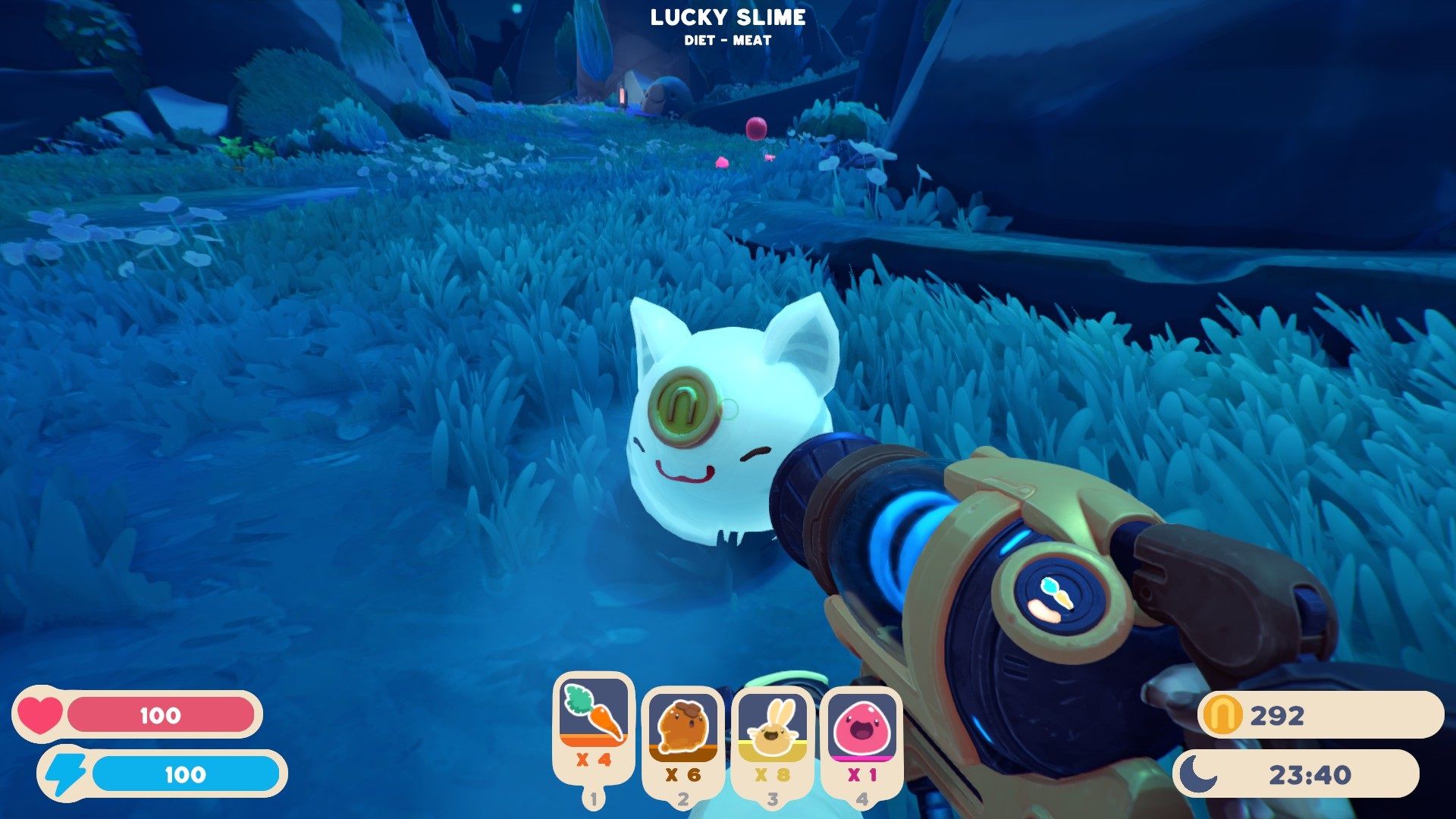 Despite being in early access, there’s a lot of ground to cover in Slime Rancher 2, literally. The available map is more expansive than I was expecting, with plenty more to still be revealed at launch. It’s the same with all the content, there are lots of slimes to farm, but not the full roster yet — presumably, some of the unreleased slimes will be found in areas we can’t reach yet. You can get a good taste of the story through exploration and your phone calls with side characters, but it’s not complete. This is all standard early access practice. Unless you’re one of the people who somehow bypassed all the early access messages, and so you’re now playing it and complaining it’s incomplete. Suck it up, pun very much intended.

Much like the original, the thing I love the most about Slime Rancher 2 is that it’s all too easy to lose yourself in this beautiful game for hours on end. You’ll be busy exploring and collecting slimes, working towards the goal of expanding your ranch, and before you know it, you’ve sunk hours and hours into playing. The environments also feel even more vibrant and clean-looking this time around, with moments such as a sunrise over certain areas causing me to stop in my tracks and screenshot like there’s no tomorrow. The game retains its signature quirky, cute style while providing a glow-up to the world and all the slimes who live there.

Slime Rancher 2 doesn’t just give us more of the same with the benefit of more variety, it also ups the ante in more ways than one. It’s not as simple to get upgrades now, as they require more than just cash, so you have to go out and hunt down specific materials and plorts for each upgrade. With new resources included, some of which are pretty rare, this means kitting out Beatrix with the best gear isn’t an easy feat. 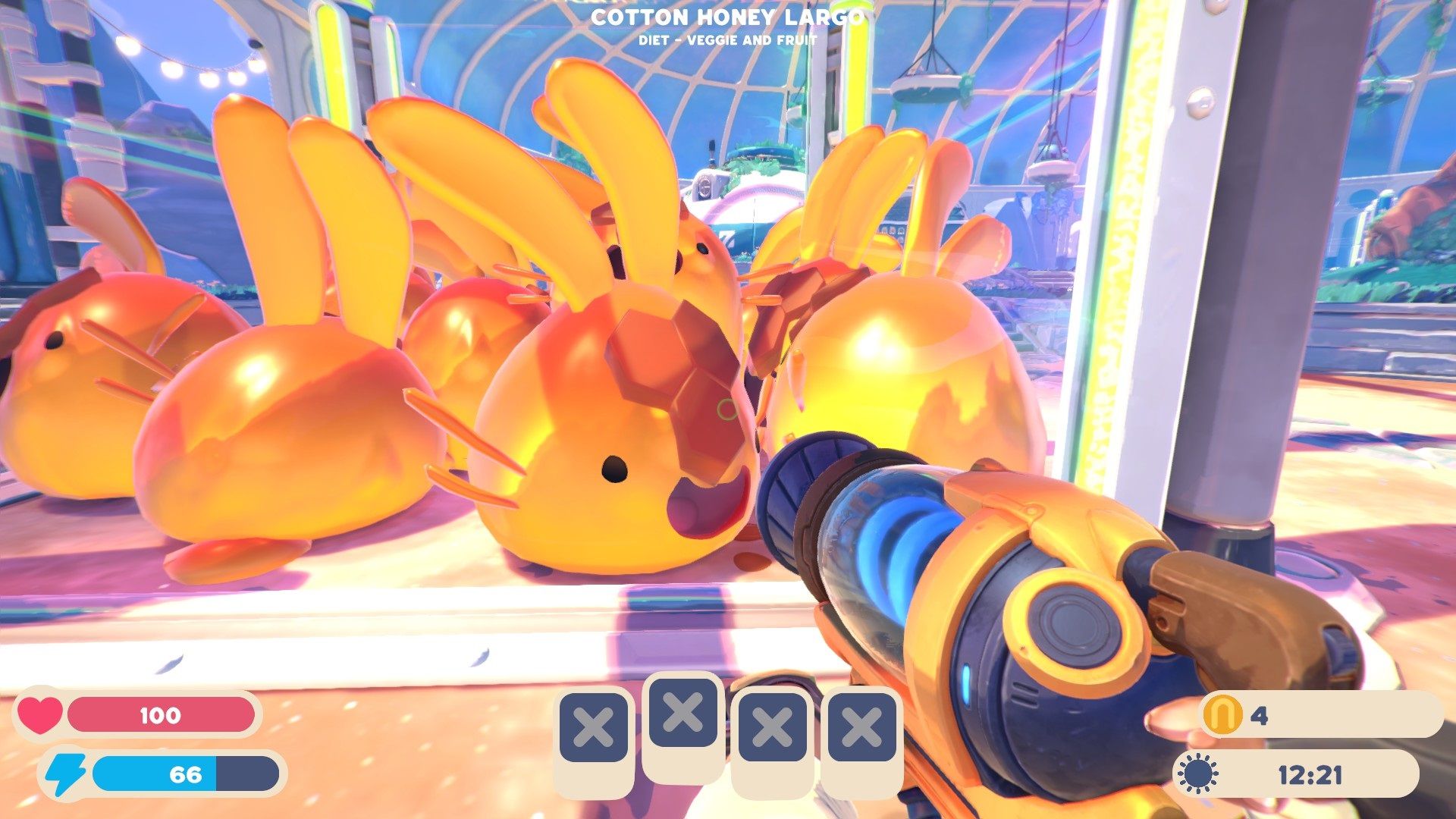 In the first game, I avoided farming largos despite the plort payoff being more efficient. A combination of two slimes, largos are the result of one slime eating the plort of a different slime type, and they poop out two plorts for the price of one. However, due to their size, you can’t vacuum them up, and they’re harder to keep contained. More importantly, largos are only one step away from disaster, as if they eat yet another different plort type, they become the cannibalistic Tarr monstrosities that wreak havoc on your ranch.

In Slime Rancher 2, I found you really have to get into the largo business to keep your ranch afloat. I struggled to keep all of my slimes fed while still making a decent profit. Using largos meant broader diets per slime, so they’re easier to keep fed and happy, and more plorts to sell too. In short, I feel like Slime Rancher 2 pushes us to be better ranchers by making things just that little bit harder. Or maybe I’m just rusty at ranching.

Slime Rancher 2 is a promising start to a sequel that expands on the original in every way. It doesn’t break the mould just yet, but I don’t think it needs to. It takes everything we love about the first title and gives us more. If it continues to use that simple formula for the full launch version, I’ll be happy.