After what’s felt like an eternity, Animal Crossing: New Horizons is finally available for the Nintendo Switch. Hardcore players have been excitedly posting screenshots of their islands and its villagers on social media since the game was made available at midnight, and so far reactions to the title have been overwhelmingly positive.

But beyond cute screenshots of everyone’s island, some players have noticed some clever Nintendo easter eggs hidden in the game. A couple of eagle-eyed players have posted their findings on Reddit, showcasing a couple of references to another fun video game, Splatoon. 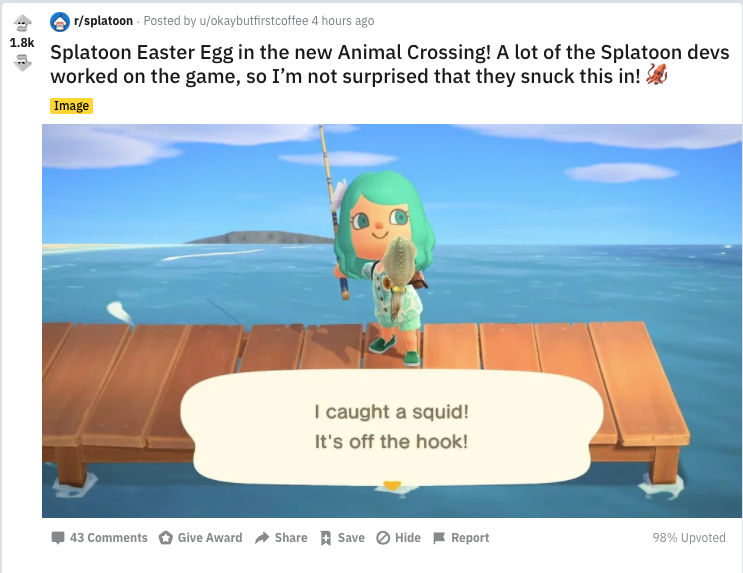 Fans of the third-person shooter game franchise Splatoon will recognize this reference to the famous pop idol duo Pearl and Marina, who go by their duo name “Off the Hook.” The duo appears from both Splatoon titles, even taking over as the hostesses of Inkopolis News in Splatoon 2. Their catchphrase “Don’t get cooked… Stay off the hook!” is a familiar one to Splatoon fans.

This clever reference whenever a player catches a squid is also a reference to the nature of Splatoon, which takes place in a world filled with anthropomorphic and cephalopodic creatures known as “Inklings” who resemble squids.

Amazingly, this is not the only reference to Splatoon players have found so far. Another Redditor u/bliss_cx posted another screenshot of their villager talking to Blathers, the director of the Museum, who suggests the following: “How would we resolve differences? Perhaps some sort of ink-squirting contest of companions?” 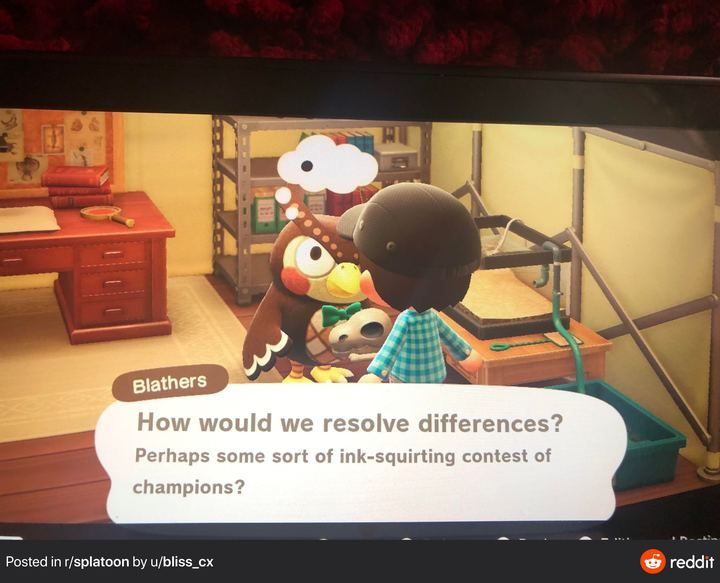 This is also a direct reference to the Splatoon franchise, where players engage in different ink-squirting competitions against their opponents. Is Blathers also an avid Splatoon player? Or has he been talking to the squids in his museum..?

As Reddit user u/okaybutfirstcoffee points out in their post, a number of developers who worked on Splatoon also worked on Animal Crossing: New Horizons, so it makes sense to see this call-out in this game, even if it takes place in a completely different universe.