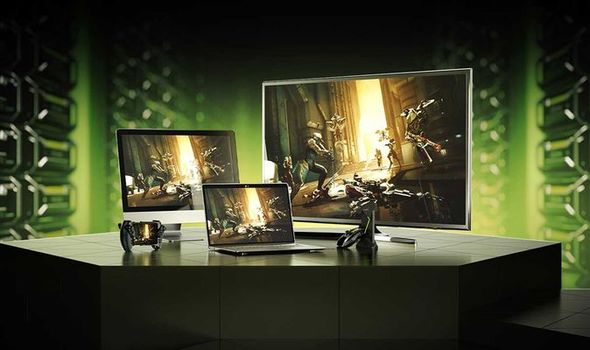 Sony, Microsoft and Nintendo are facing a new contender in the world of video games, following the launch of GeForce NOW earlier this year.

The new streaming platform has been adopted by over one million users, which sounds like a decent start for any cloud gaming service.

Gamers can enjoy titles from a number of different sources, such as Steam and the Epic Games Store, and play them via the internet on phones and Laptops.

It makes for a compelling new service, which is available using a free tier and premium membership.

GeForce NOW has launched in the same year as the PS5 and Xbox Series X are expected to launch.

And that creates just another new rival to face in the increasingly packed video games market.

But while GeForce NOW is off to a good start, it’s also facing challenges that the PS4, Xbox One and Nintendo Switch don’t have to deal with.

First of all, the way in which GeForce NOW works means that existing licenses for video games can be used.

This means that you don’t need to buy the same game twice to run it though GeForce NOW. Some gamers have compared it to Sony’s PS4 and Remote Play function, which allows gamers to stream from a PlayStation console.

But not all game providers are happy with the current situation and have started to withdraw games from GeForce NOW. This is something that Nvidia warned of as the service went live, with some publishers expected to pull out.

So far, we have seen companies like Activision Blizzard and Bethesda have stopped supporting GeForce NOW. And this week has seen Nvidia confirm that the latest publisher to follow suit it 2K Games.

“Per publisher request, please be advised 2K Games titles will be removed from GeForce NOW today. We are working with 2K Games to re-enable their games in the future,” a message from Nvidia confirms.

It’s a huge blow for the new service, with other platforms like PS4, Xbox One and Nintendo Switch remaining unaffected.

It could certainly put gamers off signing up to the new service if they are unable to play their favourite games.

Meanwhile, Project xCloud and PlayStation Now will continue to offer alternatives on Microsoft and Sony platforms.

The good news for fans of GeForce NOW is that Epic Games is very much in favour of the new service.

CEO and founder of Epic Games, Tim Sweeney, has confirmed that they will continue to allow Fortnite to be played via GeForce, with support also coming from the Epic Games Store.

Sweeney told fans on Twitter: “Epic is wholeheartedly supporting NVIDIA’s GeForce NOW service with Fortnite and with Epic Games Store titles that choose to participate (including exclusives), and we’ll be improving the integration over time.

“Cloud streaming services will also be key players in ending the iOS and Google Play payment monopolies and their 30% taxes.

“Just waiting till later this year when Google is lobbying against Apple for blocking Stadia from iOS, while Google blocks GeForce NOW, xCloud, and Fortnite from Google Play, and this whole rotten structure begins collapsing in on itself.”

There certainly appears to be enough support out there to help Nvidia to weather the initial storm alongside the PS4, Xbox and Nintendo Switch.