Wizards of the Coast dropped another Theros: Beyond Death spoiler today, teasing the return of Titans to Standard.

A second Saga from the upcoming Theros: Beyond Death (THB) set has been revealed. Although it isn’t overly powerful, The Binding of the Titans Enchantment-Saga could help Titans make a comeback in the Standard format. 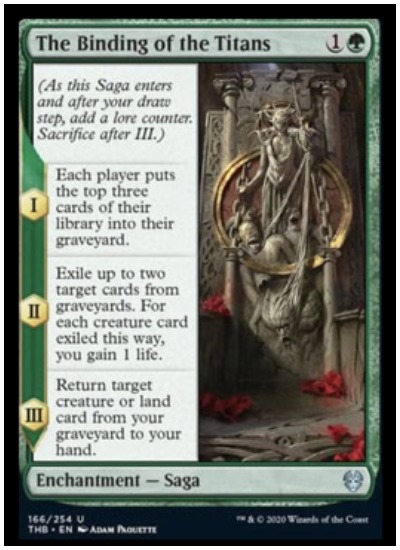 The Binding of the Titans, like all Enchantment-Saga’s in MTG, has steps that activate after a controller’s draw step over the course of three turns.

Through the reveal of The Binding of the Titans, some people in the MTG community are speculating a Titan cycle may be included in the THB set. The Titans would either be of Rare or Mythic Rare rarity since it’s already speculated that there’s a cycle of Rare Mono-colored Gods on the way, too.