Monster Hunter Rise's Title Update 2 just released, and with it, new missions, layered weapons, and monsters! Three new foes have been introduced with this update, bringing new challenges to the table and tweaking some already-known monsters with some unexpected twists.

The first newly introduced monster will be a subspecies of the classic Espinas, called Flaming Espinas. This black-and-red variant will be way more aggressive in behavior and will employ more Fire-type attacks than its counterpart, and here's everything you need to know about it! 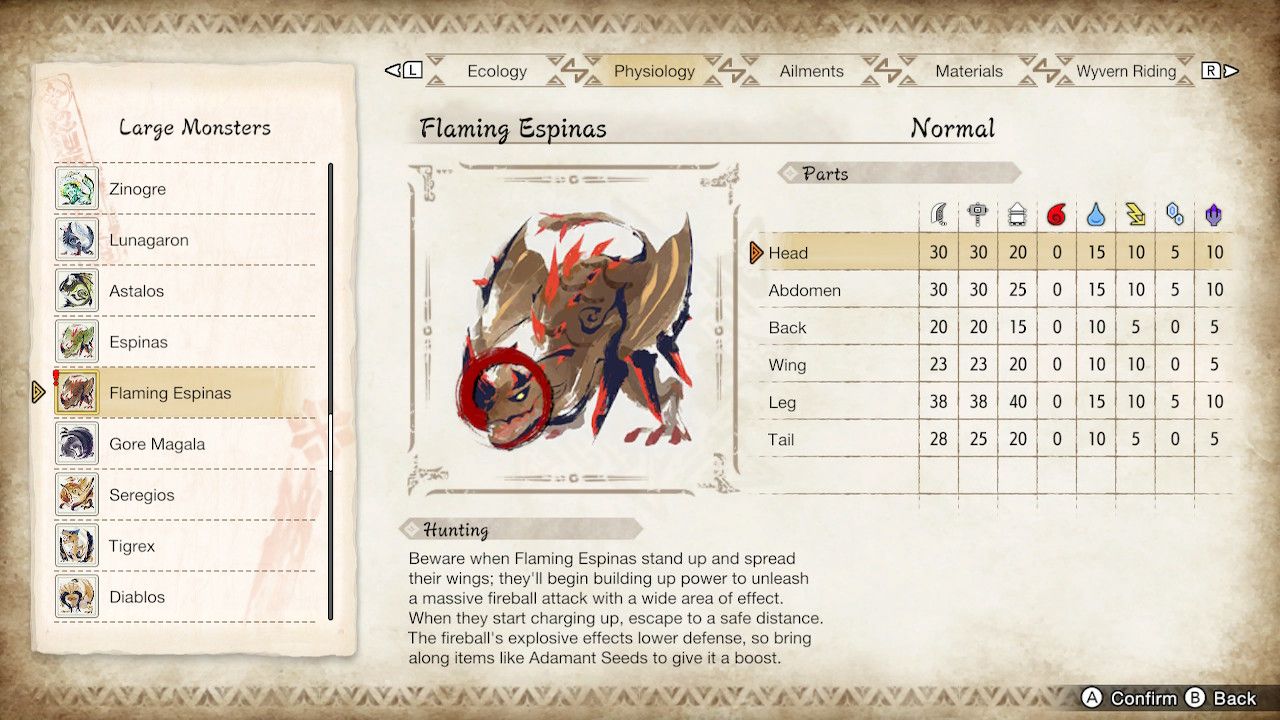 Flaming Espinas will be completely immune to Fire and Poison, something expected given his physiology and how much sense it makes to make it have an advantage over the normal version. Water will be your best option against it, with Thunder and Dragon following close, and Slashing weapons will deal the most damage as long as you aim for his legs and tail. Another weak point will be its head, but this is harder to hit because of its aggressive demeanor in battle.

Preparing yourself for this fight is paramount since its fire attacks are incredibly strong and can easily one-shot you. On the armor side, anything with high Fire Resistance will be beneficial, and both Pride (Seething Bazelgeuse) and Golden Lune (Golden Rathian) sets are some of the best set options for that. While Flaming Espinas won't inflict Paralysis or Poison, you still will need to be able to endure the Stun, so having Steadfast decorations will be always useful.

On The Weapon side and given this monster's weaknesses, you want to invest in either Water, Thunder, or Dragon-Type Slashing weapons (with an emphasis on the first element). Weapons like the Mud Shredders (Almudron's Dual Blades) are the best option, but Despot's Twindart (Zinogre's Insect Glaive) and L'Origine (Shagaru Magala's Greatsword) work as great alternatives as well. 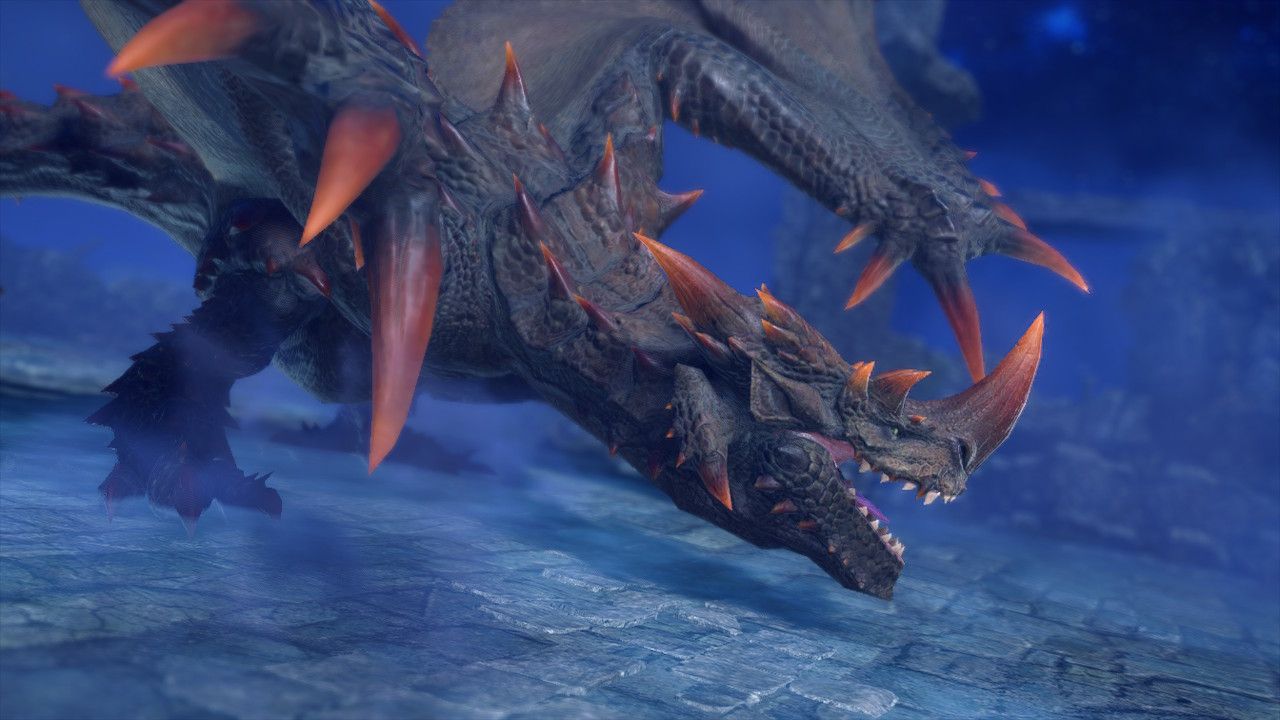 If you thought the base Espinas was an aggressive monster, think twice. This bad boy won't leave you alone at any point, using a lot of jumping movements that make it very hard to evade and sporting some of the strongest flaming attacks in the whole game. He will still use some maneuvers like the tackle-running and its classic fireballs, but its most difficult attack to witness is, by far, a massive AoE flaming explosion that will most likely wipe you out with no chance whatsoever of enduring it.

It is significantly important that you keep your mobility in check and do not come to this fight without the proper armor set or you will have a very bad time. Keep yourself positioned at its sides and never let it tackle you because two more tackles will follow up the first one, and you won't enjoy that. Try to hit it from the air or the sides as much as you can, and with the proper care and a sprinkle of luck, you will survive your first encounter with this monster. 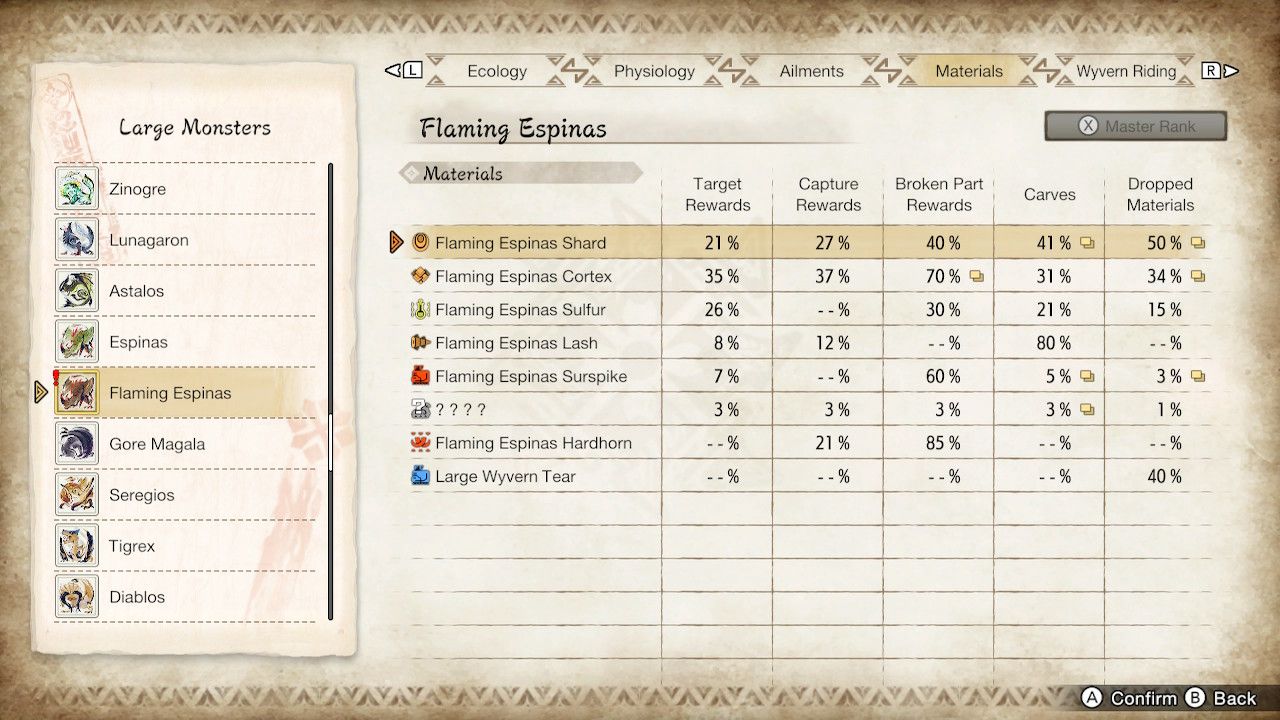 Flaming Espinas will drop the following items after having its parts broken or being defeated in battle: