Home » News » MechWarrior 5’s combat is on target, but other parts fall flat

MechWarrior 5’s combat is on target, but other parts fall flat

MechWarrior 5: Mercenaries takes a few hours to really get moving. For a game about building-sized robots pounding the hell out of each other with futuristic weaponry, that’s entirely too long. Add in some uninspired voice acting, character models that look strangely out of date, and a cringe-worthy opening CGI cutscene and it all adds up to a very bad first impression. But, after suffering through a buggy, pre-release version of the game I’m excited to start playing with the new day-one build. That’s because MechWarrior 5 makes shooting up other ‘Mechs a lot of fun.

MechWarrior 5 is the first single-player game of its kind in nearly 20 years. It puts you into the cockpit — or over the shoulder in third-person, if you prefer — of a 50-ton walking BattleMech. The action builds from there, adding in larger and faster units as well as up to three additional AI-controlled squadmates. The game also supports up to four players in multiplayer, but I haven’t had a chance to try that feature out yet.

Unfortunately, MechWarrior 5 doesn’t do a good job of showing you the ropes. The tutorial leaves out important bits of information and rushes by things like targeting enemies, which is key to launching long-range attacks. Targeting also helps you direct your AI-controlled companions. The game includes a system to give orders to your allies, but it skips over explaining what those orders cause the AI to do. 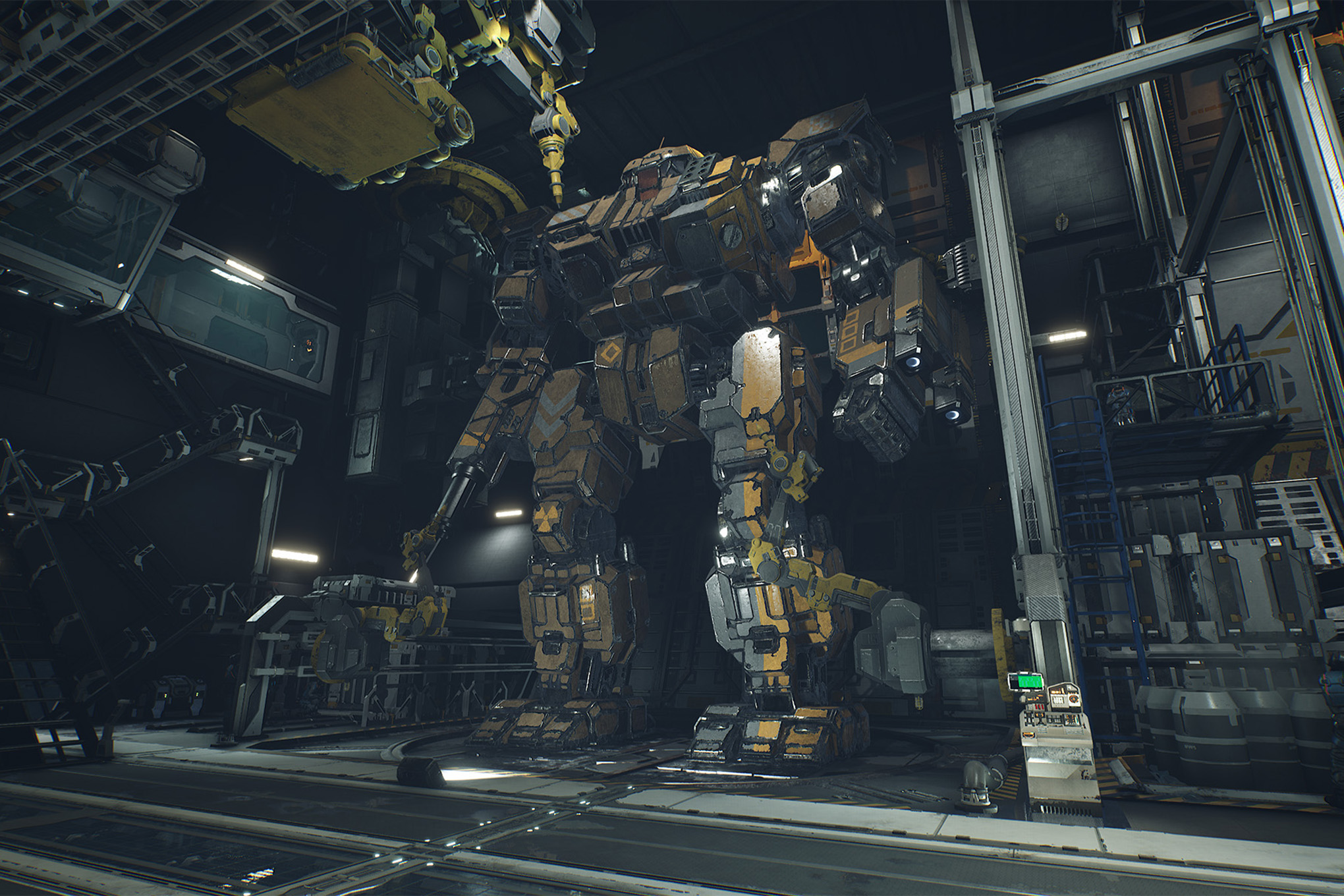 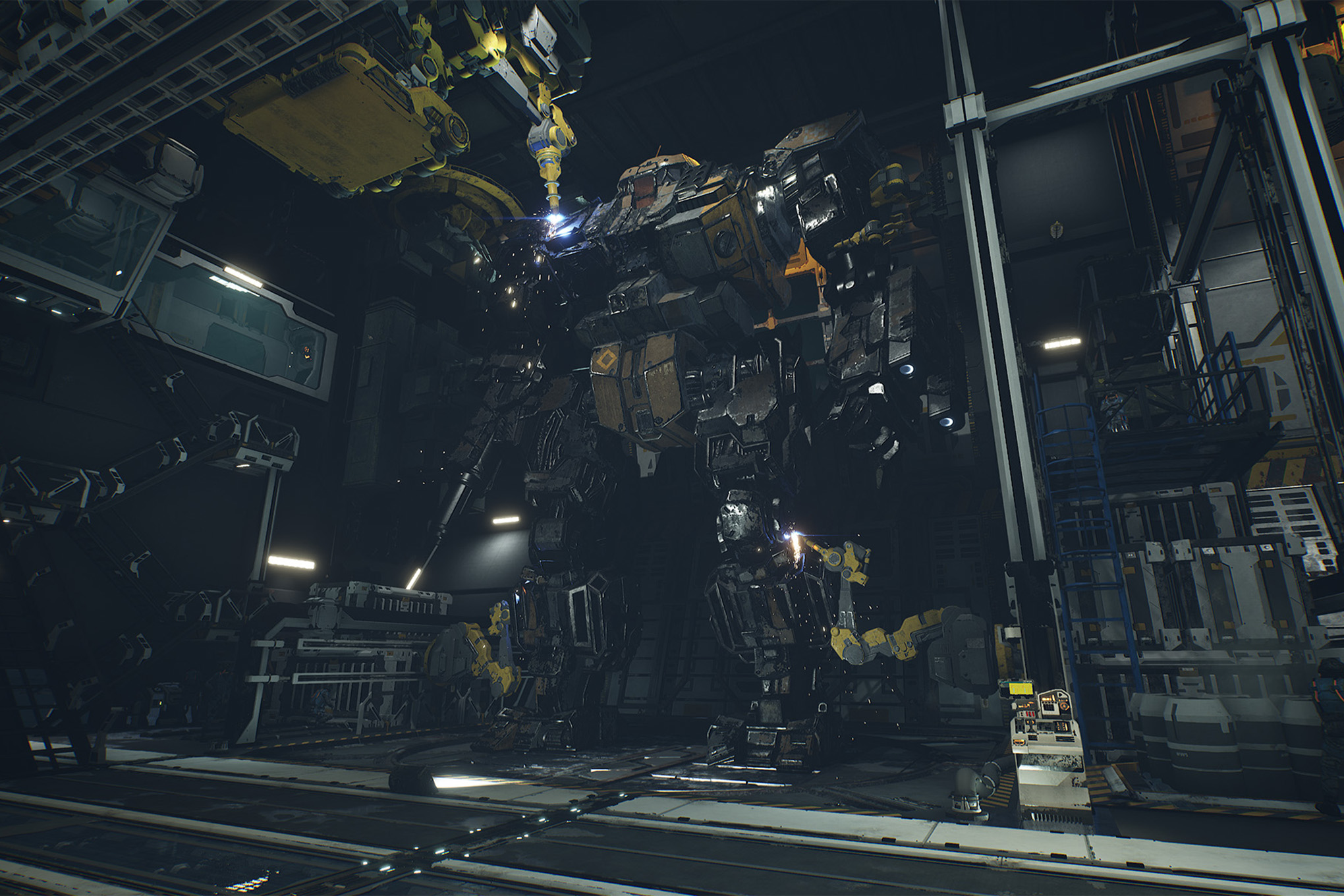 The most jarring part of the game is the writing. The script feels dated, with quips that were pulled from 1980s action movies. The voice acting is stiff, as are the models for non-player characters. Your engineer can’t even be troubled to shift from foot to foot as he stands stock-still, staring into the middle distance while he delivers his lines.

Below that awkward surface, however, is a deep combat simulation. Part of MechWarrior 5’s quirks is how it forces you to aim your guns. Weapons are mounted on hardpoints all over your ‘Mech’s body and arms. In front of you there’s only a single targeting reticle. So, while a laser embedded in your ‘Mech’s chest will tag whatever you’ve got in the crosshairs, an autocannon bolted to your right torso is going to impact the same target a little lower and to one side.

It makes getting the range right a bit tricky. As a result, it always feels like you’re shooting from the hip. Taking down aerial targets when they crop up can be a lot of fun, but hitting fast-moving tanks and armored cars on the ground is an act in frustration. Often explosive shells and laser beams will collide with terrain in the foreground or fall short due to the offset aiming on some weapons. Meanwhile, those little things never seem to miss. MechWarrior 5 is very much a skill-based game, and I can see myself needing to spend a lot more time in the cockpit before I feel truly comfortable.

The game’s second mission in particular is a low point. Alone, in an under-gunned and poorly-armored ‘Mech, I had to take on a whole battalion of tanks and aircraft by myself. Then I had to blast my way through a single, fast-moving enemy ‘Mech while it literally ran circles around me. I blew up a half-dozen times, once before I was barely half-way through the mission. Making matters worse, saving isn’t allowed during battles, so each time I was forced back to the beginning to start all over again. Chief engineer Fahad seems nice enough. He never moves, though, other than to track the player in a narrow arc right in front of his face.
Image: Piranha Games via Polygon

At the very least, playing the same mission over and over again gave me time to try out a few different control schemes. I played MechWarrior 5 with a mouse and keyboard at first, only to find it a little too awkward. Moving both the ‘Mech and the torso with the WASD section of the keyboard is a bit unintuitive, especially when it came to controlling the throttle.

The game really opened up for me once I got it running on a HOTAS. Support was only added in the final few days that I had access to a preview build of the game. I’m happy to report that MechWarrior 5 works well with the Saitek/Logitech X52, but I found myself more attracted to the Thrustmaster T.16000M Flight Control System. That set features a bonus paddle on the throttle, which essentially allows me to control the lower half of my ‘Mech with my left hand and the upper half with my right hand. Starting today, the team tells me that pedals are also supported.

The developers at Piranha Games have been working on issues of balance in the final weeks leading up to release, and it all still needs to get dialed in. I’ll be holding off on my final judgment until I’ve put a lot more time into the game. MechWarrior 5: Mercenaries is up for sale as of this morning for $49.99 via the Epic Games Store.