The Evelynn Viego deck is truly a force to be reckoned with in Legends of Runeterra. Its win conditions go even beyond its two potent champions, and it has cards that allow it to be flexible enough to win at any stage of the game. As such, it has the potential to go toe to toe with almost any type of deck.

If you’re looking to play the Evelynn Viego deck you should note that, while it doesn’t require a PhD to pilot, it isn’t as easy as a simple aggro deck to play. With the two core mechanics being focused around Evelyn and her Husks, and Viego and his Encroaching Mists, you’re in for a treat once you learn how to master using them both. 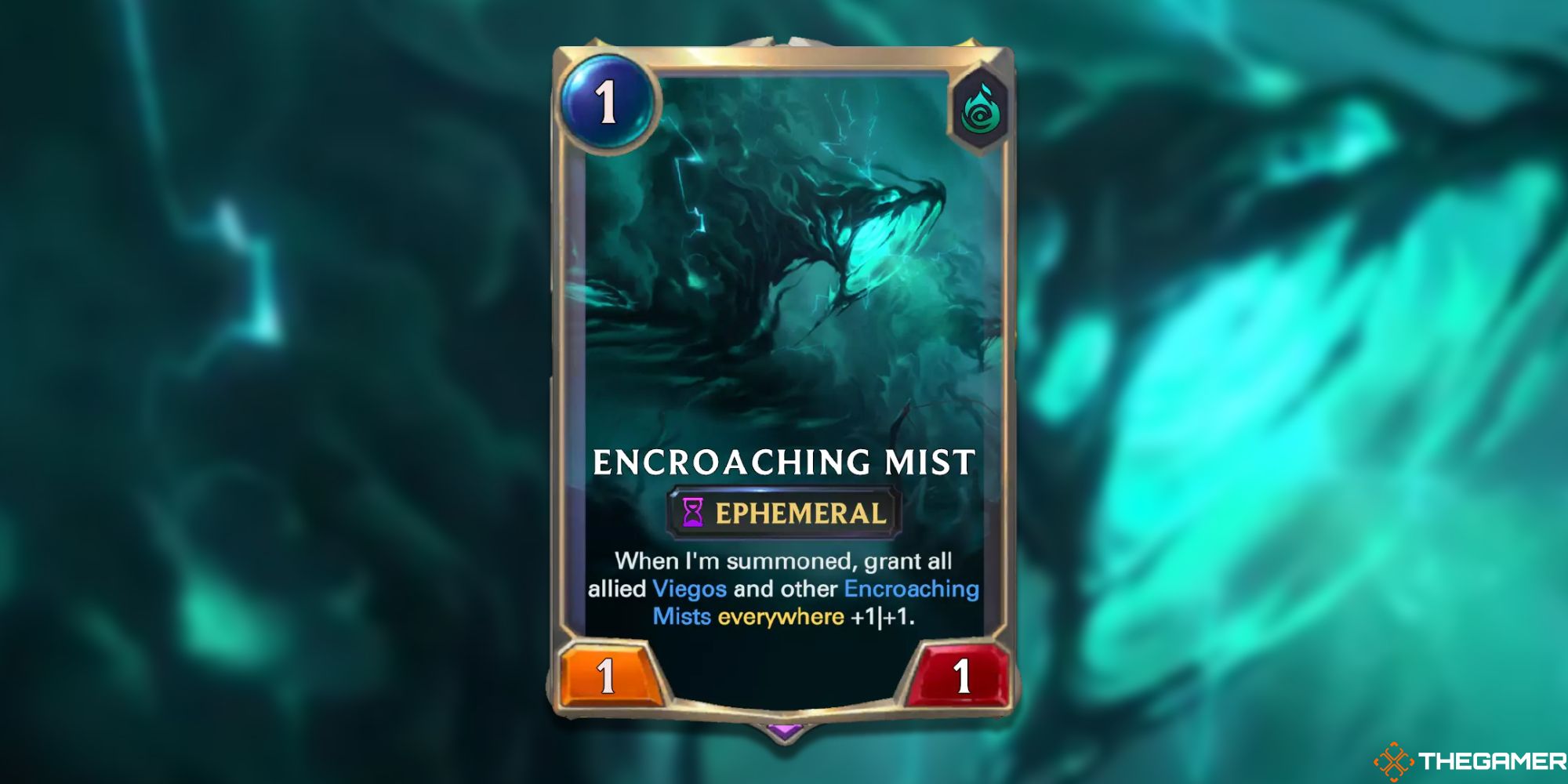 Considering the multitude of win conditions this deck has at its disposal, a good general strategy would be to pick one and cater to it the best you can. However, it’s not as simple as that, as you won’t know which is actually going to be your win condition until you see what type of deck you’re playing against and how your opponent responds to your moves.

To give a brief example, you’re up against a Kindred Nasus deck and you curve out well and play Evelynn on turn four. You got some more Husk-generating cards in your hand, and you’re ready to make Evelynn your win condition, but then they kill her with Vengeance.

That means two things: first, Evelynn can no longer be your win condition (unless you just draw another the next turn) and they used one of their hard-removal spells to kill her, paving the way for a different one of your heavy-hitters, perhaps Viego, who is also in your hand, to become your new win condition.

The point is, you’re never going to know how a game will turn out, so use your judgment as you play your possible win conditions. See how your opponent responds, and go from there. What this deck lacks in defensive spells it makes up for in game-winning threats, so it’s alright to sacrifice one win condition for another. 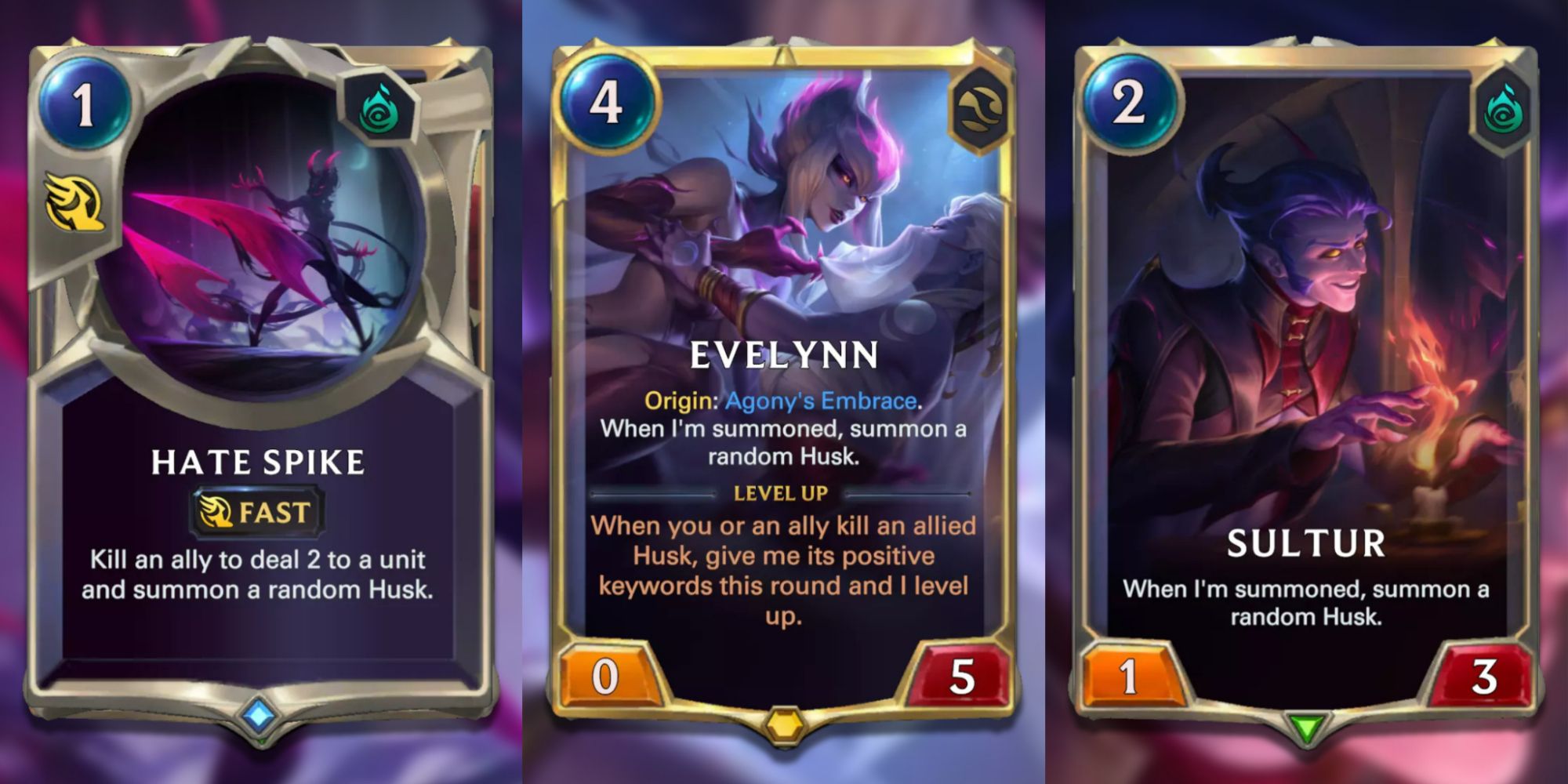 You’ll want to mulligan Hate Spike, Sultur, one of your three drops, and an Evelynn. Of course, your Mulligan varies depending on what type of deck you’re up against, but as a rule of thumb, these are the cards you want to aim for.

Another general mulligan to go for would simply be two spells, a low-costing minion, and Evelynn. So, perhaps, instead of grabbing Sultur or a three drop, you may want to pick up a vile feast or Black Spear instead.

In sum, it’s good to mulligan Evelynn, one to two low-costing spells, and one to two minions, preferably those that spawn Husks. 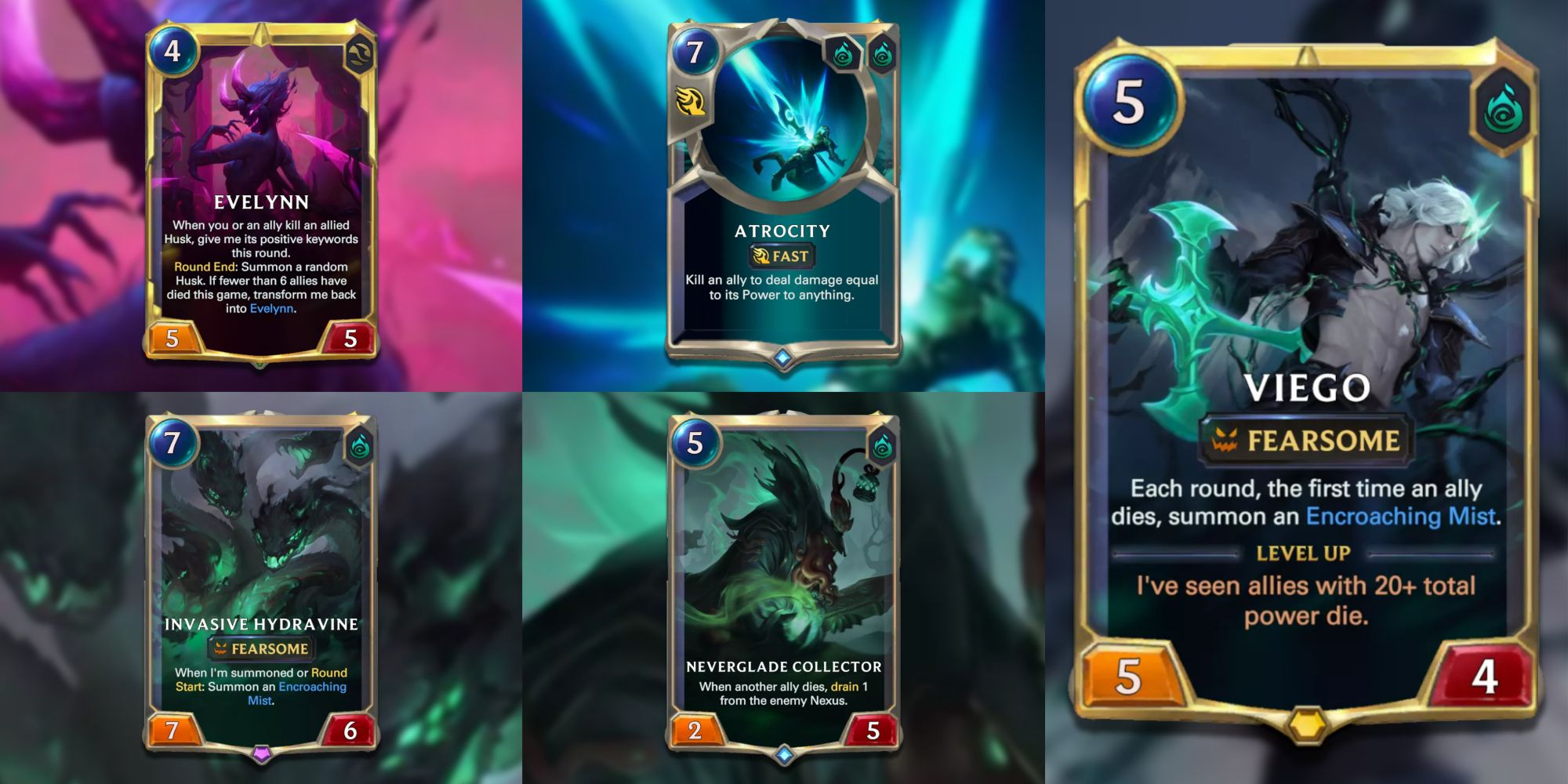 As previously mentioned, this deck has quite a few win conditions, so let’s look at each one more closely so you can better adapt to each of your games. 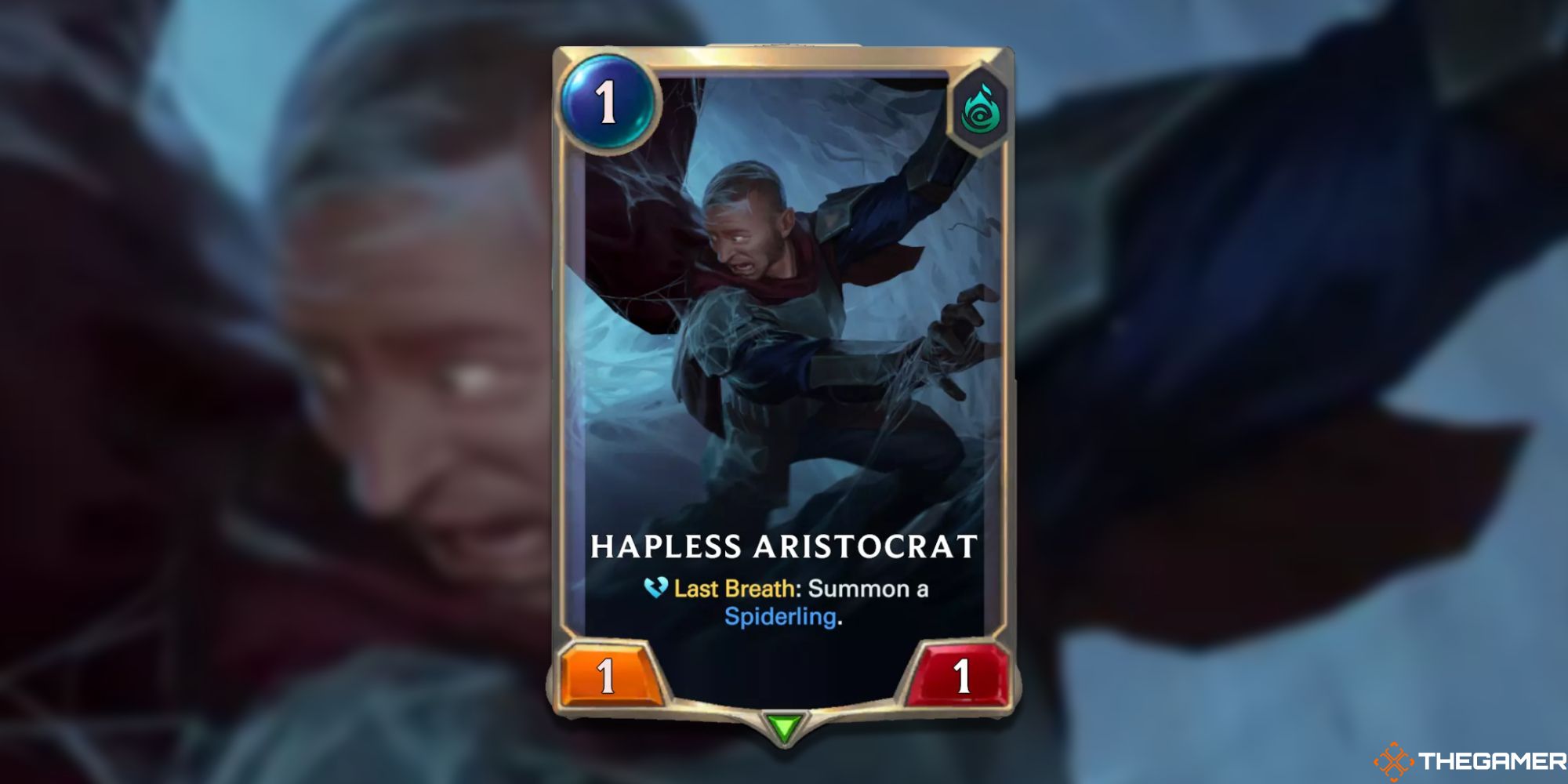 Playing against an aggro deck can be tough, but is certainly doable if you can afford to play reactively. You’re going to want to Mulligan as usual and find two or three low-costing minions, especially your Hapless Aristocrat (finding Evelynn is less important), and a Hate Spike or Vile Feast (or both).

In terms of playing reactively, this is hard to do if you’re under immense pressure. However, if you can afford to do so, there’s nothing better than killing the target of their Noxian Fervor with a Hate Spike or Black Spear. Other than that, remember to trade as effectively as possible. 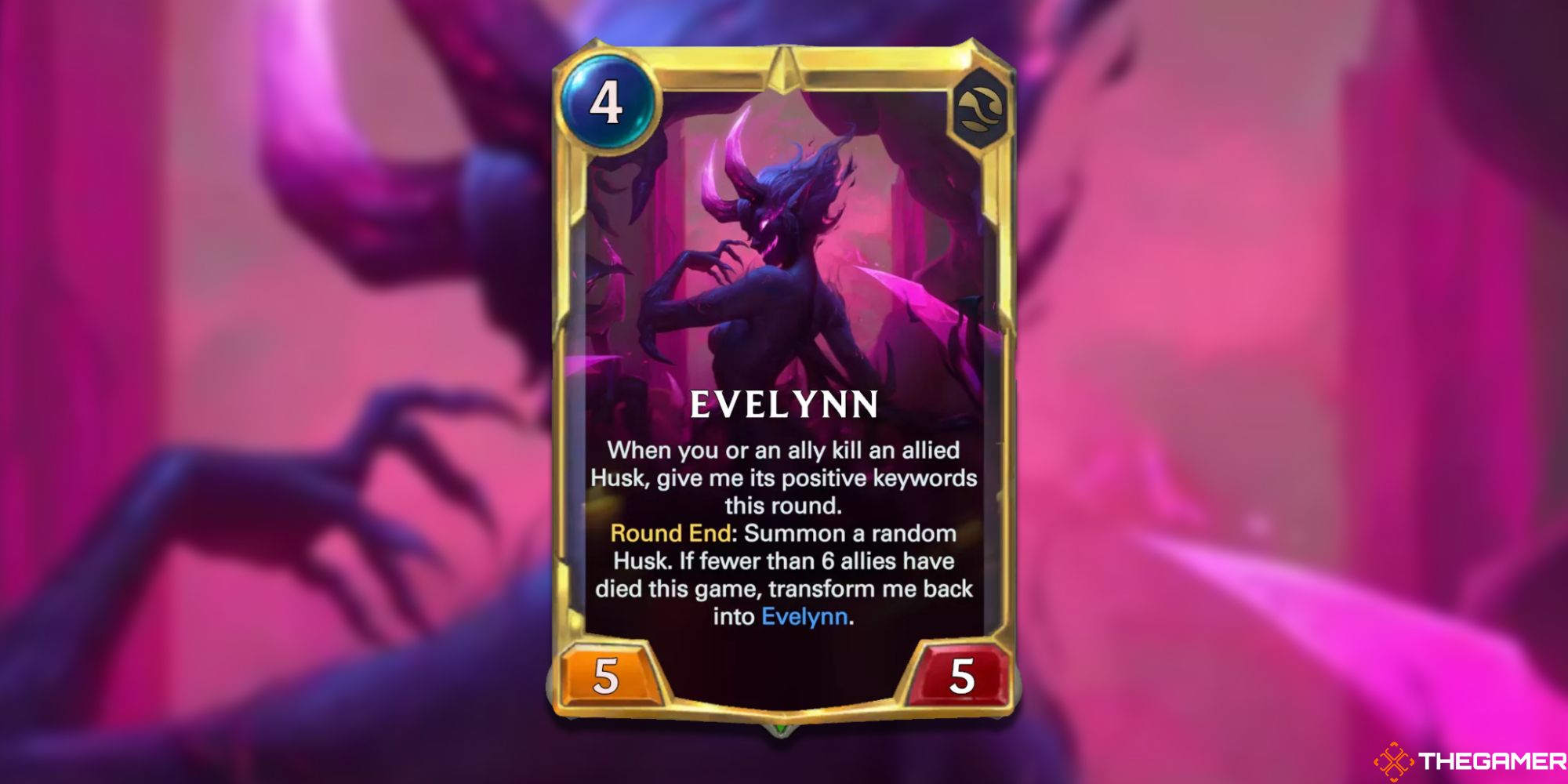 Against mid-range decks, you definitely want to mulligan an Evelynn (along with the usual low-costing followers and spells), as she is your ticket to sustain through their early to mid-game onslaught. Mid-range decks are all about tempo, so the goal here is simply to out-value them so that you gain tempo, and they lose tempo.

The way to do this is by taking good trades; many mid-range decks don’t have the same early power as aggro decks, allowing you to strategically take some small hits in order to gain value in later turns. Another thing to keep track of is good Husk bonuses, as you’ll want them on any of your win conditions. 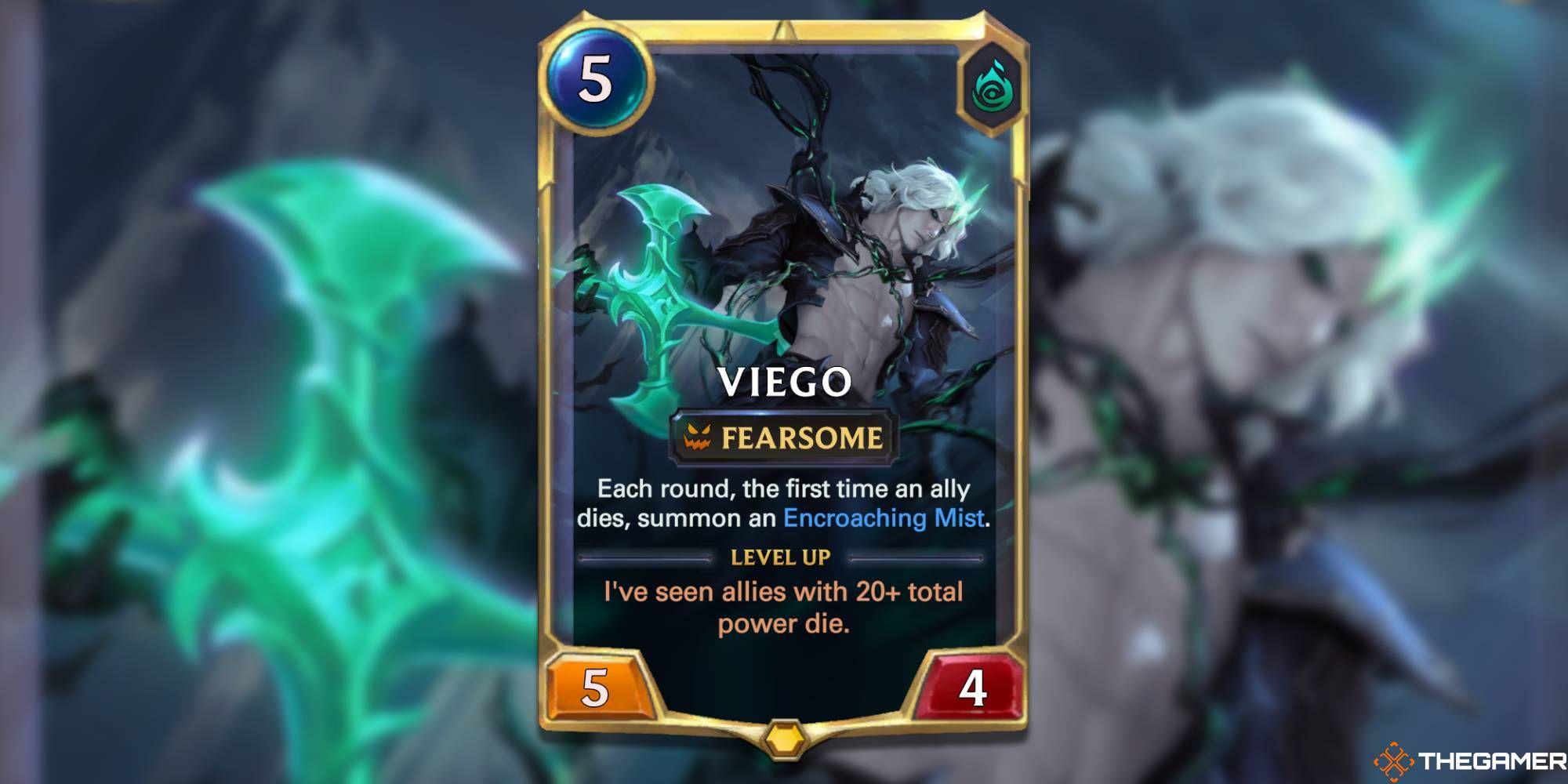 Thus, Viego and Atrocity are your most reliable tickets toward beating a control deck, so if you know you’re up against one, be sure to play him when it’s safe. Try and wait out your opponent's hard removal, or if you have two Viegos in your hand, bait out the hard removal with one and then play another.

While Ionian control decks will have Deny for your Atrocity, they usually don’t have hard removal for Viego, unless they’re also running Shadow Isles. If the former is the case, the only way they can deal with Viego is by Recalling him, so don’t worry too much about that as you can just play him again after he’s Recalled with all the same stats. 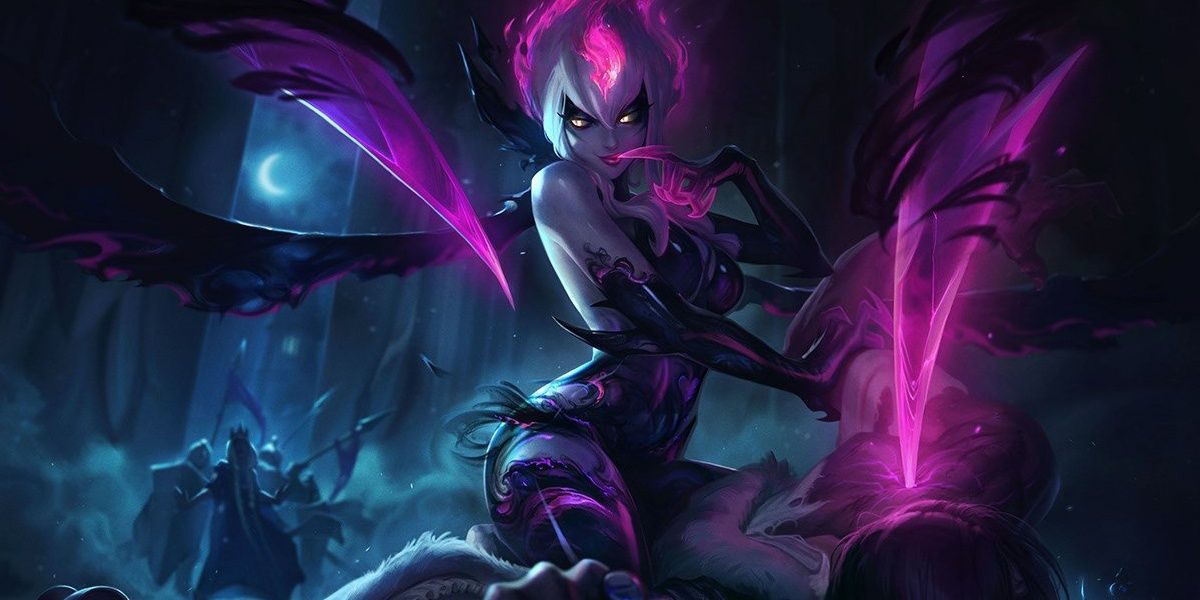