Henry Cavill is right — in 2019, Total War: Warhammer is great

Creative Assembly’s Total War: Warhammer franchise has seemed to be quiet recently (apart from a shout-out from Witcher star Henry Cavill). IIts last new faction expansion, which is arguably the most newsworthy postrelease addition for a strategy game, was over a year ago. But a year of quieter additions, such as new playable lords for existing factions and major patches, has actually shifted the entire focus of how Total Warhammer works — in significantly better ways.

The net effect of the changes is this: the Mortal Empires mega-campaign that combines both games and every faction in the series is no longer a frustrating curiosity, but instead, it’s the best way to play Total Warhammer.

Putting the pieces together

How this happened is a bit complicated, because Total Warhammer is a complicated set of games. The first full entry in the series has a campaign that was kind of the story of the world: various factions fight each other until Chaos invades, defeat (or join) the Chaos invasion, and then control the world that’s leftover. The second game in the series has a more specific, slightly smaller-scale campaign, with an entirely different set of factions on a different map.

The promise of the series, however, was a full combination of all these (and a potential third installment) was that they’d all fit together into one super-campaign, with the entire map and set of factions of the Warhammer Fantasy world all in one place. That came out as a free expansion a few months after Total Warhammer 2’s release, called Mortal Empires, which was largely the addition of the TW2 factions to the first Total Warhammer’s campaign structure.

See, Mortal Empires has largely been a mess since its release. It’s been a curiosity that I’ve wanted to like as much as I’ve liked the main games, but always missing something. (It also created major technical headaches for Creative Assembly, and it took it months to add the final faction from the first Total Warhammer, Norsca, as functional in Mortal Empires.)

The two biggest problems were that the Chaos invasions, the centerpiece of the fantastic campaign of the first Total Warhammer, were basically nonfunctional, either focusing entire on the player to the point of absurdity, or barely being noticeable. The latter problem is still present, but it’s not a deal-breaker on its own.

The second major issue was that with its huge map and well over a hundred different factions, Mortal Empires was just slow as hell. Early in the game, you’d spend 15 seconds moving an army, press end turn, and then wait for 2-3 minutes, with different waits in the late game. The patch attached to the recent release of The Shadow & The Blade add-on, however, adds a massive technical improvement, making the game infinitely more playable.

I’m not sure I’ve ever seen a game that needed this kind of optimization so much receive it so successfully, except perhaps Crusader Kings’ famous castration bug. We should commend Creative Assembly for their commitment to improving a years-old game in ways that didn’t seem possible.

Filling in the map

The last major improvement, and the one that justifies Creative Assembly’s more subtle expansion release this year, is that the releases of legendary lords for existing factions allows them to diversify the map. For example, when I played early this year as the Lizardman faction Hexoatl, I was swiftly able to dominate Lustria, the continent I was on. But the summer release of “The Hunter and the Beast” added Markus Wulfhart, an Empire legendary lord, to that continent, enabling for both different factions to run into one another early in a campaign, and also more of a challenge on that continent. 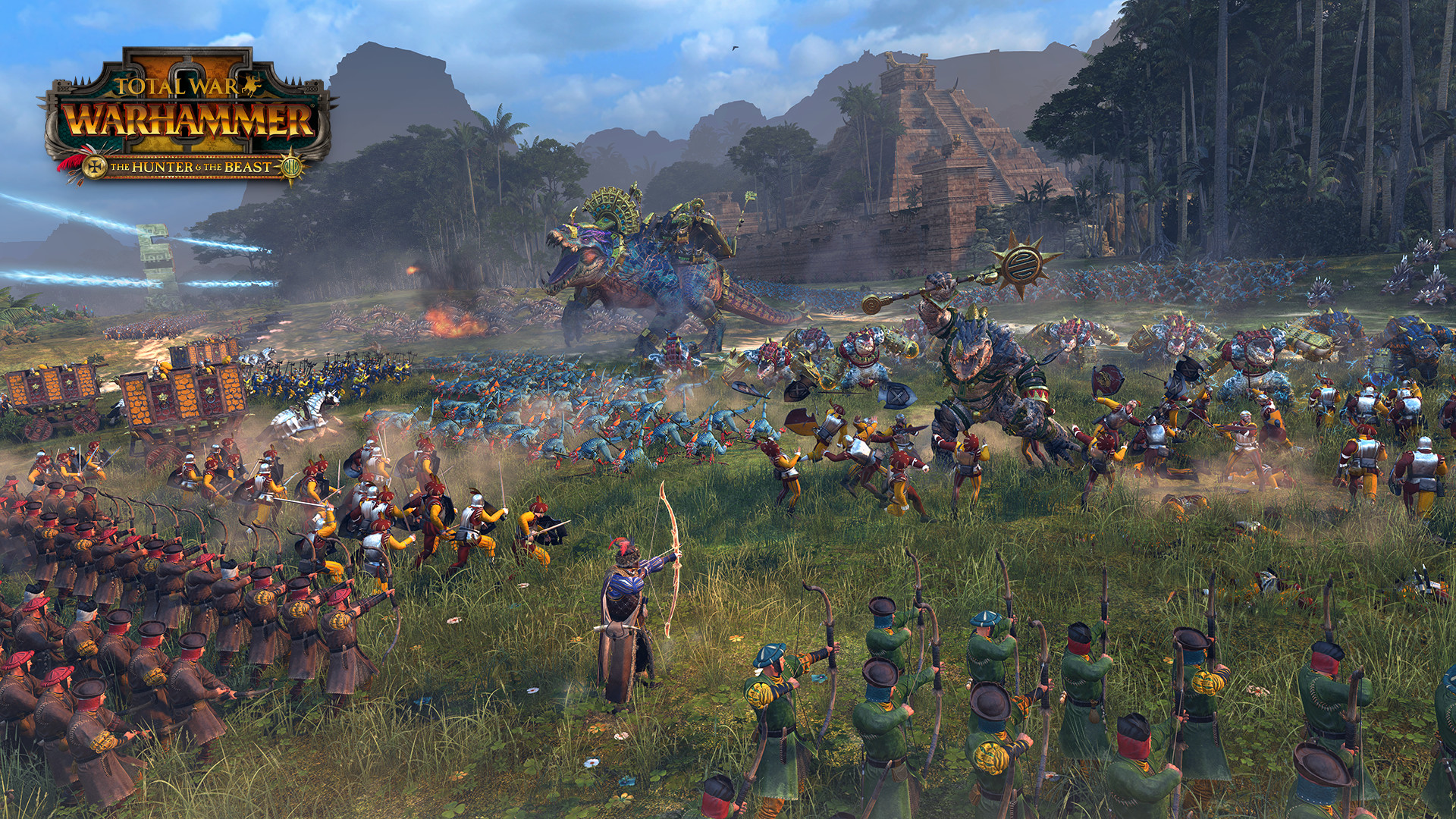 Above: Total Warhammer’s expansions have put Lizardmen and Empire in conflict

These little touches have been added across the board. In addition to “The Shadow and The Blade” adding a new Skaven and Dark Elf faction on the far southeast section of the campaign map, a new Bretonnian faction has been added in the southern desert, in the midst of the Lizardmen and Tomb Kings there. I live in hope of playable Dwarfs or Greenskins showing up in Naggaroth, but even without that yet, it seems like every part of Moral Empires campaign has been given a fun new dash of difference both aesthetically and strategically.

It’s hard to see, with the few remaining factions and sections of the map available to Creative Assembly, how exactly they’ll manage to make a third installment in the series. But their success at making Total War: Warhammer a living, improving game means that for me, as much as I’d like to see Chaos Dwarfs, this feels like a full, completed game, a fulfillment of the promise made at the start of the franchise.