Healium is a platform that uses virtual reality, augmented reality, and wearables like the Apple Watch to reduce anxiety. And in peer-reviewed studies, it has been shown to reduce moderate anxiety and increase feelings of positivity quickly.

It’s the brainchild of Sarah Hill, CEO and chief storyteller for StoryUp Studios, a Columbia, Missouri-based startup that aims to heal people with Healium. The company raised $1.3 million in funding, and Sean Rad, founder of Tinder, joined the company’s advisory board.

Hill was a television news reporter for more than 20 years, accustomed to seeing dead bodies, covering conflict and natural disasters such as the tsunami in Sri Lanka in 2004, and listening to police scanners for hours at a time. But in 2009, she lost it.

She thought she was having a stroke and her husband drove her to the hospital, but the doctors could find nothing wrong. After several more trips, Hill had to confront the notion that she was having panic attacks, driven by anxiety. Anxiety is no small matter, as the World Health Organization officially recognized burnout as a medical condition. Healium helps you manage anxiety.

“It allows you to control them with thinking or lowering your heart rate,” Hill said. “If you lower your heart rate, you get an environmental response. So instead of just watching this media, you’re actually feeling it and you know, have a sense of control over your environment. It gives users sensation that their thoughts have the power to control things not only in the virtual world, but in the real world as well. It’s a metaphor that you do have control over your world, not just inside these goggles but in the real world as well.”

“After decades of me choosing to consume information high in negative fiber, it took a couple of trips to the hospital to understand my media diet was, in fact, making me sick,” she wrote in a post on Medium. She saw a psychologist, Jeff Tarrant, who used neurofeedback brainwave stimulation to treat her so she could calm herself and regain the ability to sleep. She told herself stories to help her “cool her jets” and rest.

That became the foundation of Healium. In 2013, Hill exited the news business and began work on using virtual reality at a nonprofit called Veterans United. 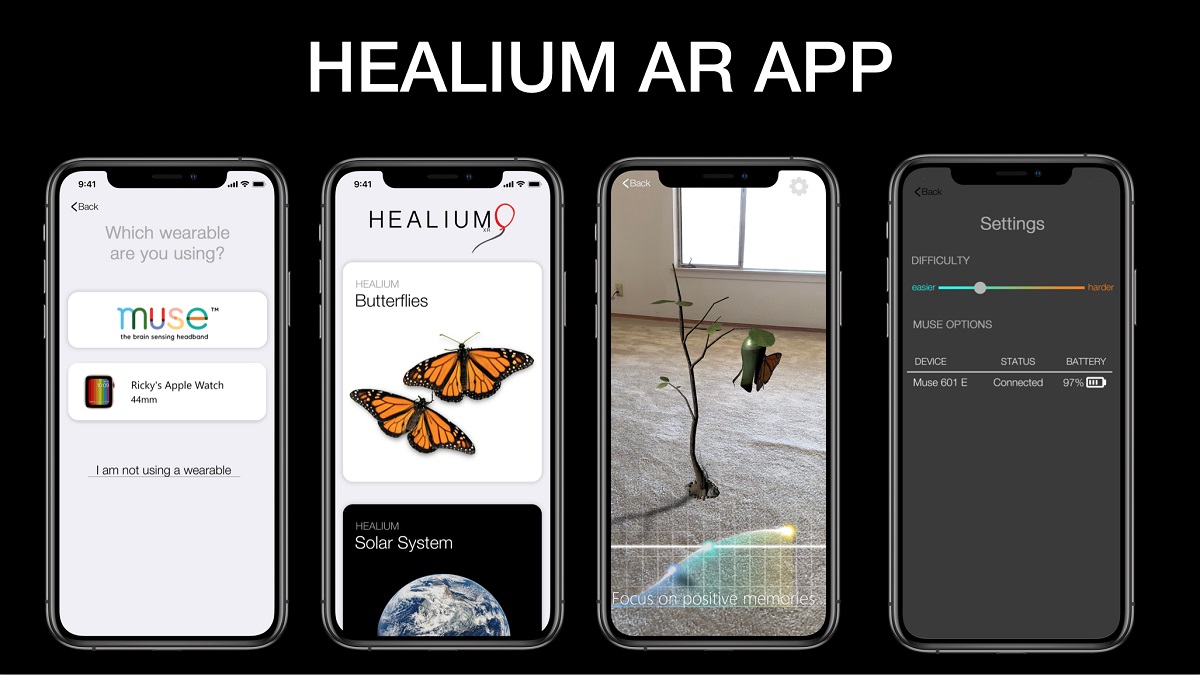 “We developed a program called Honor Everywhere that used AR and VR to do virtual tours of Veterans memorials in Washington, D.C. for terminally ill or aging veterans unable to physically travel,” Hill wrote. “After thousands of VR tours and other demonstrations, we noticed the immersive stories we created appeared to be affecting users’ physiology. The user would raise their hands beyond what their caregivers thought possible. I would watch as their breathing slowed. Repeatedly, they appeared to relax while wearing the goggles.”

At StoryUp Studios, she combined VR with neural stimulation to help calm people suffering from anxiety. She teamed up with Tarrant (chief science officer at StoryUp) to come up with immersive stories, neuromeditation, and calming imagery to help people relax. They started their company in 2015.

“You can essentially power these experiences with your biometric data. It started from my own struggles with anxiety and panic attacks as a reporter,” Hill said in an interview with VentureBeat. “As you know very well, you have to cover things that are horrific. People who have lost children. We covered the aftermath of the tsunami and I did not take care of myself. I didn’t have a self-care tool. So we created Healium.” 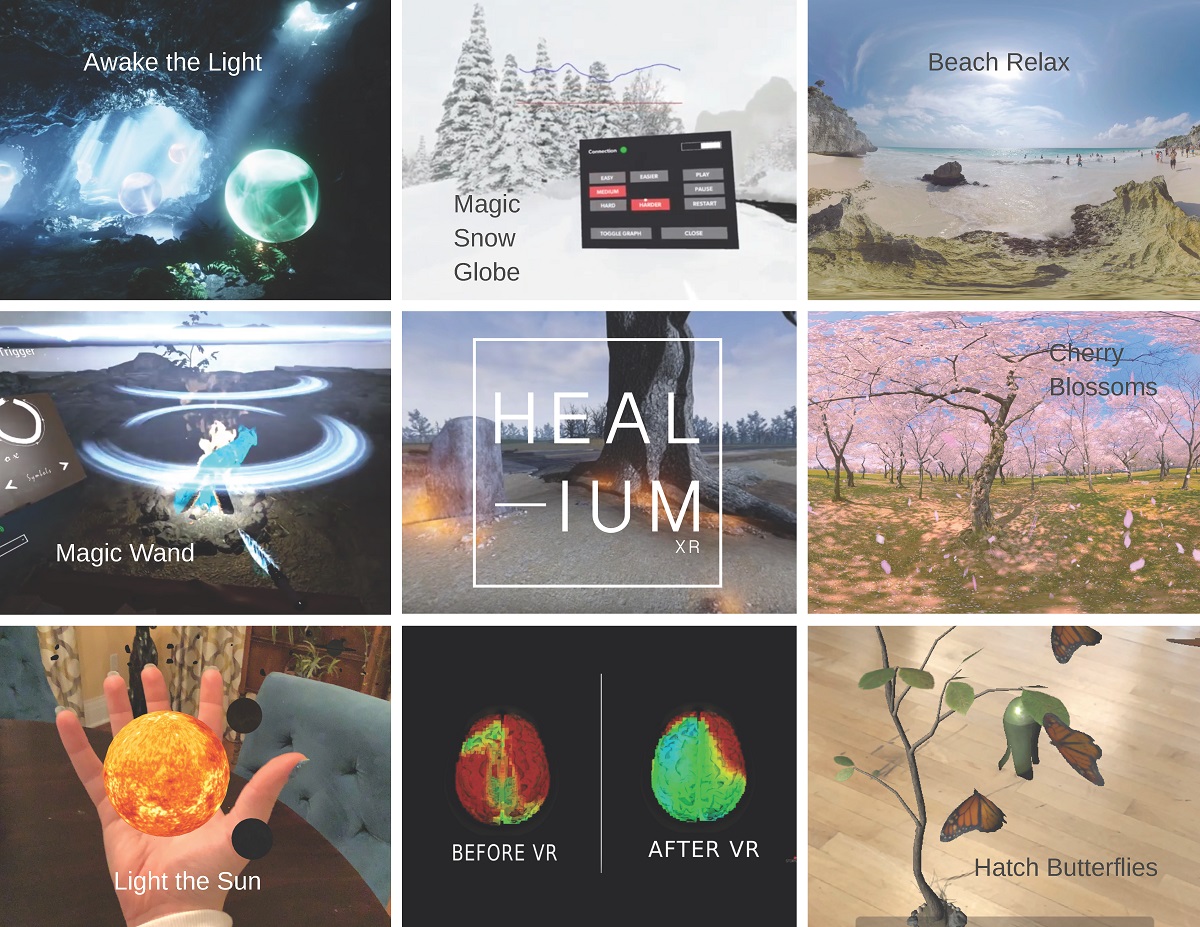 Above: Healium uses imagery to help you relax.

They started with VR and then expanded to augmented reality on a smartphone, and then combined it with the Apple Watch. I’ve used the Healium app for the Apple Watch to control my breathing. You tap the Healium XR logo on the watch to begin a session. You point your iPhone camera at a flat service and start. You can choose images of butterflies or the solar system. I chose butterflies.

Soothing music begins. You see a small plant with some branches and a few leaves. It has a chrysalis hanging from it. On the bottom, a chart shows your heart rate in real-time. You try to relax so the heart rate stays low and below the line. To do that, I had to take deep breaths, stay still, and clear my thoughts. It worked fine, and my heart rate fell. A butterfly emerged from the chrysalis and flew around.

“Healium is a drugless solution to become more self-aware of your emotions. Because you have the ability to see and control these virtual worlds via your electricity, if you will, that comes from the wearables from your forehead or from your wrist via an Apple Watch.”

In the VR version, you can see scenic images that are peaceful. It’s sort of like the opposite of closing your eyes to meditate. Healium uses eyes-open treatment with imagery that is meant to convince you that you are safe and OK.

“There’s a brain pattern associated with feelings of positivity, called gamma asymmetry,” Hill said. “If you’re this particular brain pattern is being emitted from your forehead, then butterflies will hatch out of this augmented reality chrysalis. And they’re all easy to remember stories. meant to be simple so that you can then recall that story about having the butterflies when you get in a stressful situation.” 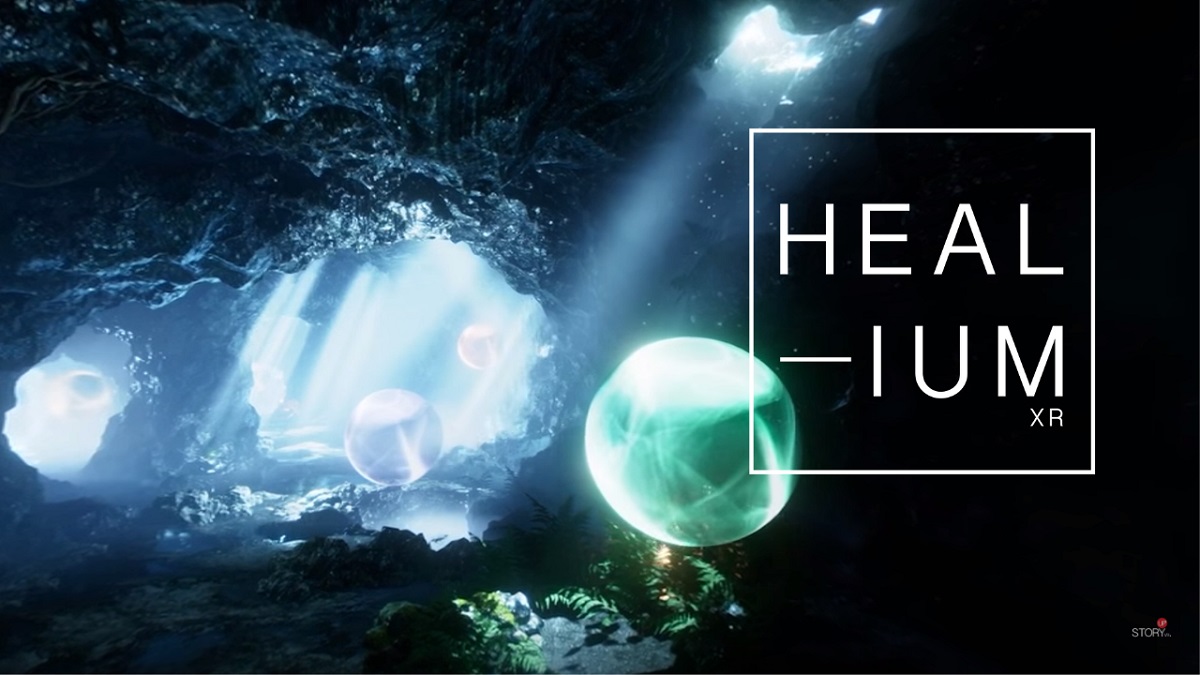 Above: Healium lets you see things that make you relax.

Hill said that Healium has been shown (in studies here, here, and here) to reduce moderate anxiety by a third and increase feelings of positivity quickly, in as little as four minutes. Healium is unique because it’s a drugless, digital solution for the self-management of anxiety. It also harnesses the power of the body’s natural electricity to “heal” or change virtual worlds.

These biometrically driven stories are powered by your own brain patterns and heart rate via a smartwatch or brain-sensing headband. If the user’s feelings of the open heart or quiet mind are meeting a threshold, the virtual environment responds to your biometrics in a beautiful way. Hill is a storyteller, and she refers to Healium as a storytelling medium. That’s because the brain can remember stories better than almost anything else. One mother said she used Healium to stop her daughter’s panic attack.

Built with ARKit and ARCore and the Unreal Engine, Healium is a subscription app that costs $5 a month, and it is available on iOS and Android, and it is also available on the Oculus Store in VR. It helps to use a wearable, but it’s not required.

Hill said the company has generated more than $800,000 in revenue over its history. The app has been used by the U.S. Navy, where sailors sometimes don’t see nature for months. The company has a number of issued and pending patents. And as for her own mental health, Hill said she is fine.

“That was years ago. I’m fine now. I don’t have any problems at all and am not on any medication,” Hill said.