See where your favorite duos landed on the leaderboard as we look back at day two of the Winter Royale.

Day two of the Winter Royale 2019 provided a much friendlier scoring system than the all-or-nothing system from day one. In general, players were more accepting of a format that relied more on strategic placement points instead of just eliminations and victories. Similar to day one, we saw many duos cross into different regions, and some found surprising success. The cross-regional play turned out to be one of the more exciting aspects of this event. Many duos defended their home regions successfully and earned some cash in the process. With one day remaining, let’s see how day two played out across all competitive areas. 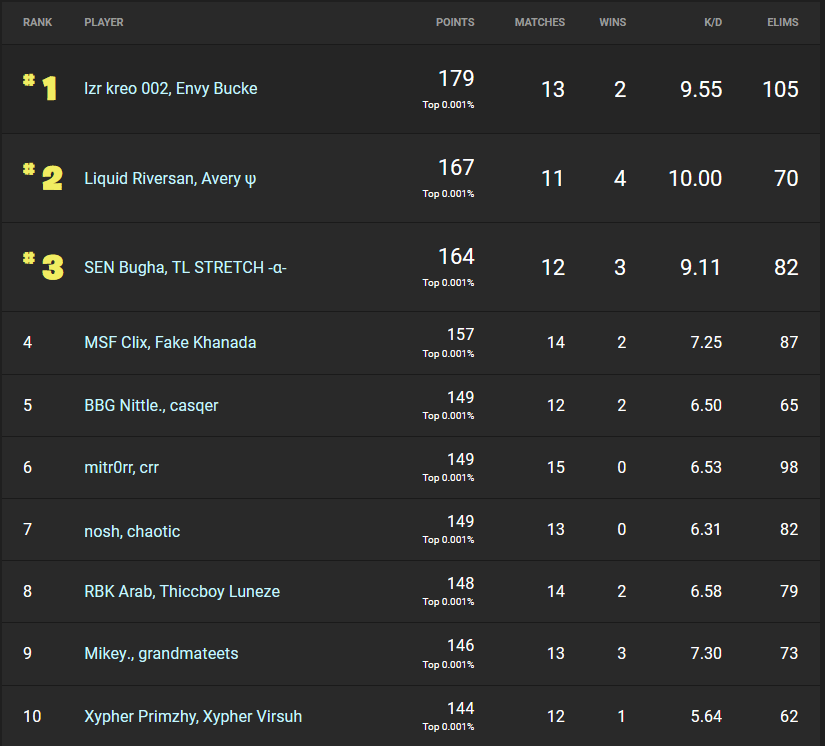 LZR Kreo and Envy Bucke achieved first place for the NA East day two Winter Royale. These two had been popping up on leaderboards across multiple regions on day one. After having played only 13 of their 15 matches, Bucke and Kreo earned two Victory Royales and a massive 105 eliminations. Day two’s scoring format suited them nicely as they averaged 16.62 for their placement per match. Both players added $4K USD to their winnings.

Coming in second was the duo of Liquid Riversan and Avery, who also made appearances on multiple leaderboards on day one. Riversan and Avery completed just 11 matches and won four of them. Solos Fortnite World Cup Champion, SEN Bugha, and his duo partner TL Stretch finished in third place. This placement adds yet another outstanding result to Bugha’s growing resumè in competitive Fortnite.

Mitr0 and Crr journeyed out of the EU region to encounter high pings and still finished top-ten. Unfavorable conditions did not stop them from taking some of the NA East prize pool. The highly skilled pair of Khanada and Clix also finished top-ten, further validating them as a legitimate duo. 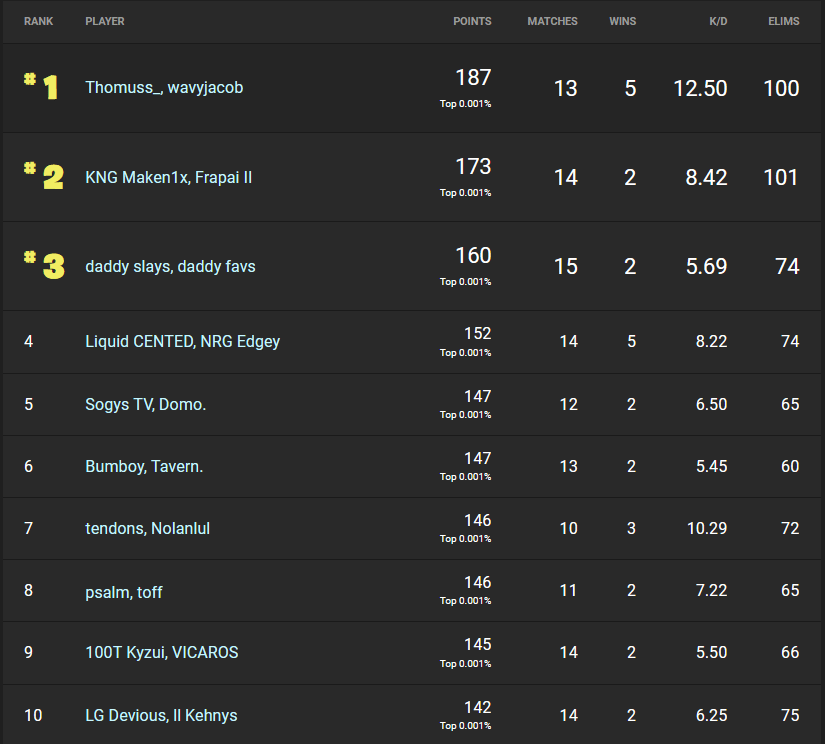 History repeated itself yet again as Thomuss and wavyjacob dominated the NA West region for the second consecutive day. Their 199-point performance from day one was just the beginning. These two produced an equally impressive 187 points on day two with 5 Victory Royales and 100 eliminations. At this point, it’s safe to say wavyjacob and Thomuss are the duo to beat in NA West. They each pocketed $3K USD for their efforts. It’s been a historic run for wavyjacob and Thomuss with still one day remaining.

The multi-regional duo of KNG Maken1x and Frapai took second in their home region of NA West. With 173 points over 14 matches, they came closest to dethroning the dominant duo of wavyjacob and Thomuss. They even managed more eliminations than the first-place teams, so perhaps day three is their day. Daddy slays and daddy favs finished in third place after winning the Asia region on day one. We can expect some more fireworks out of favs and slays on day three.

As usual, Liquid Cented and NRG Edgey appeared in the top-ten for the second straight day. It’s also worth noting that the NA West Chapter 2 Season 1 FNCS winners of Sogys TV, Domo, 100T Kyzui and VICAROS all finish top-ten with their respective partners. 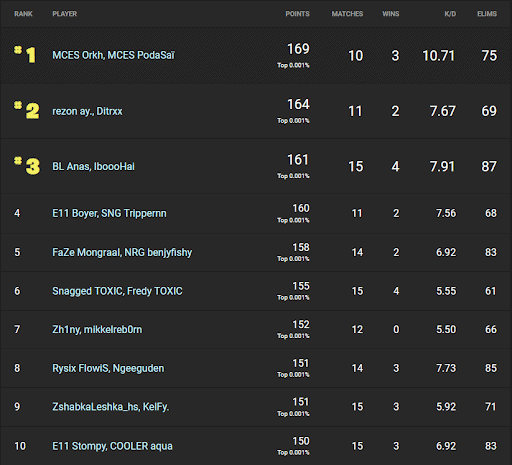 MCES Orkh and MCES PodaSai upset the big dogs out of the EU region and took first place on day two. They managed only 10 out of 15 games and made them count. Their three Victory Royales, 75 eliminations and average placement of 6.3 are one of the more complete performances that you’ll see out of a duo. A total of169 points were the winning number for Orkh and PodaSai, who embraced the scoring system that relied heavily on placement points. They each walked away with $4.5K USD.

Ditrxx and rezon ay came in second place with five fewer points than first. Their 11 matches produced two victories and 69 eliminations. Rounding the top-three is BL Anass and IboooHai, who had 161 points over 15 games. FaZe Mongraal and NRG benjyfishy achieved their first notable placement of the weekend with a fourth-place finish. E11 Stompy and COOLER aqua also made an appearance inside the top-ten. 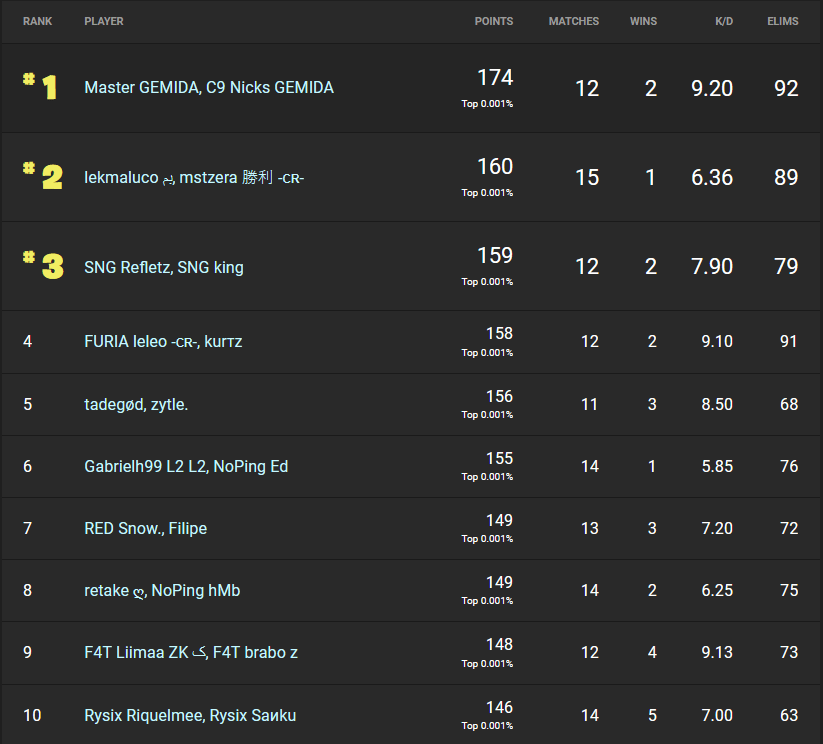 The highly recognizable duo of C9 Nicks and MASTER completed a dominant win in the Brazil region on day two. Over 12 matches, they reached 174 points, including two wins and 92 eliminations. This was a solid bounce-back spot for Nicks and MASTER after finishing in 17th place yesterday. Mstzera and lekmaluco managed 160 points and second place. Another notable duo of SNG Refletz and SNG king took third with 159 points. 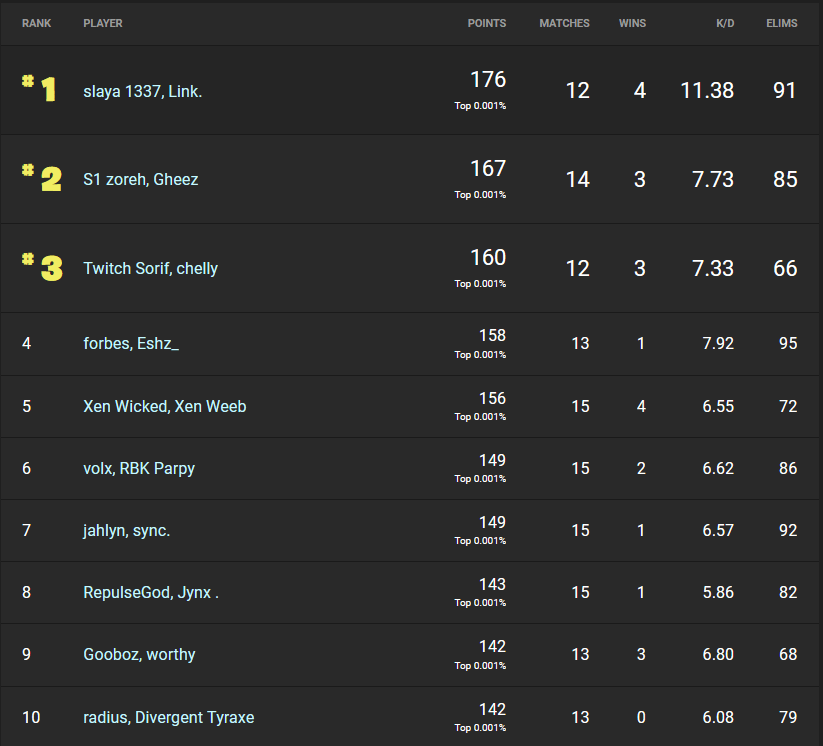 Link and slaya 1337 took first place in the OCE Winter Royale with 176 points. Their 12 matches played yielded 91 eliminations and four Victory Royales. Link and slaya managed an impressive 11.38 eliminations per death which elevated them above their OCE opponents. Each of their Victory Royales included double-digit eliminations. The duo of S1 zoreh and Gheez along with Twitch Sorif and chelly rounded out the top three in this region. Newly signed RBK Parpy and volx finished in sixth place. 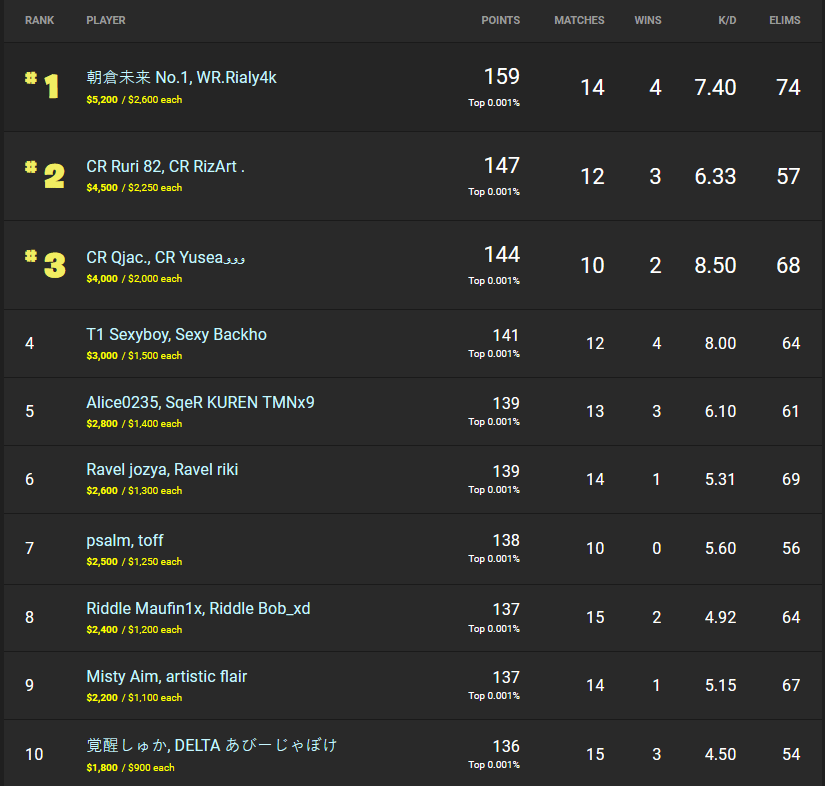 No. 1 and WR.Rialy4k put up 159 points en route to victory on day two. Their 74 collective eliminations bested all but one team in the top-100. Although their average placement was only decent, No. 1 and Raly4k earned four victories, which ultimately got the job done. The highly recognizable Asian duo of CR Ruri and CR Rizart managed 147 points and finished in second place. They completed 12 matches and won three of them. An NA West duo comprised of Solo Fortnite World Cup runner-up, psalm, and toff took seventh on sizable high ping. 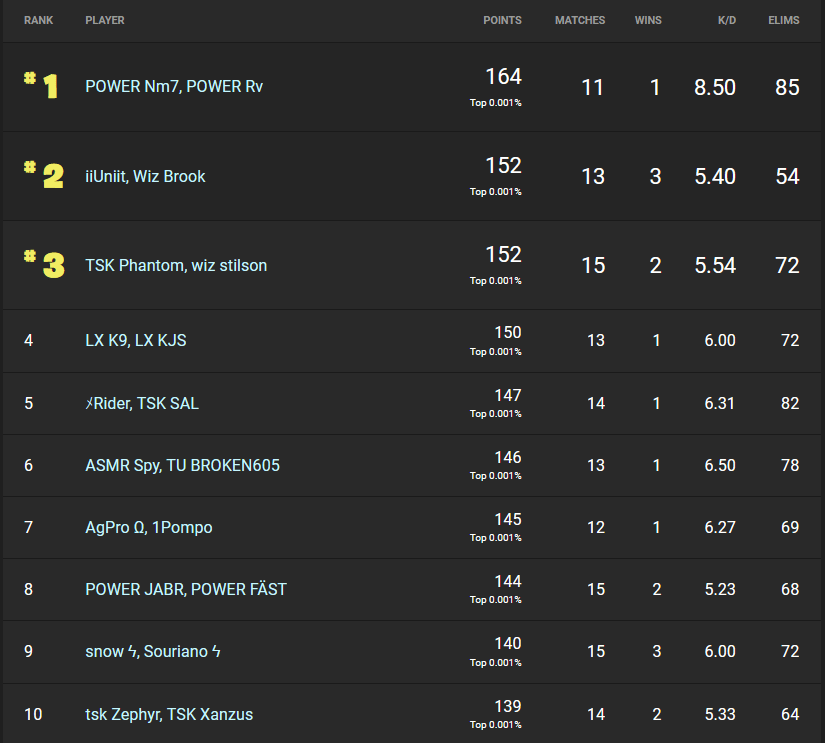 POWER Nm7 and POWER Rv took first place on day two of the Winter Royale. Their 164 point display granted them victory by 12 points over second place. They completed only 11 of their 15 possible matches with one Victory Royale and 85 eliminations. The POWER organization is typically represented well atop Middle East leaderboard. It’s not particularly surprising to see Nm7 and Rv in the number one spot. They earned $2.6K each for their win.

Wiz Brook and iiUnit took second place with 152 points and a tiebreaker over TSK Phantom and wiz Stilson. Snow and Souriano, who finished in first place yesterday, fell to ninth place but still performed reasonably well.

Stay tuned for coverage of the final day of the Winter Royale 2019 to see results for the top professional Fortnite players.