Floppy Knights has a pretty grueling Challenge Mode that plonks you in familiar locations but messes with the balance and objectives. This forces players to learn the ins and outs of the game mechanics, the cards at your disposal, and the enemies you will be facing.

Volcano Crusher, the eighth challenge, is the culmination of everything you have had to deal with up until this point. Hordes of ranged enemies, hazardous terrain, time limits, and fast, mostly, endlessly spawning fliers all make an appearance. Throw in some changes to the level design, and you are in for quite the rough ride. 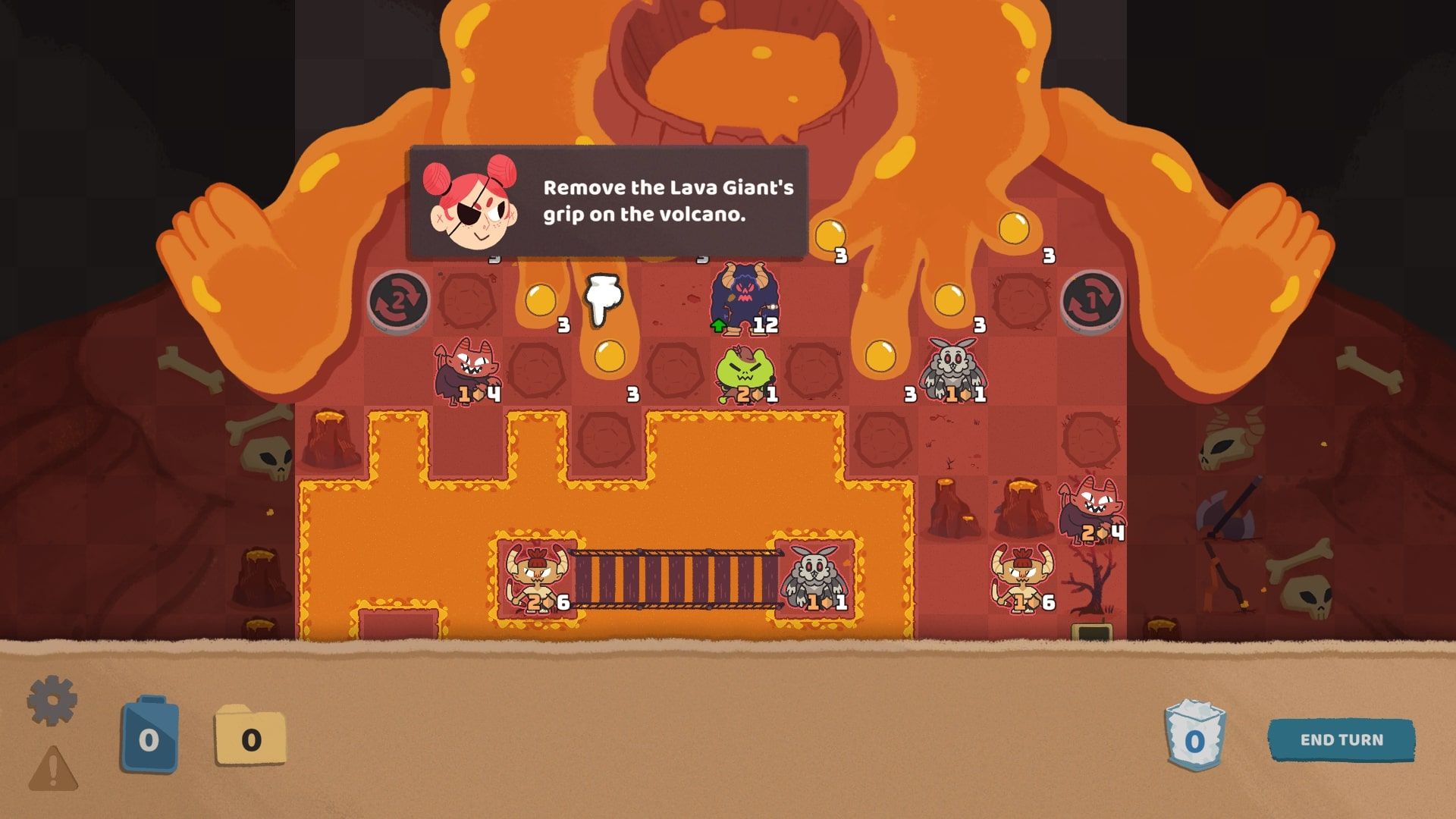 To complete this challenge, players need to defeat the giant lava monster at the end of the stage, and they must do it within 20 turns. This is the largest map Floppy Knights has thrown at you yet, and there are more enemies than ever before. Not only that, the level layout has been changed making it much more difficult to traverse.

Due to the RNG involved in this challenge, we can’t provide a full step-by-step walkthrough, but we can give you an overall strategy to work with to get through this. 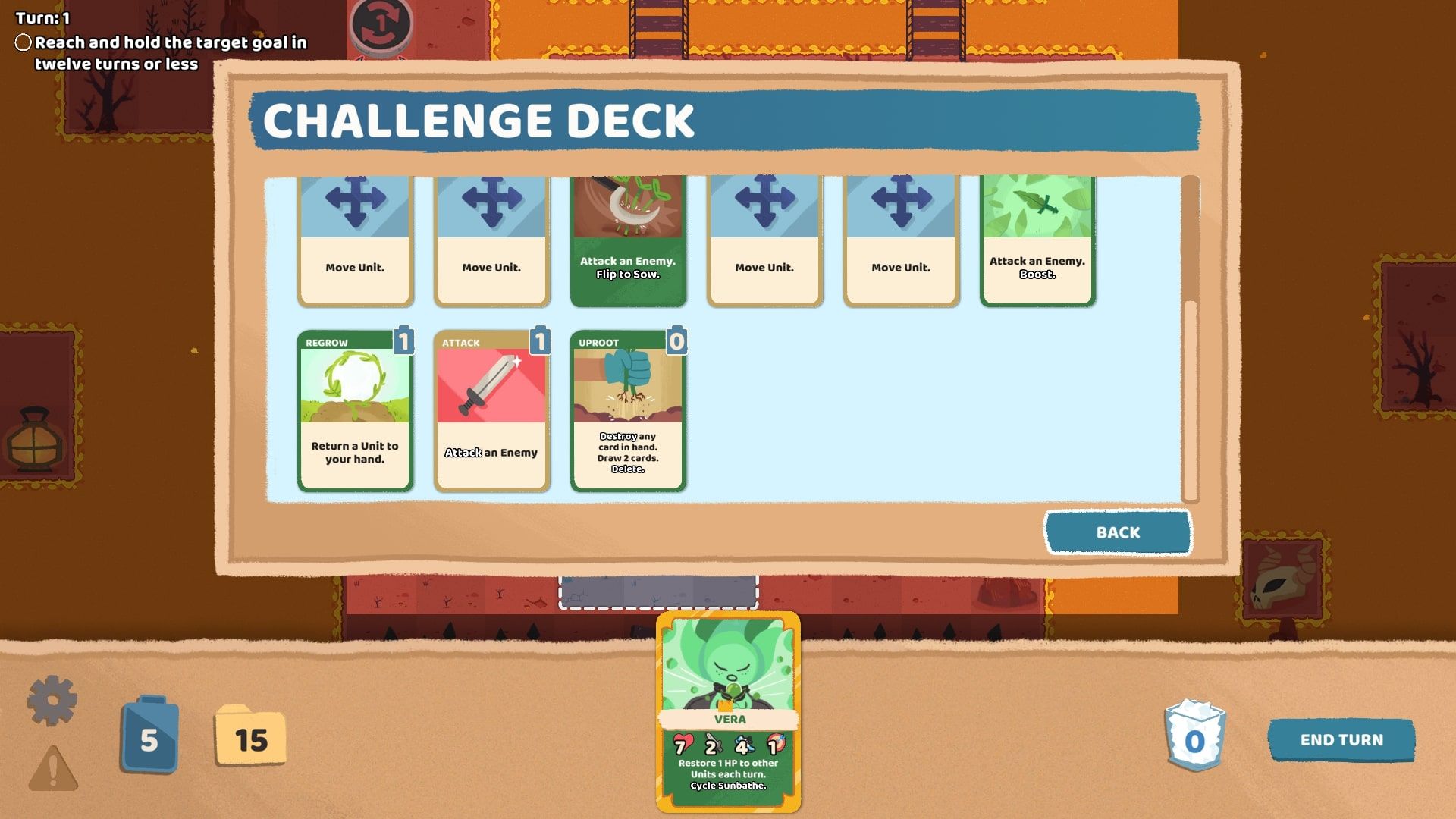 Your deck this time around has a focus on speed to the detriment of attack. You have plenty of units to play with, but you don’t have the cards to push an all-out offensive. This makes the deck very much about positioning, unit composition, and target priority.

Here is a brief overview of the key cards in this deck.

Vera is unfortunately massively underwhelming in this battle. Her movement is great, and her health is fantastic, but her damage is too low to be effective against the vast majority of enemies you will face.

Vera’s saving grace is her passive healing. This thing is, this heal will not benefit the team you are running. Many enemies can one-shot your units – not including Barrel Cactus. This means Barrel Cactus is pretty much the only unit benefiting from her inclusion.

Keep her safe and focus her damage on Behemoths if you can.

Bamboomer brings the damage to this team, and it does a stellar job providing you are in the right place as Bamboomer is very slow with a base SPD of two. This means he simply can’t keep up with the rest of your team.

You have two options with Bamboomer, either wait until you have captured the Forward Deployment Zone, or use Grow. Using Grow will increase Bamboomer’s SPD to three, which is on par with your other units. This boost makes Bamboomer a great mobile artillery unit.

Spitunia is your chaff killer. Spitunia is fast, has a ranged attack, and deals decent damage. It can kill Quiver Kids and Behemoths in a single shot, and it can kill a Troublemaker in two. With Grow, Spitunia will also generate a Poison Shot+, which is a very powerful attack buff attack – something this deck is sorely missing.

Barrel Cactus is your tank. They have great health, they do great damage, and they generate Cactus Juice. Providing you are not throwing them into unwinnable situations, a Barrel Cactus can draw the ire of enemies the entire Challenge and not die.

The strength of this is not to be underestimated, as enemies dying on their turn, without you having to spend cards, energy, or free attack actions, is a significant momentum swing. Vera, Cactus Juice, Sunbathe, Transplant, and Irrigation can all be used to keep Barrel Cactus alive.

Succulent Kicker is fast, and that’s about it. This unit has awful stats but is cheap to throw out and makes for a fantastic Spawner camper. Run him up when there are no enemies around and plonk him on a Spawner – easy. The real benefit of Succulent Kicker is the cards he generates.

Kick in particular adds another attack card into your deck, which you desperately need. If you have Grow on hand, you can even turn Kick into a zero Energy card, which is very handy.

Grow, as per usual, is a card that is wonderfully powerful, but requires you to make difficult decisions. Many cards in your deck can benefit from Grow, and deciding what cards deserve that bump is difficult.

You could consider using Grow to upgrade your other Grow card. This makes Grow a reusable asset, not a one-off, and it also allows Grow to generate additional Energy when used. This is a slower way to gain power.

If you want to just upgrade cards, then Barrel Cactus is an ideal candidate, as is Bamboomer. 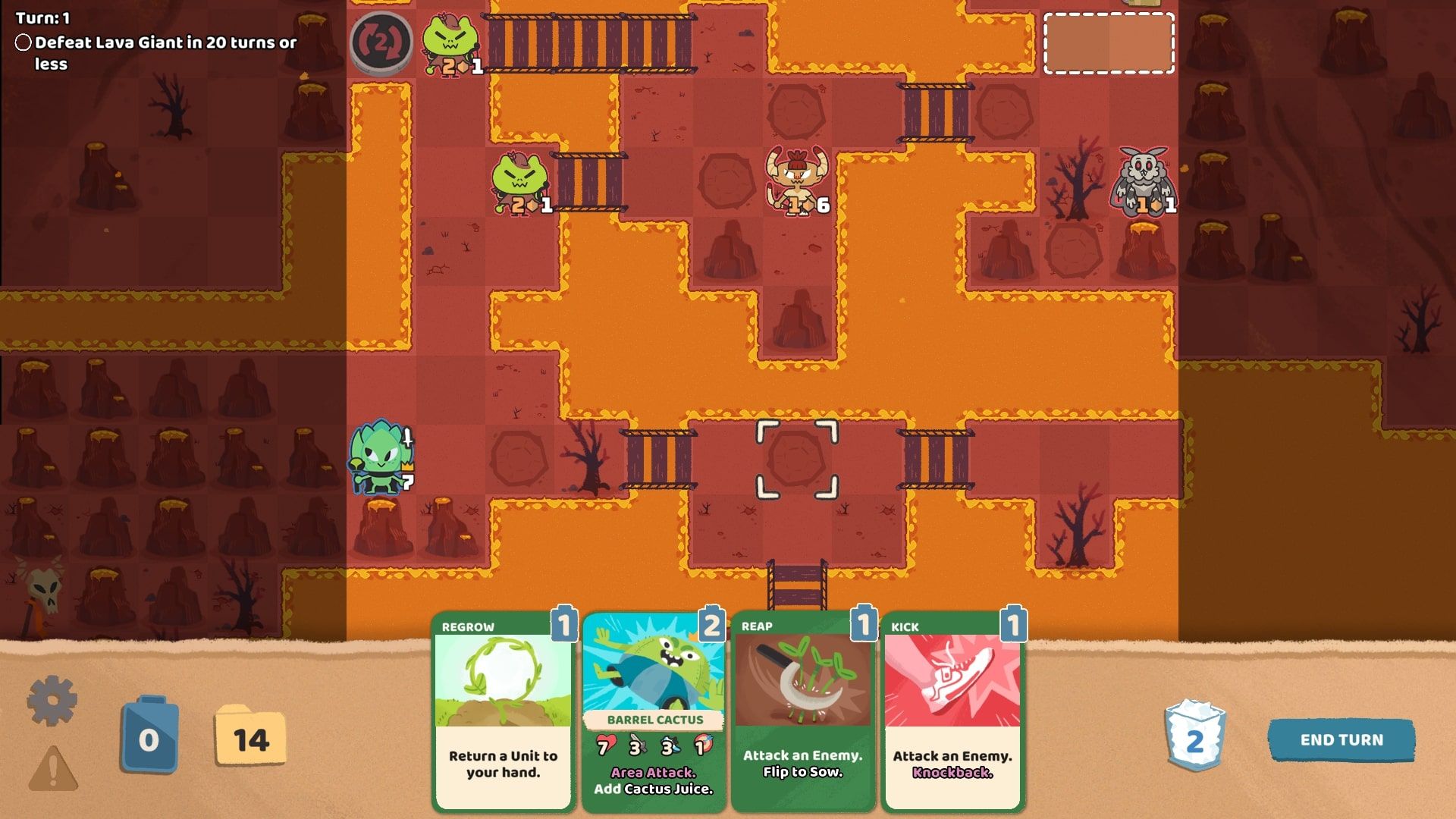 This will be a war of attrition. Enemies are in high numbers, and they are spawning regularly. Not only that, the path to your objective is long, winding, and littered with ranged and flying units. You will be assailed at all times in this mission, and careful planning will be required if you are to come out on top.

Take The Forward Deployment Base 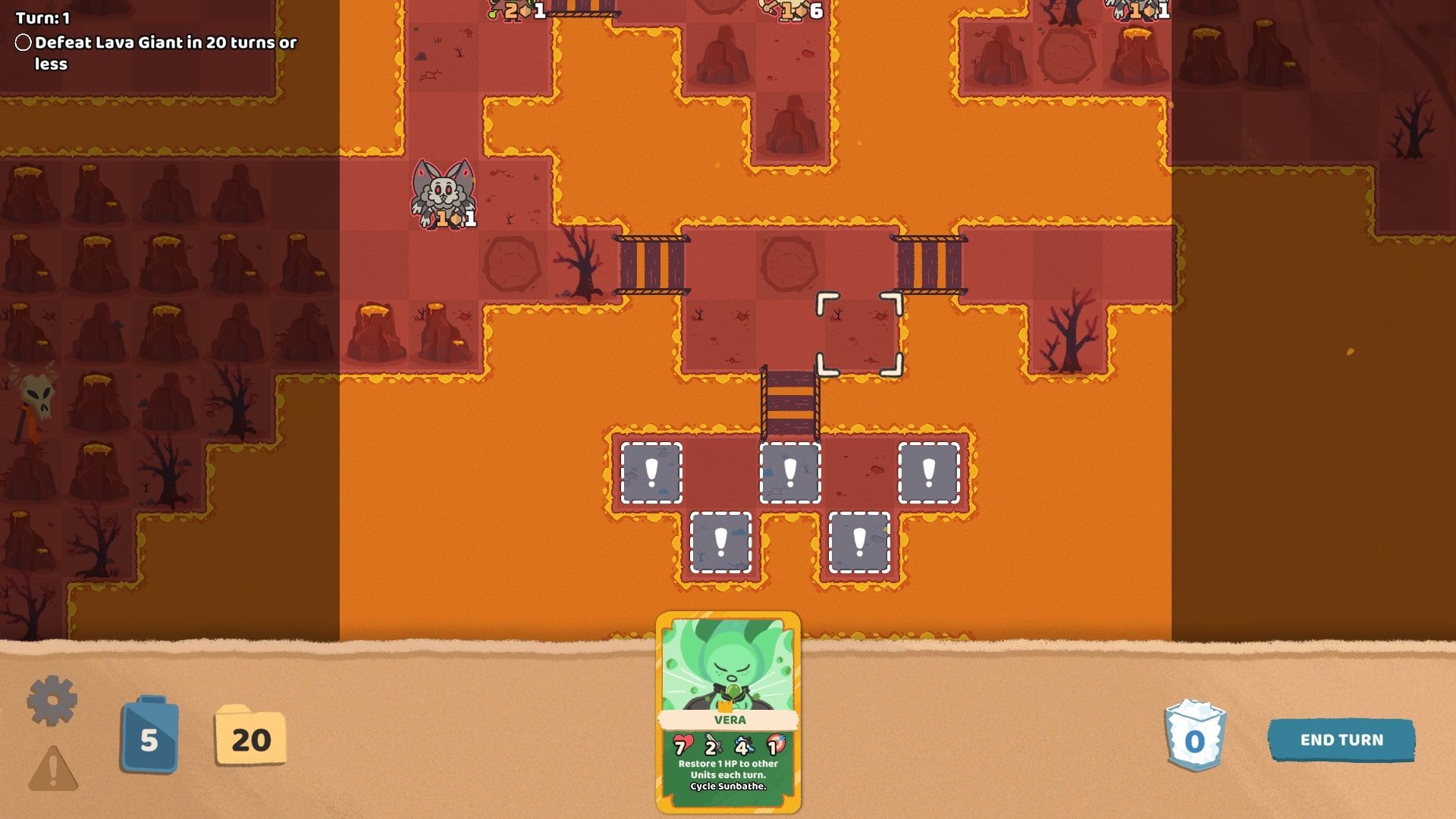 Due to how far this target is, it will take a few turns to get there. You will need to move your units together so that you can cover the ranged and melee threats that will be coming for you as you go towards your goal.

Move carefully and check threat zones at all times. Try and bait enemies to come to you, so you can take them out on your terms. Remember Barrel Cactus can take a beating, so you can use him to tank attacks so the rest of your team can push safely. 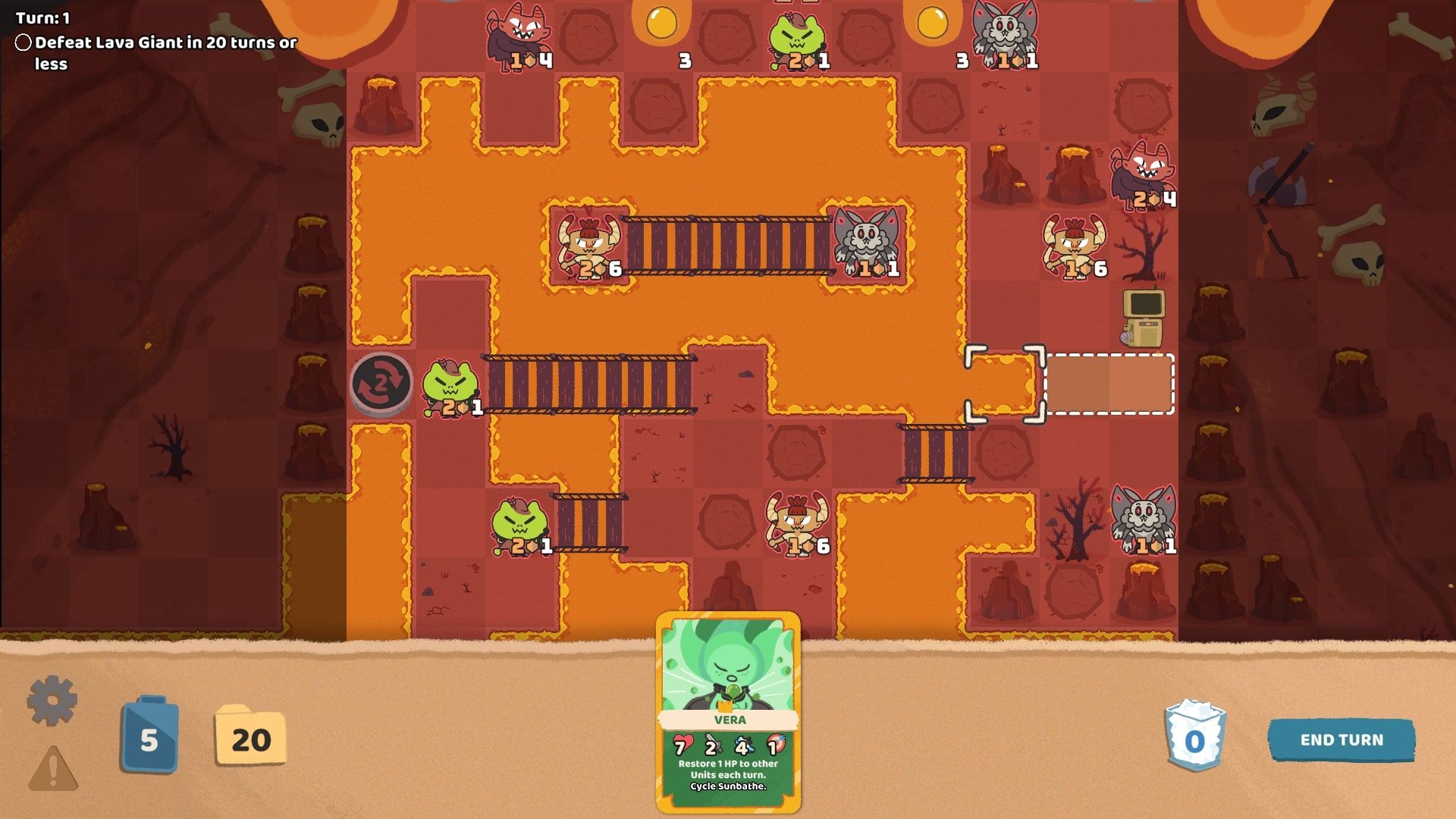 The last thing you want is for the enemy to send reinforcements to attack you from behind. Use units like Vera or Succulent Kicker to stand on Spawners to stymie the flow of enemies. Once you have done that, you can focus on targets that will die permanently – basically every enemy that isn’t a Behemoth. 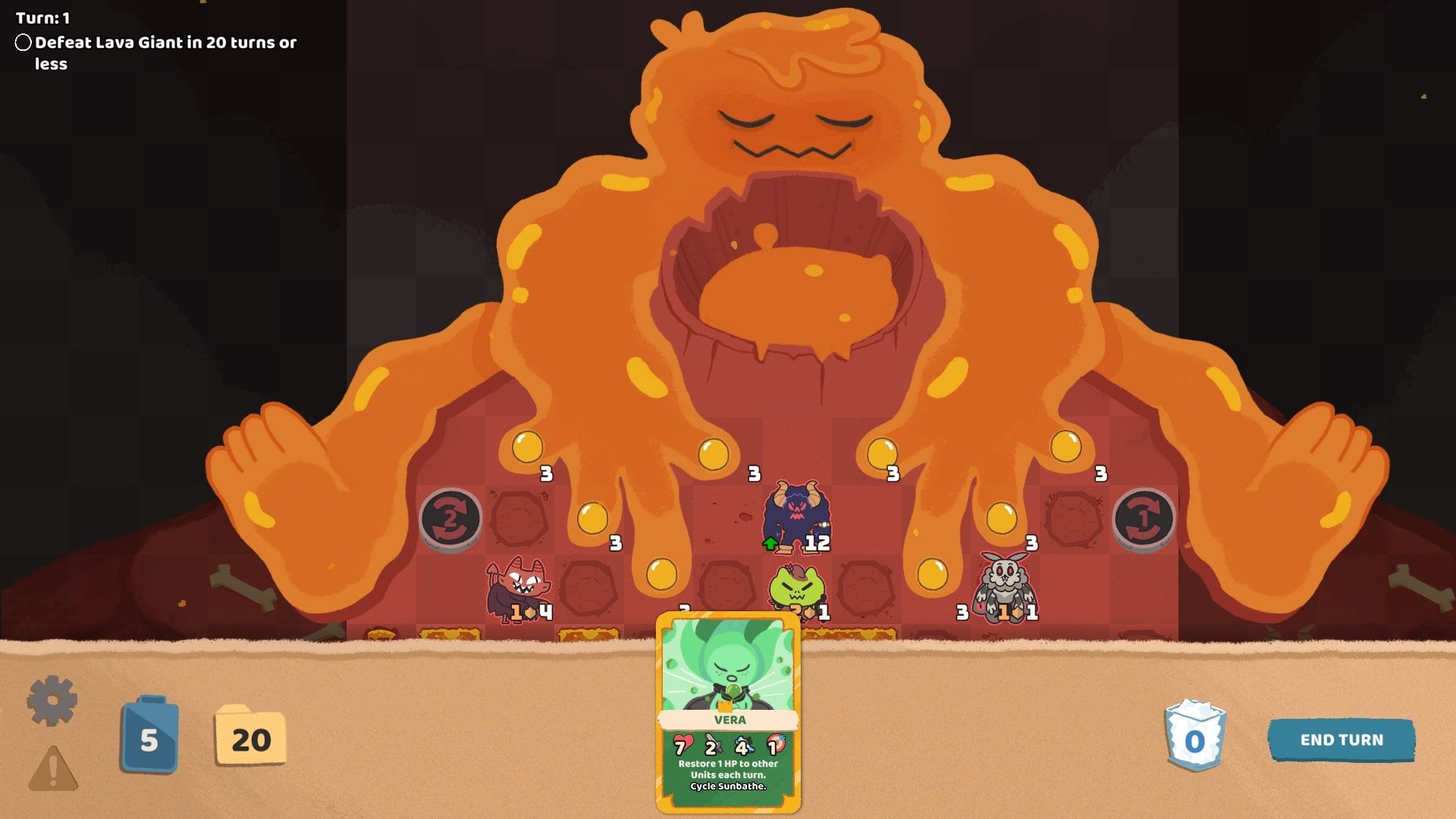 Big Mad is, as always, a bit of a puzzle. He has too much HP to throw units at without a plan, and if you can’t kill him, he will gain huge amounts of ATK. Either gang up on him with Barrel Cactus, Spitunia, and Bamboomer, or use Bamboomer solo and pump cards like Seed Sword and Poison Shot into him for huge burst damage.

The goal of this mission is to kill the lava monster surrounding the volcano. Like during the campaign, you need to destroy its exposed fingers. Because they tend to be clumped together, Barrel Cactus is ideal for quickly taking out a hand.

To this end, use your forces to clear a path and then send Barrel Cactus to destroy the fingers. If you have spare actions or cards, then of course use other units to help speed up the process