Despite a rocky launch, Cyberpunk 2077 still offers fantastic writing, interesting quests, and deeply layered characters. Many of Night City’s residents have their own questlines, taking you on heart-pounding adventures as you get to know these characters' goals and personalities.

Some of these questlines culminate in the opportunity for V to romance the involved character, and one of the most heartfelt interactions you can have is with River Ward, the hardened cop with a heart of gold. 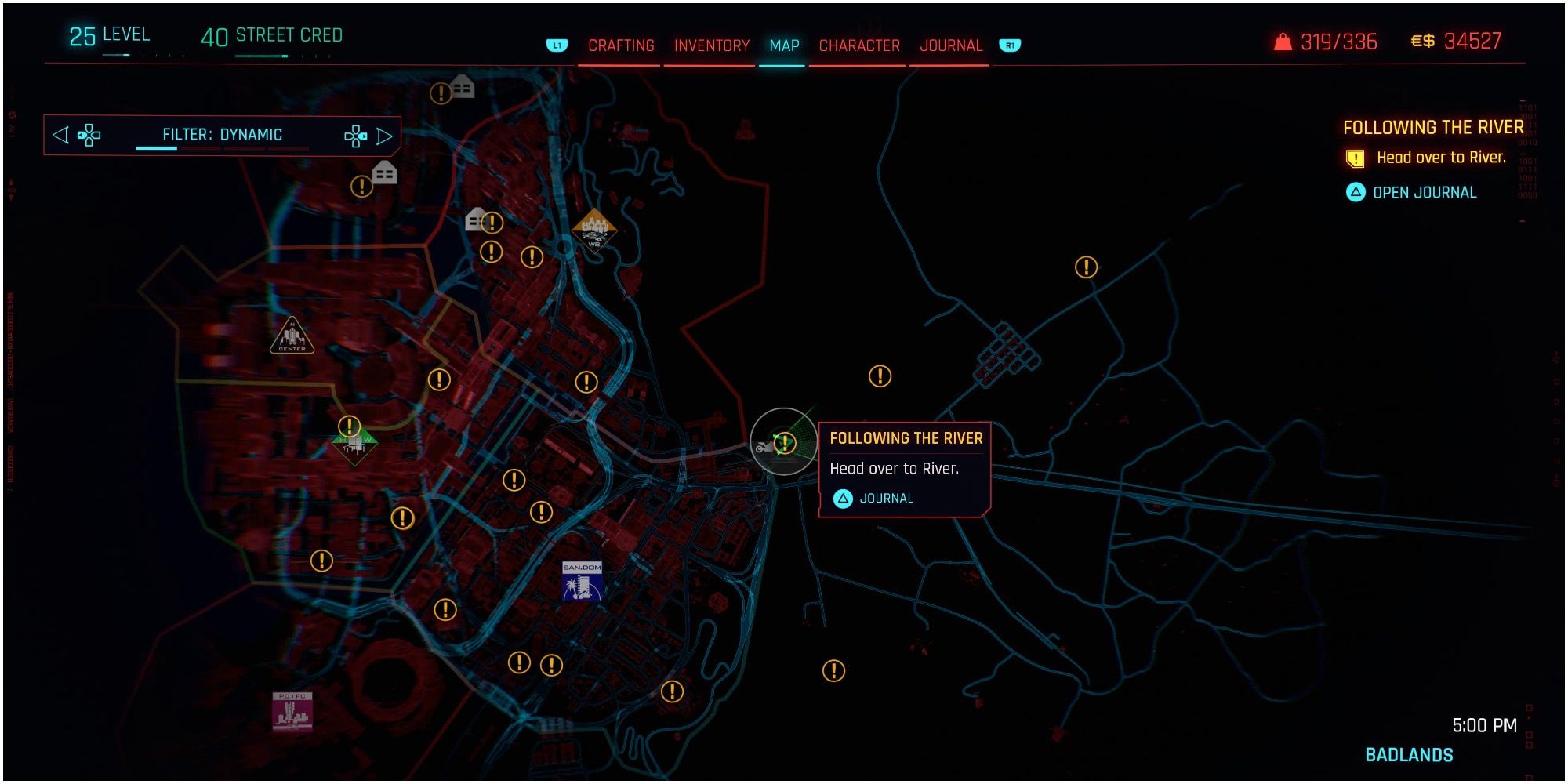 To begin the Following the River side job you must complete all of River’s previous quests first, and during them, be generally nice to the detective, flirting with him when you can.

Importantly, River is only available to romance for a V that presents as female.

To gain access to Following the River, save Randy during the quest named The Hunt, and express your interest in River during the final conversation of that quest.

For a full rundown of this, check out our Cyberpunk 2077 romance and relationship guide.

Following that, he should call you after a number of in-game days, inviting you to have a meal with him, his sister, and her two kids.

Accept this offer and Following the River will appear in your journal.

To begin the quest in earnest, head to the location pictured above and speak with River.

Making Dinner And Speaking With River 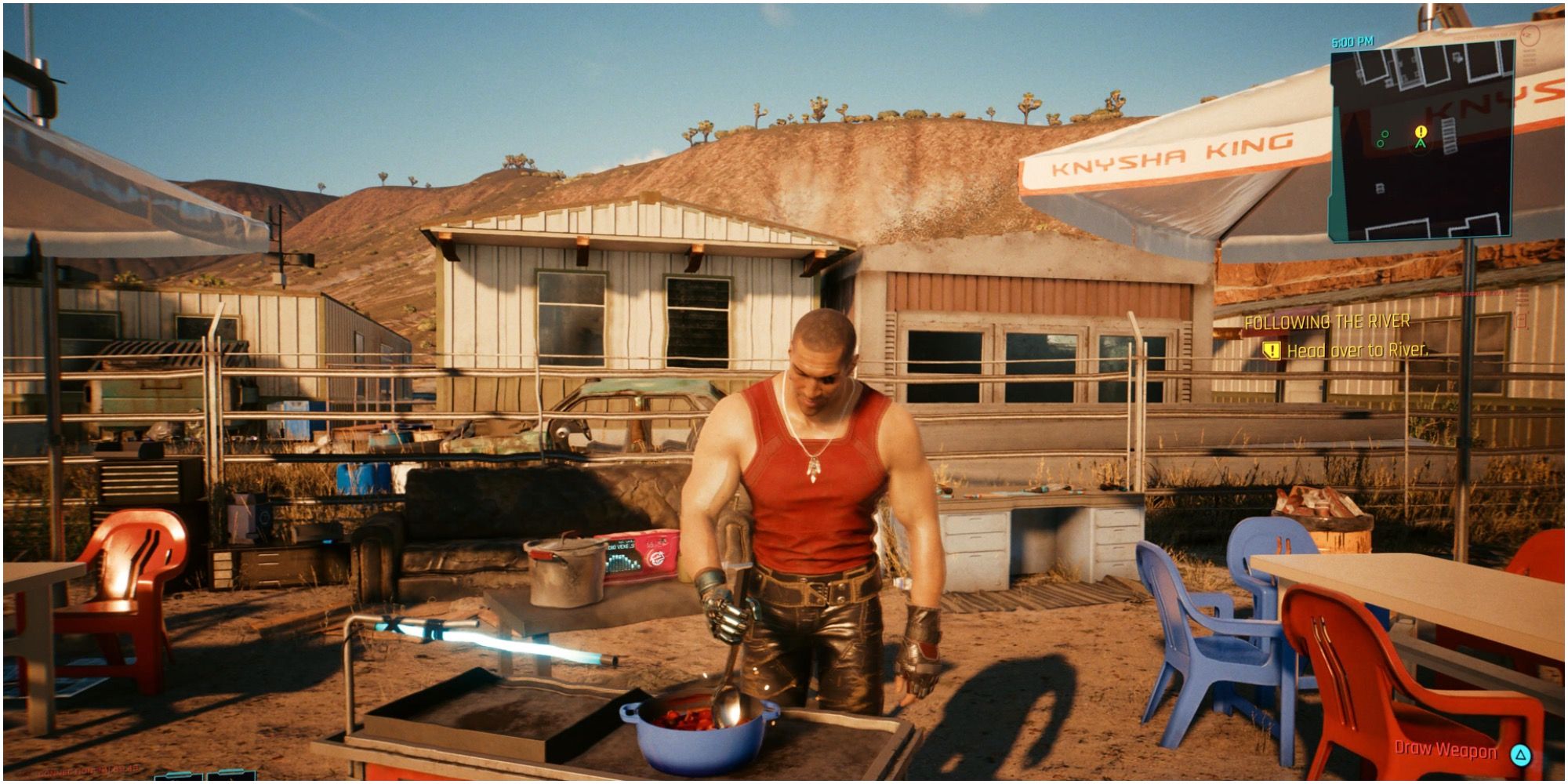 The most important thing to know if you are looking to romance River, is to always pick the option that indicates you are interested in him, and avoid the choice that could offend him.

Ultimately, like many of the romance encounters in Cyberpunk 2077, this is a relatively on-rails experience. Just pick the nice or friendly things to say and flirt when you can.

The mission will begin with River asking you to stir some of his home-made Jambalaya.

Following this, River will send you inside to get some rice. You'll find Joss here, so speak with her about Randy if you wish and then collect the rice for River.

River will then ask if you can speak alone. Agree, and listen to the story of how his parents passed away.

You can interrupt this story by telling him he doesn’t have to speak about such personal issues, and this will not harm your chances of romancing him.

The Dinner And The Game 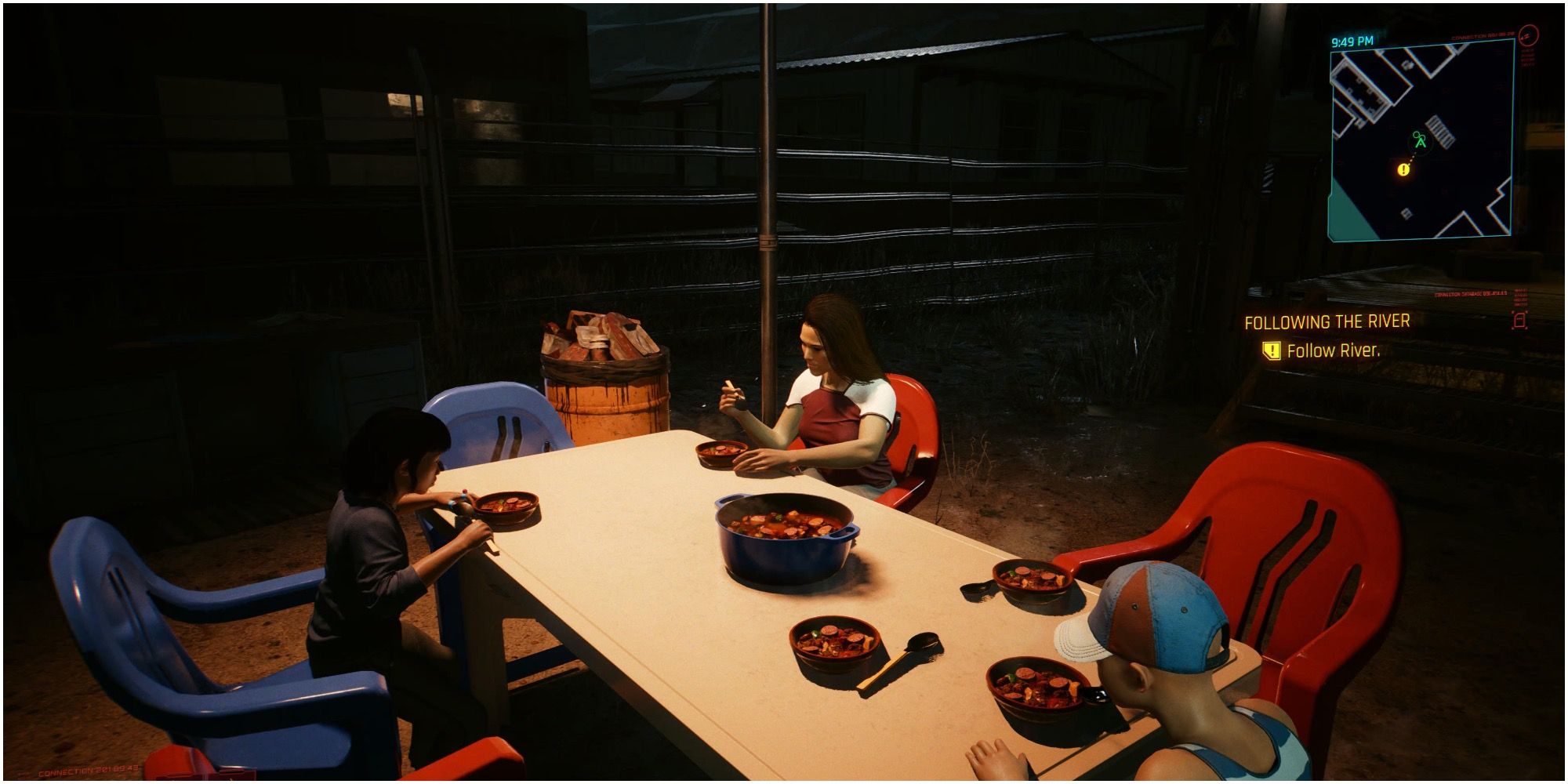 Eventually your conversation with River will be interrupted by the kids asking you to play a game with them.

Agree, and enter the VR game. River asks you to let the kids win here, so do so to make him happy.

The dinner with River, Joss, and the kids is another relatively on-rails experience. You can sit, eat, and chat. Eventually the kids will start to poke fun at V and River, about them maybe being a couple.

At one point they will say “raise your hands if you think V and River would make a cute couple” once again. You can choose to flirt with River here or not, it should not ruin your chances of romancing him.

As the dinner comes to an end, River will say it's time for the two of you to talk, beginning the most important part of this side job.

On The Water Tower With River Ward 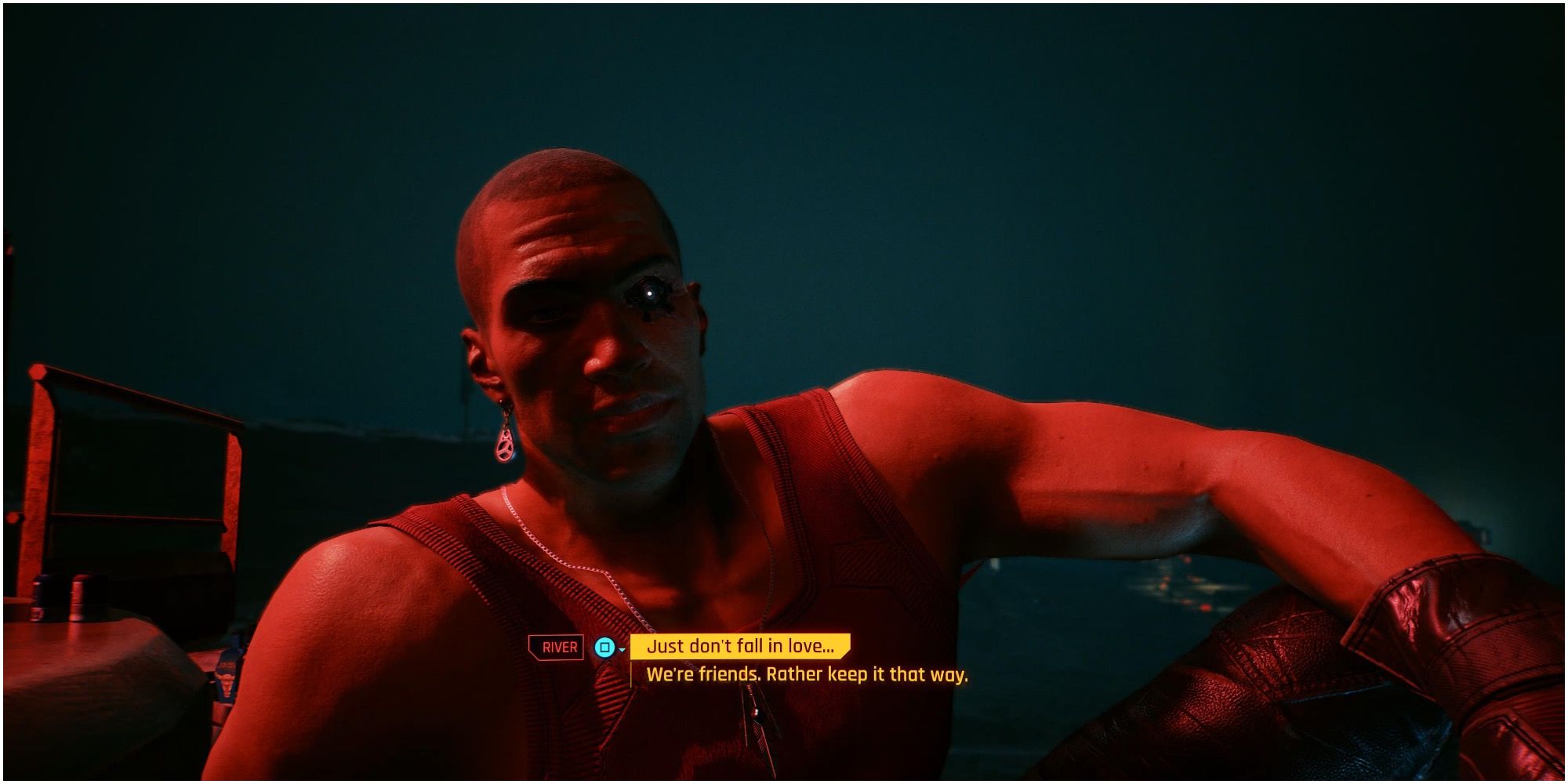 As you get up from dinner, River will lead you to the top of the water tower. This will involve a bit of climbing, and opening a locked door for River.

Once up there it is important which dialogue choices you pick if you want to romance the former police officer.

You will sit down with River, gazing at Night City, and he will hand you a powerful iconic revolver named Crash. This is a very potent weapon, especially if upgraded.

Choose these dialogue options in order to romance River and unlock the sex scene.

With that, the sex scene with River will begin. If you shoot down his advances, there will not be any hard feelings, and the two of you will spend a night partying and getting drunk as very good friends. 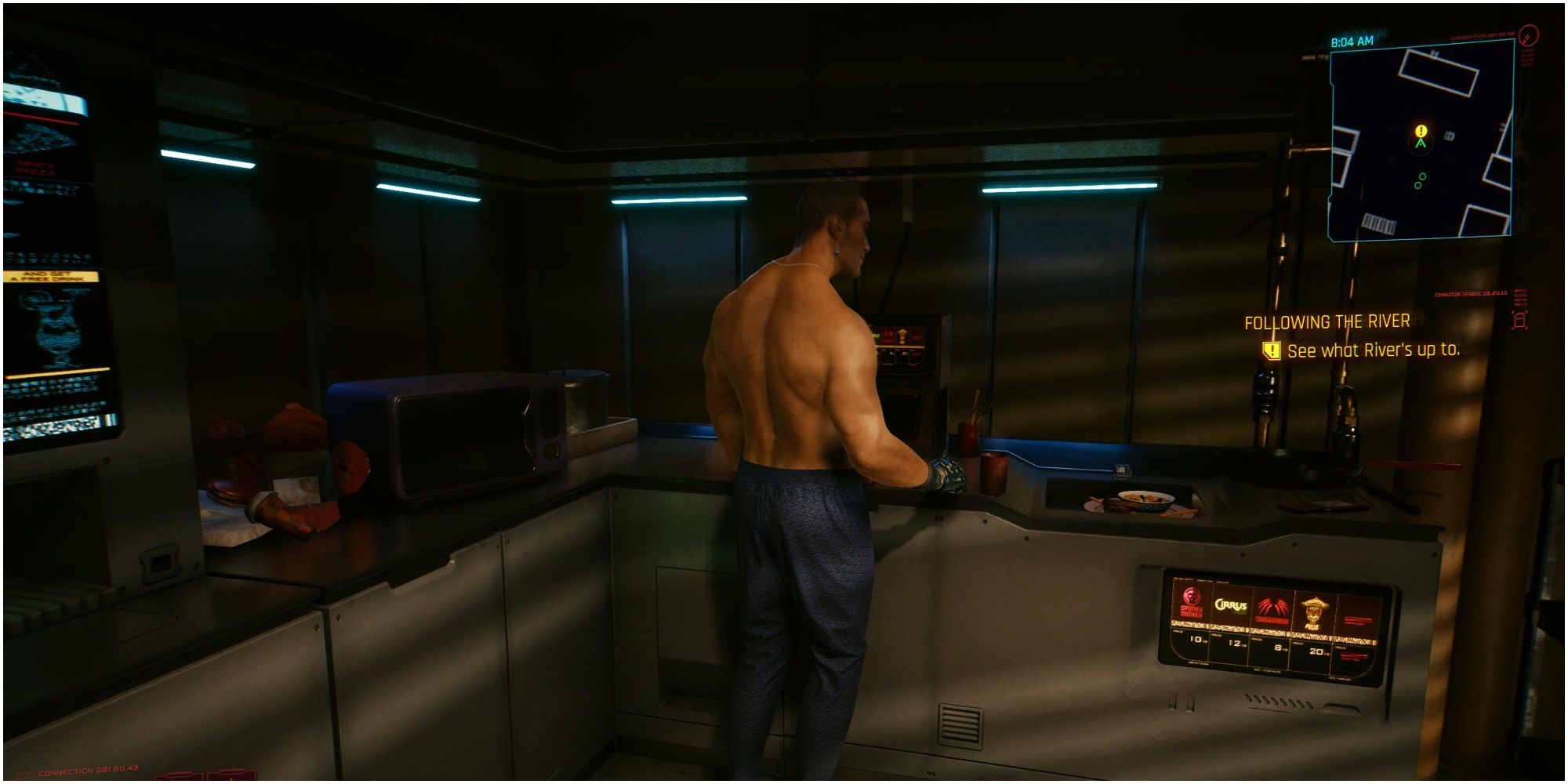 If you chose not to sleep with River, there will be a brief, and funny, conversation with the ex-cop, before he heads off with Joss to see Randy.

Even if you did not romance River, he will continue to send you texts about himself, Randy, and your friendship.

If you did sleep with River, this is your chance to lock in your romance. Pick the option to kiss him again, and tell him you enjoy his company.

If you want this to be nothing more than a one-night stand, explain to River that it was purely physical, and break the poor man’s heart.

With that, V will then go on to explain her situation, telling River about Johnny and that she will soon die. River is as supportive as you would expect.

In a mission towards the end of the story, you will have the option to call River if you romanced him.

That completes Following the River. The police officer will continue to contact you via text throughout the game.