Home » News » Black Desert Mobile: Everything You Need To Know About The Black Spirit

Black Desert Mobile: Everything You Need To Know About The Black Spirit

The Black Spirit is the first to greet players as their character comes to consciousness on the beaches of Velia and it accompanies the adventurer from thereon. Shapeless at first, the Black Spirit is a mysterious entity whose intentions are unclear, though it has an insatiable appetite for dark energy.

Its constant search for power through the player is reminiscent of a parasite feeding off of its host. However, the power gained contributes to the player’s combat power (CP) and the Black Spirit itself serves the adventurer as an invaluable guide.

The Black Spirit first proves itself to be an apt- and slightly sardonic- tour guide. It introduces players to all aspects of the game from basic movement controls and battle skills, to the interface layout and how to navigate the various screens. Players can expect some sort of explanation from the Black Spirit when encountering any new feature throughout the game.

Feeding and Interacting With The Black Spirit

On the left side of the Dark Energy screen, there is a list of skills attainable at Black Spirit levels 40, 60, 80, and 100. As the Black Spirit reaches these levels, the skills unlock and are usable in battle outside of the adventurer’s equipped skill set.

Back on the “Black Spirit’s Influence” page, “Leveling Perks” may also be viewed. These are perks that are applied automatically as the Black Spirit attains various levels. There is a slew of other possible interactions on this page as well. The Black Spirit oversees the enhancement of equipment, then transferring those enhancements to new gear when the time comes to switch out. Weapon and Armor enhancements require Black Stones which increase the success rate. Accessories are enhanced by combining two of the same item.

Another one of the Black Spirit’s jobs is to equip gear with Crystals then extract them again as the gear is retired. Crystals provide further boosts to stats such as Critical Hit Chance, Attack, or Defense and may be equipped to weapons and armor, but no other accessories.

The Black Spirit also assigns “Black Spirit Quests” which are general slasher tasks such as ‘Kill 1,000 Enemies’. These quests reward items like Boss Rush Stamps for Boss rematches at the Rush Board, or Ancient Tablets to level battle skills. 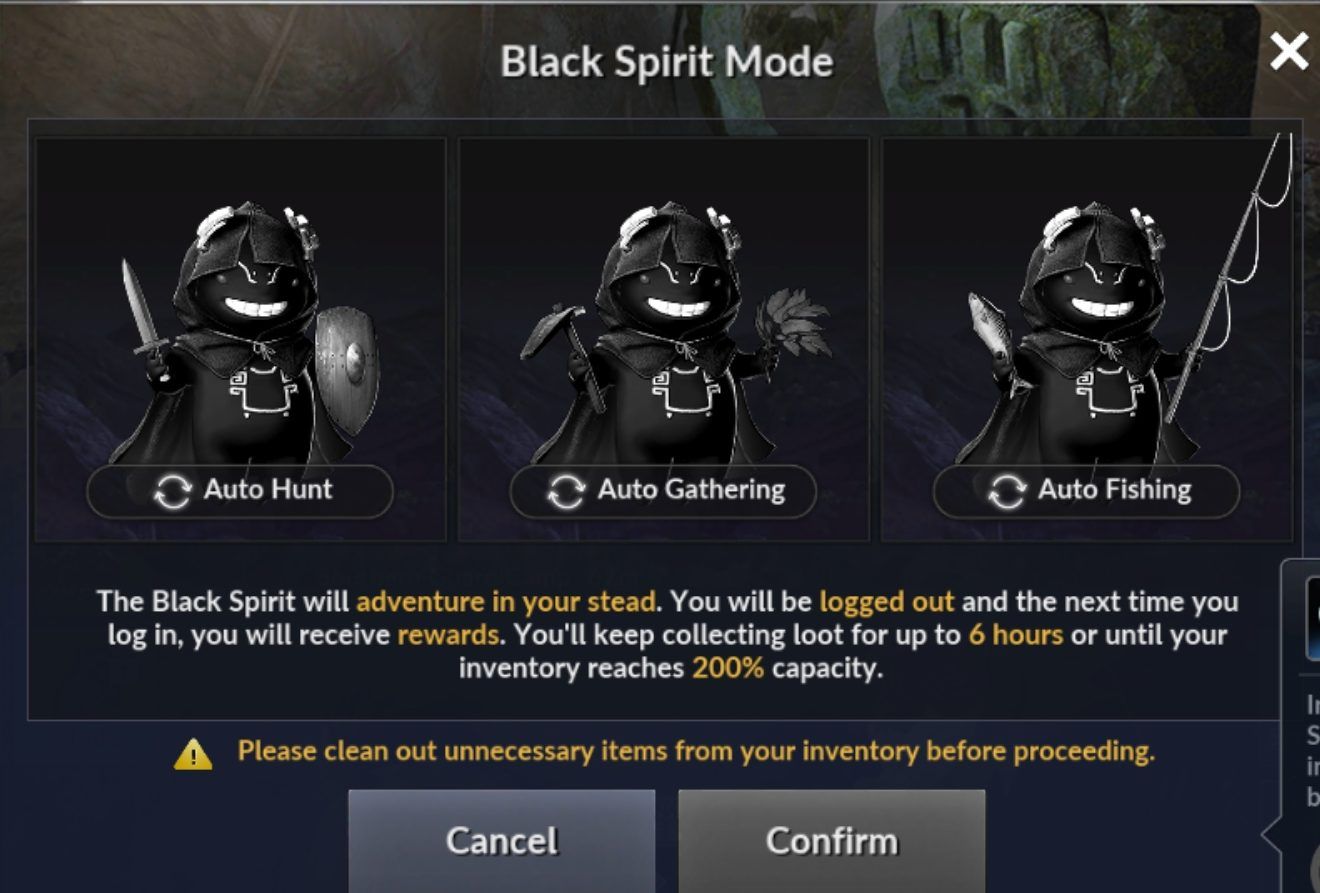 Black Spirit Mode is an idol mode, allowing players to collect resources while offline. When activated, the Black Spirit will adventure in the player’s stead for 3 hours (which can be boosted to 6) or until inventory reaches 200% capacity. To activate Black Spirit Mode open the main menu at the top right on the overworld screen. Then select “Black Spirit Mode” at the very bottom of the menu and choose one of three auto-adventures.

Players will receive the rewards upon logging in again, along with a whole mess to sort out in their inventory. Because of this, it is recommended to organize the inventory and clear out all unnecessary items before entering Black Spirit Mode.

The Black Spirit is a boon companion throughout the player’s adventures in Black Desert Mobile, having its hand in every aspect of the adventurer’s development while simultaneously growing stronger itself. Despite all of the help it provides, its unquenchable thirst for power is a little disconcerting and other characters within the story share similar misgivings and distrust for the sassy tag-along.