Audeze Mobius Review: The Top Of The Gaming Headphone Mountain Has 3d Audio

Close your eyes and picture a pair of gaming headphones. You’re probably imagining some blocky, over-the-ear cans with RGB lights blasting out of a laser-etched logo. What if I told you the best gaming headphones you can buy looked nothing like that at all. A pair of headphones that not only sound incredible but also, no BS, will actually improve your game, and doesn’t have a single light strip or decal? The Mobius headphones from Audeze made a believer out of me in a five minute demo at PAX East last month, and now, after using them exclusively for the past two weeks, I’m convinced these are the highest quality gaming headphones I’ve ever heard.

Audeze (pronounced like odyssey) is fairly new to the gaming market. Their bread-and-butter products are high-end headphones for audiophiles and audio professionals. Their headphones are used broadly throughout the film industry to mix and master movies. It makes sense then that their gaming headphones would not only be of the highest quality, but their style would also reflect the companies unique path into the world of gaming. 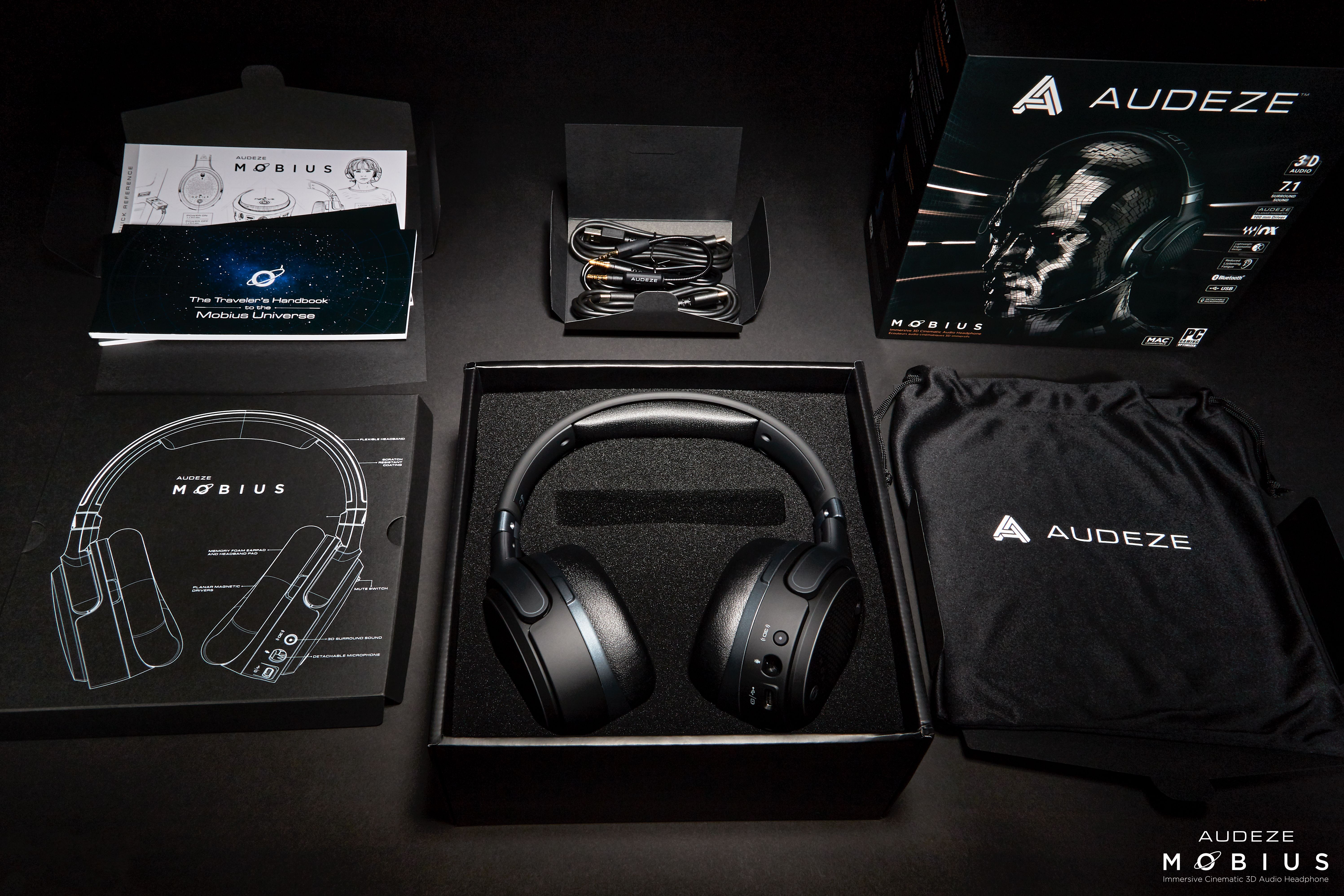 I got to visit Audeze in Irvine, California and take a look at their manufacturing process. Their Planar Magnetic drivers are made entirely within their facility and, as I understand it, through a process no one else in the world is using (and never will, thanks to their patented technology). The audio quality of the Mobius headphones is absolutely unreal and something you simply have to experience for yourself. Before we even get into gaming features, the 7.1 surround creates a movie watching and music listening experience that’s cinema-quality. During this period of social distancing when movie theaters are inaccessible, the Mobius has been my constant companion for movie watching when I’m not gaming, and music listening when I’m working.

But every pair of 7.1 surround sound headphones claims to have superior audio quality, so let’s talk about what makes the Mobius headphones so revolutionary: the 3d audio.

Do you ever turn your head slightly to hear something better? It’s an instinctual move that’s actually been proven to improve sound recognition, isolation, and even cognitive assessment. It means that when you turn your ear towards a sound, you can hear it better by filtering out all the other noise, and your brain does a better job at processing what you’re hearing. It happens instantaneously and subconsciously. Now, imagine you could do that while playing Call of Duty. 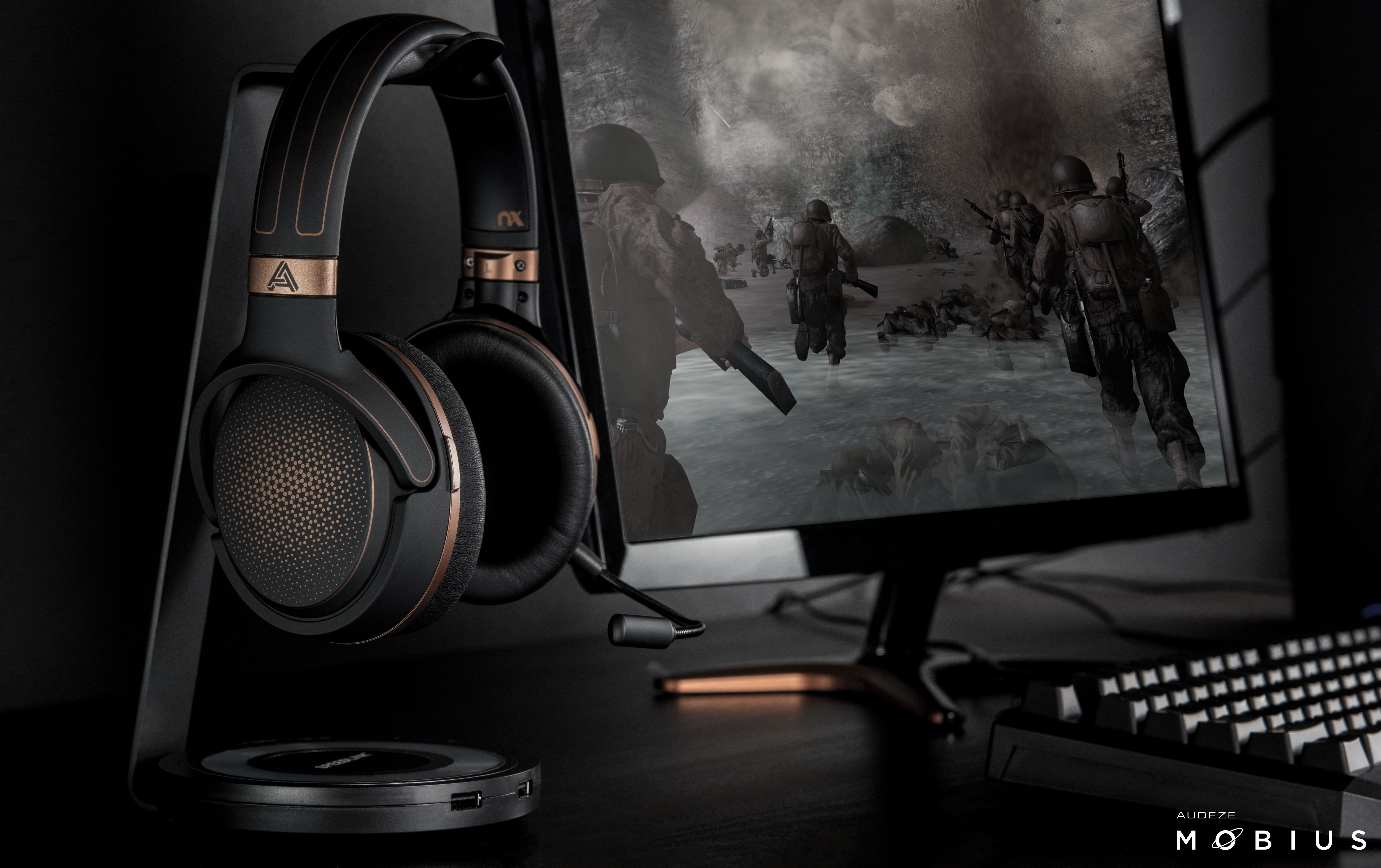 The Mobius headphones use low-latency precision head tracking to create realistic 3d audio for games. All it takes is a press of the 3d button on the front of the left cup to center it and the head tracking starts working immediately for every game. With normal headphones, when you turn your head the game sound turns with you. With the Mobius headphones, the sound stays positionally accurate. If someone is walking in front of you, turn your head left, and you’ll hear their footsteps in your right ear. It’s a little freaky at first because you’re very suddenly, and for the first time, hearing game sound as you would in real life. The effect though is better situational awareness and greater immersion.

Head tracking isn’t the only thing that goes into 3d audio though. As next-gen approaches 3d audio (and how it’s implemented) is going to be a major topic that Sony and Microsoft will be iterating on in their consoles. Audeze is already a step ahead though. The Mobius uses Wave Nx 3d processing technology to better simulate the sound of games in 3d space. The effect is truly undeniable. 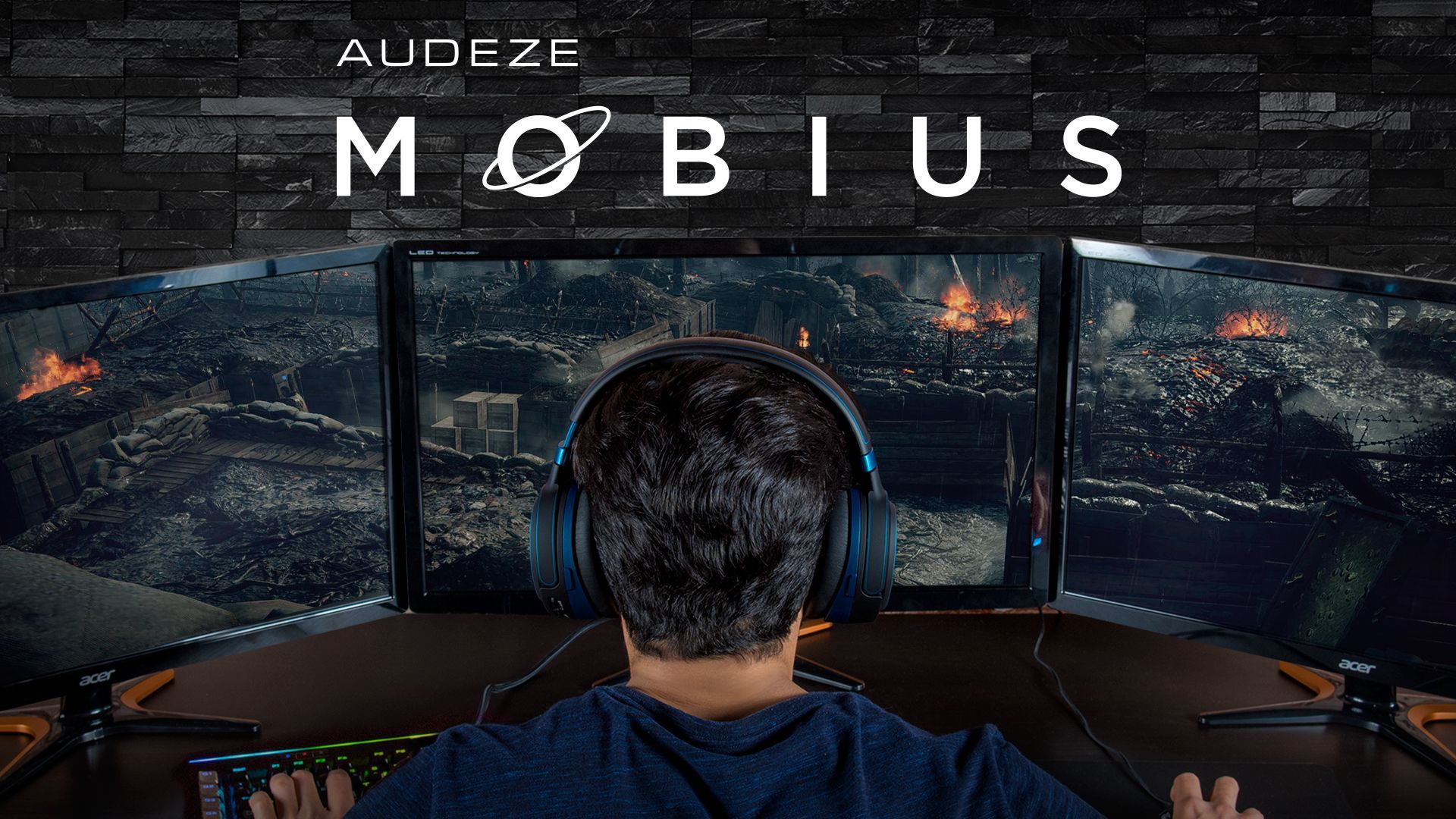 3d sound isn’t just about the direction of sound sources though, it’s also about space and distance. Before using the Mobius, it never occurred to me that there was more to sound distance than volume. Things that are further away are just quieter, right? The Mobius showed me there’s so much more nuance to spatial sound than that, and for the first time, I think I really heard the sound of something happen 10 feet away, just to my left, on the floor. It honestly scared me a little how real it sounded.

As For The Rest, Very Few Complaints

It’s hard to find anything I don’t like about these headphones without nitpicking. The microphone sounds crystal clear, but it’s fully detachable. I don’t like a microphone I can lose, and my cats love to bat it around, so that’s a problem for me. They also don’t have a low-latency wireless adapter. They have BlueTooth, USB, and 3.5 mm, which is great if you want to use them with multiple devices, but for wireless gaming, low-latency is a must. The headphones come with a five foot USB cable as well as an audio cable. Fine for plugging into the front ports on your PC, but if you intend to connect them to the back you’ll really need a longer cable.

What I really love is the EQ presets. Instead of basic settings like “movie” and “game” they have profiles for things players actually care about. There’s a footsteps preset that brings out the sound of footsteps, making them easier to hear. That’s been a major issue for Call of Duty: Warzone players. With the Mobius, I was able to hear footsteps much clearer. There’s also a ballistics setting to really bring out the power of gunfire and explosions for a more immersive experience. I didn’t get a chance to try out the RPG and Racing presets but I really appreciate that Audeze is including features that are actually meaningful and useful. 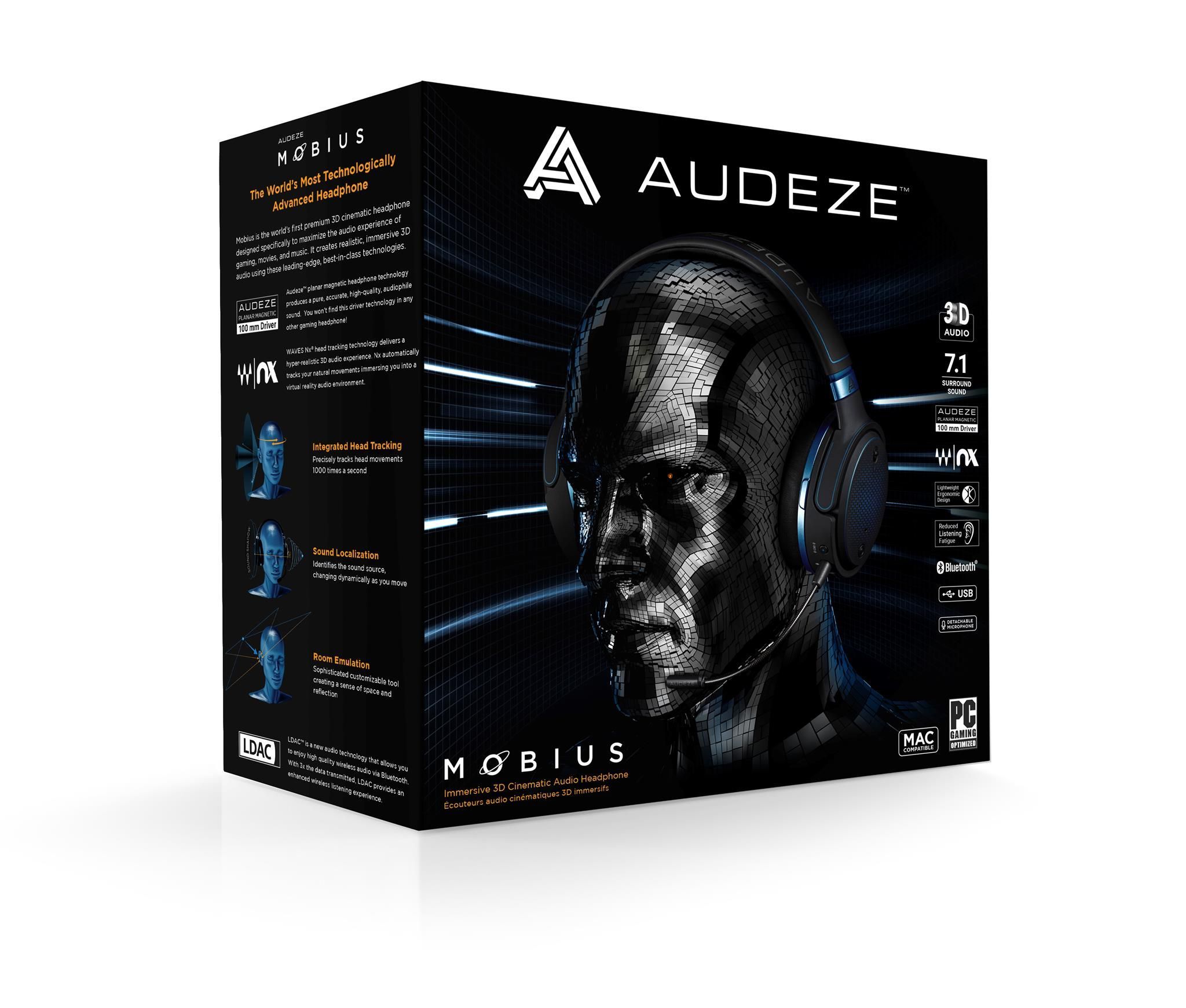 The Audeze Mobius gaming headphones are at the highest end of gaming headphones but it’s for demonstrable, clearly recognizable reasons. This headset is doing so much more than simply producing really good sound. The 3d audio features are simply unbelievable and create, at the risk of abusing the term, a level of immersion I wasn’t aware was possible. If you want the best, this is it.

A pair of Audeze Mobius headphones was provided to TheGamer for this review. You can learn more about the Mobius on Audeze’s website. 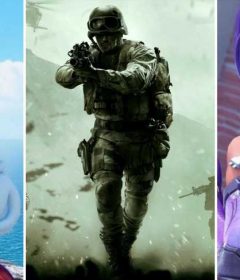 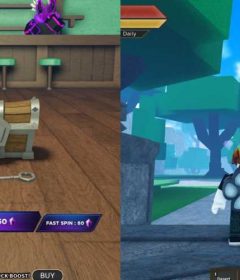 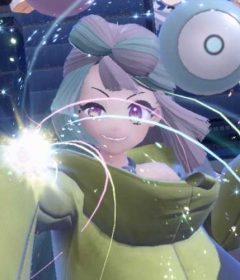