Home » News » 10 Most Difficult Puzzles In The Professor Layton Series

10 Most Difficult Puzzles In The Professor Layton Series

Professor Layton isn't your average puzzle game series. If you're used to physics-based tomfoolery à la Portal 2 or environmental thinkers like The Talos Principle, the good Professor's style may come as a bit of a culture shock. Comprised of logic puzzles, sliding block tests, and often riddles, Professor Layton as a series confounds and charms players in equal measure.

With six mainline games and several whimsical spin-offs, you're in for a treat. However, the puzzles below are not for the faint of heart — tricky, detailed, and dastardly, they'll probably have you banging your head against a wall. Good luck! 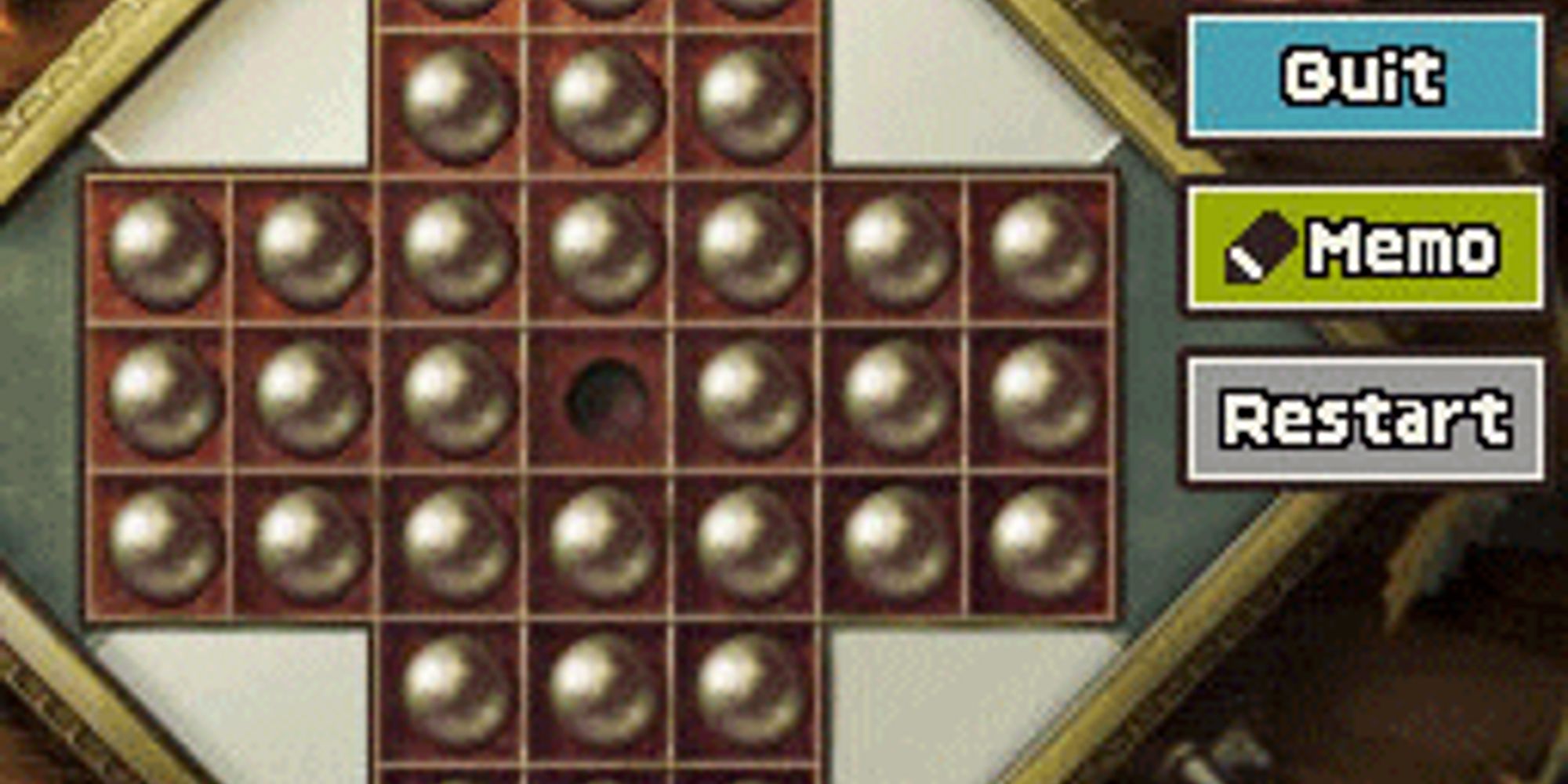 Have you ever seen Triangle Peg Solitaire? It's a game played on a triangle board, a wooden triangle with about fifteen holes along its surface, and using fourteen pegs that fit into these holes, you have to jump over as many of the other pegs as possible and into an empty space behind them. The goal is to jump over every peg, therefore clearing the board.

If you play Professor Layton and the Diabolical Box, you might notice some familiarity with these rules. As it turns out, a very evil game designer at Level 5 thought it might be fun to play a good old-fashioned game of Triangle Peg… but far more sadistic in nature. Not only is the board larger, but there are also more "pegs" (or in this case, steel balls). Good luck! 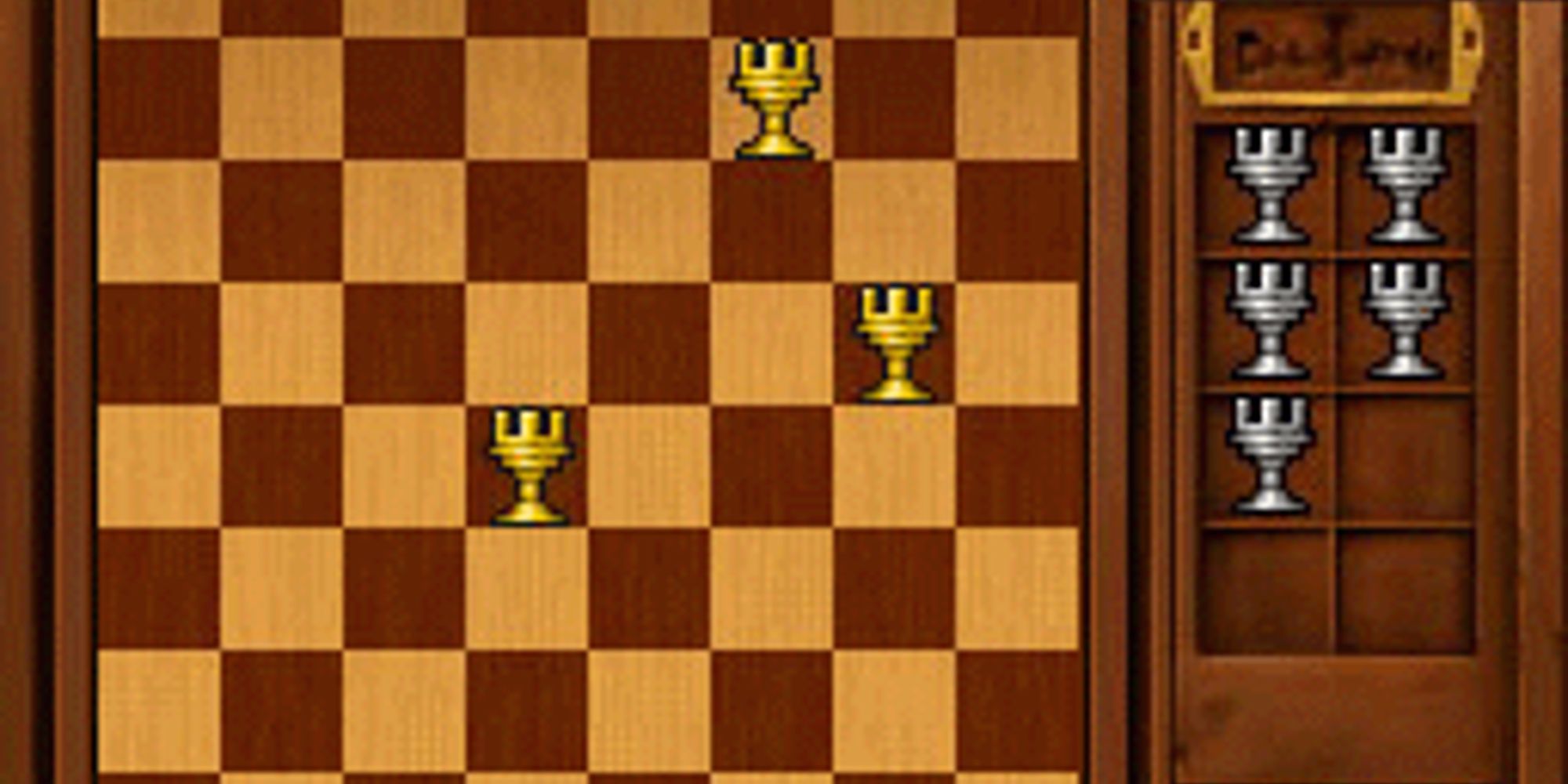 Has the Professor ever considered setting up a chessboard the right way? This seems to be a recurring problem for him throughout Professor Layton and the Curious Village if the number four attached to this puzzle title is any indicator. If there are too many queens, maybe he should try to remove some of them, or maybe he should find out who has been stealing his other chess pieces and replacing them with extra queens! My money's on Don Paulo.

In Too Many Queens 4, you'll need to place the five silver queens on the right side of the screen onto the chess board. The catch? They can't block one another's paths. If left to their own devices, these queens will simply plow through one another, sowing chaos in their respective kingdoms. 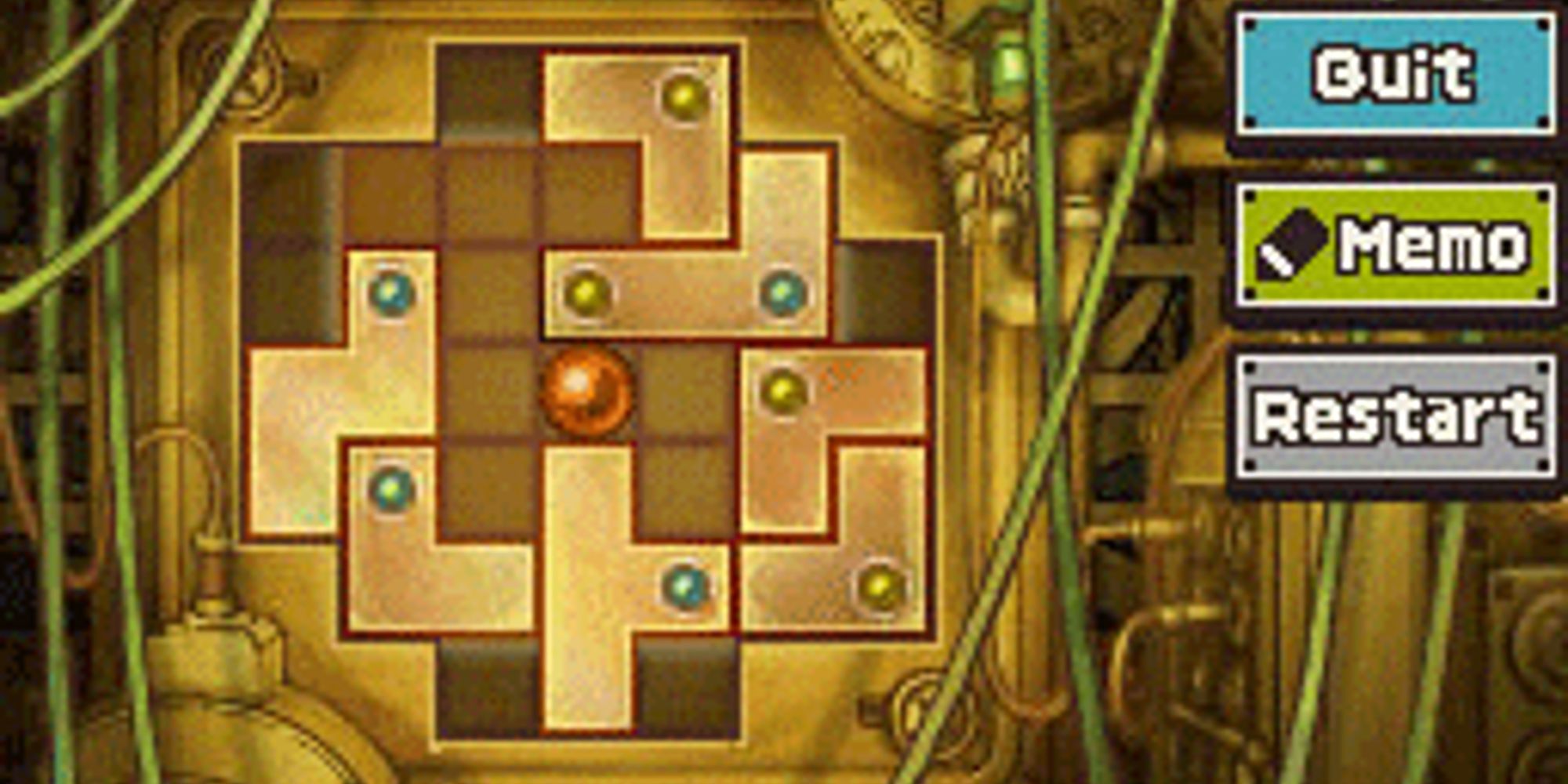 Everybody loves a block puzzle, right?

Wrong. You will suffer for this puzzle. You will beg for the sweet release of death as you position Tetris-esque blocks inside a bizarre polygon to build a time machine that you won't even get to ride in. A shame, isn't it? And adding insult to injury, this puzzle is not a requirement, but a bonus reward for clearing the game! Congratulations!

But don't worry — Professor Layton and the Unwound Future will make you cry in plenty of other ways, too. The game's excellent storytelling more than makes up for the tearful hours spent scouring London for Hint Coins. Don't give up! 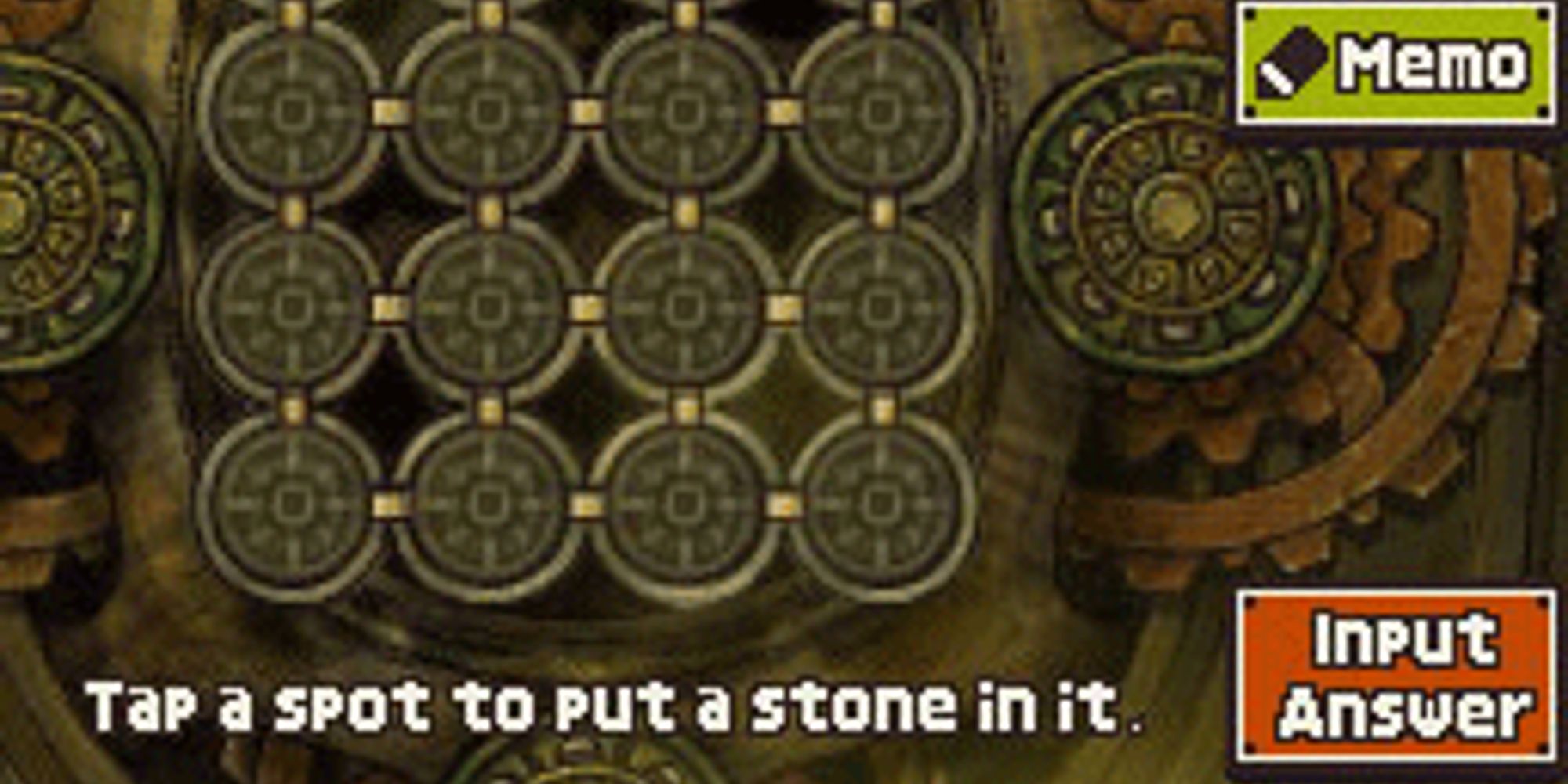 Once again, Unwound Future delivers another mind-bending puzzle that must be featured on this list. The rules for this one are a doozy — you'll need to place round stones on top of the sixteen shown receptacles. Seems easy, right?

Here's the catch, though: no four stones can be arranged in a square or a rectangle, either horizontally or vertically. How many stones can you place on the board here, following that rule? Anyone who failed geometry in high school will find themselves curling into a ball pretty quickly. 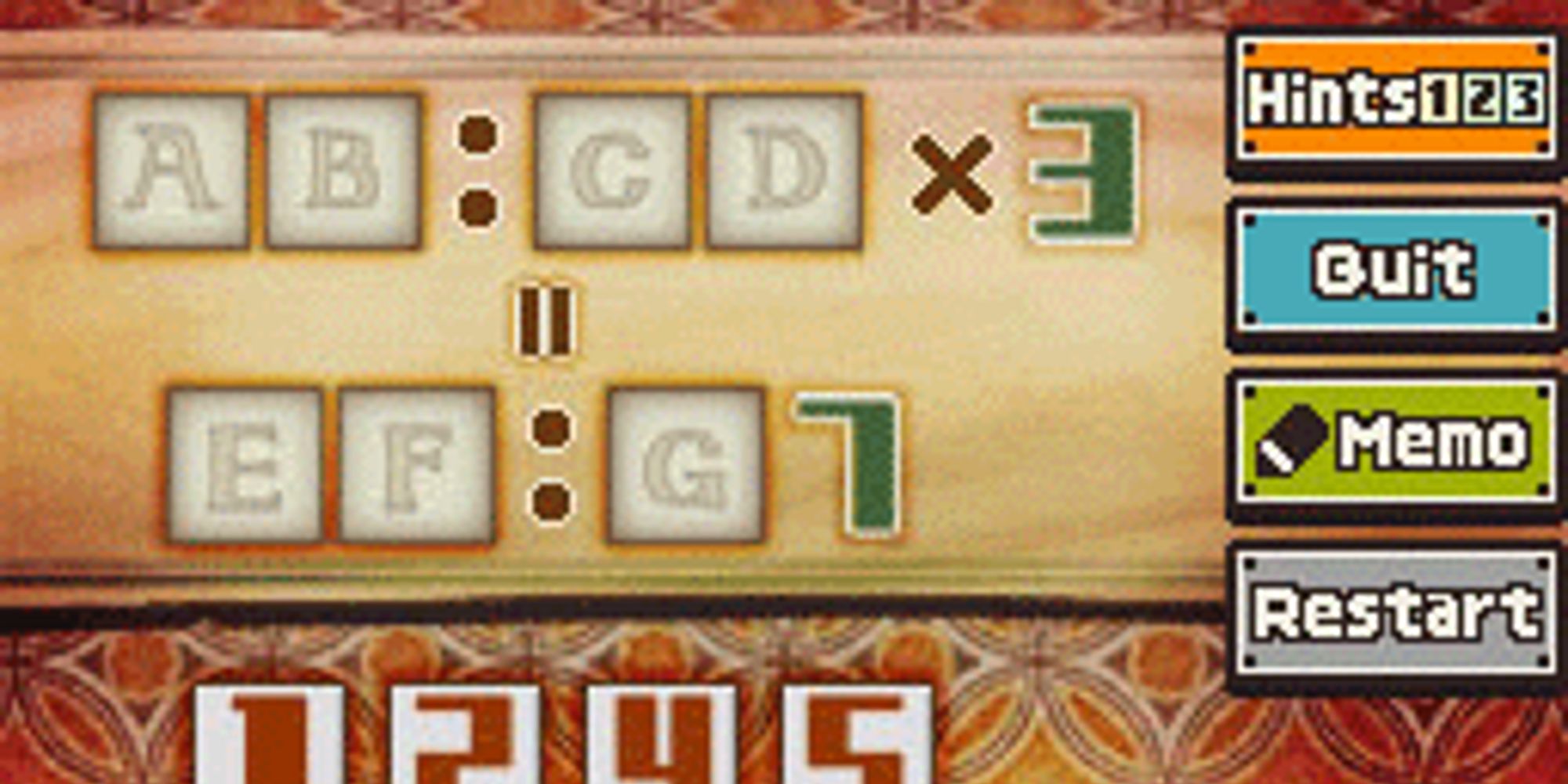 Speaking of high school geometry… let's hope you were better with algebra!

Unwound Future is all about time: time travel, the passage of time, and the healing of old wounds. It also provides fresh new wounds in the form of puzzles like this. Here, you find yourself tasked with creating a valid equation using the numbers provided. You'll need to place them in the corresponding letter spots marked at the top of the screen. Additionally, make sure you keep track of the sixty-minute limit for the equation total, and remember that sixty seconds will always roll over into one minute. 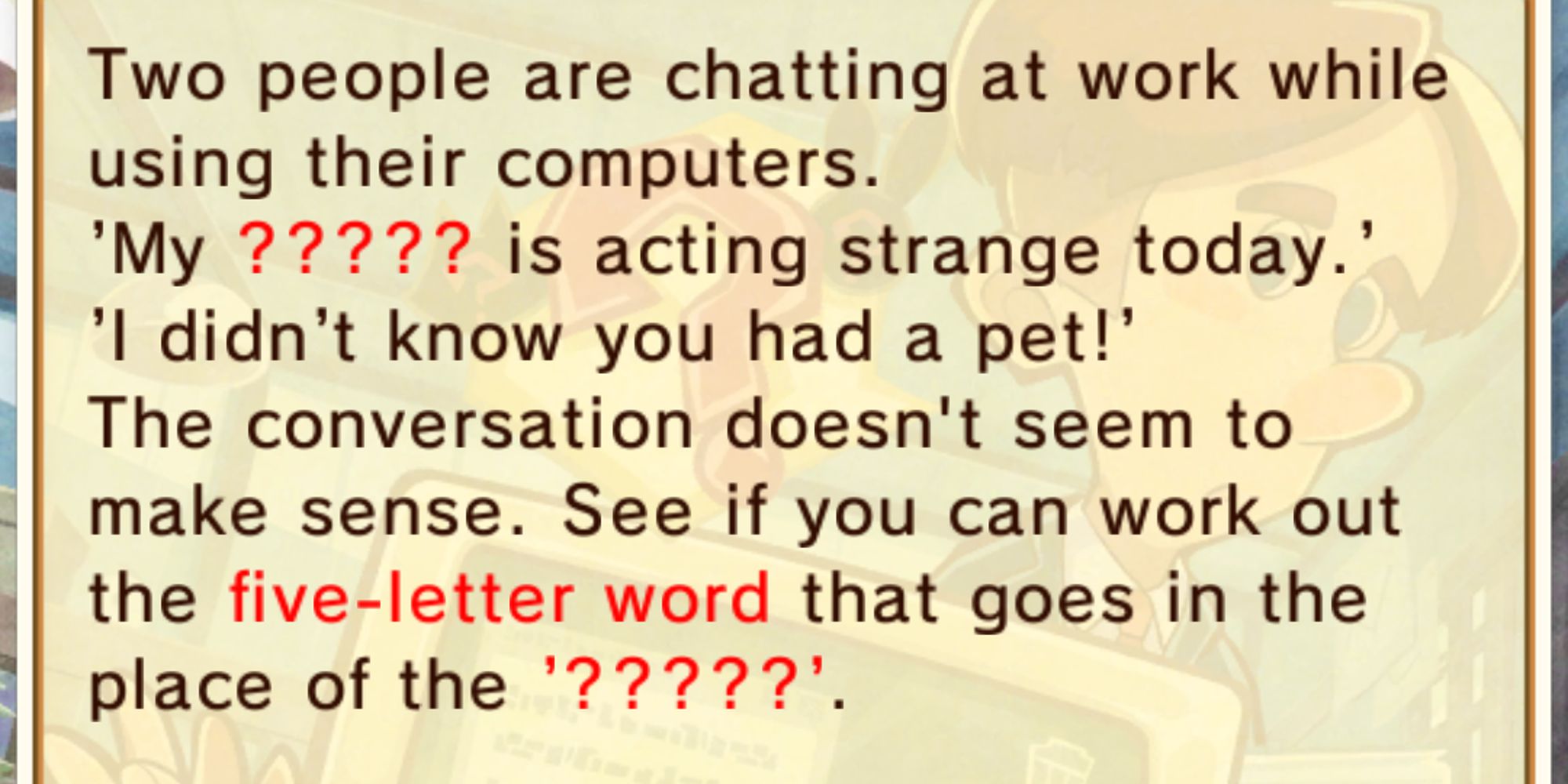 This puzzle was actually removed from the Switch port of Layton's Mystery Journey: Katrielle and the Millionaires' Conspiracy. It was replaced with a puzzle about spinning valves to send water through the correct pipelines, so perhaps we should be grateful for the simple (if unintuitive) nature of its predecessor.

The magic five-letter word we need here? "Mouse"! It's possible to guess the answer if you caught the clue about both coworkers using their computers, but the premise of the puzzle itself is based on a misunderstanding. It's a bit flawed, and Level 5 must have agreed given its swift replacement. 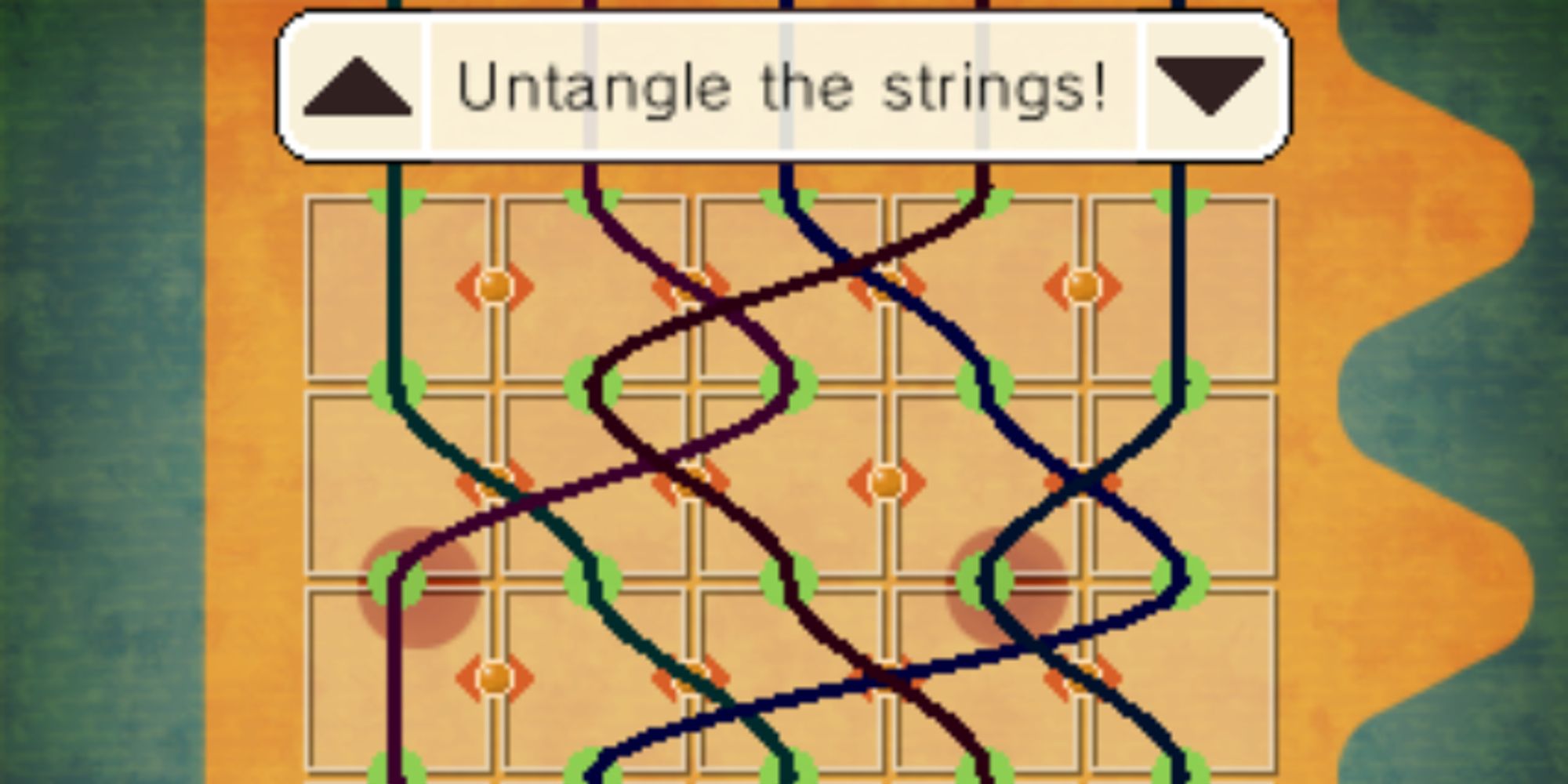 Ah, Stumble. A poor, poor clown who just can't catch a break — this isn't the first time we find him struggling in Professor Layton and the Miracle Mask. Once again he is entangled in a nest of his own balloons, helplessly dangling at their mercy.

To bust him out, a string-savvy player will need to untangle these infernal ribbons by touching the orange spots on the screen, and swapping their locations until they're straight again. The tricky part is keeping track of the intersecting, noodle-like threads without turning your poor brain into spaghetti in the process. 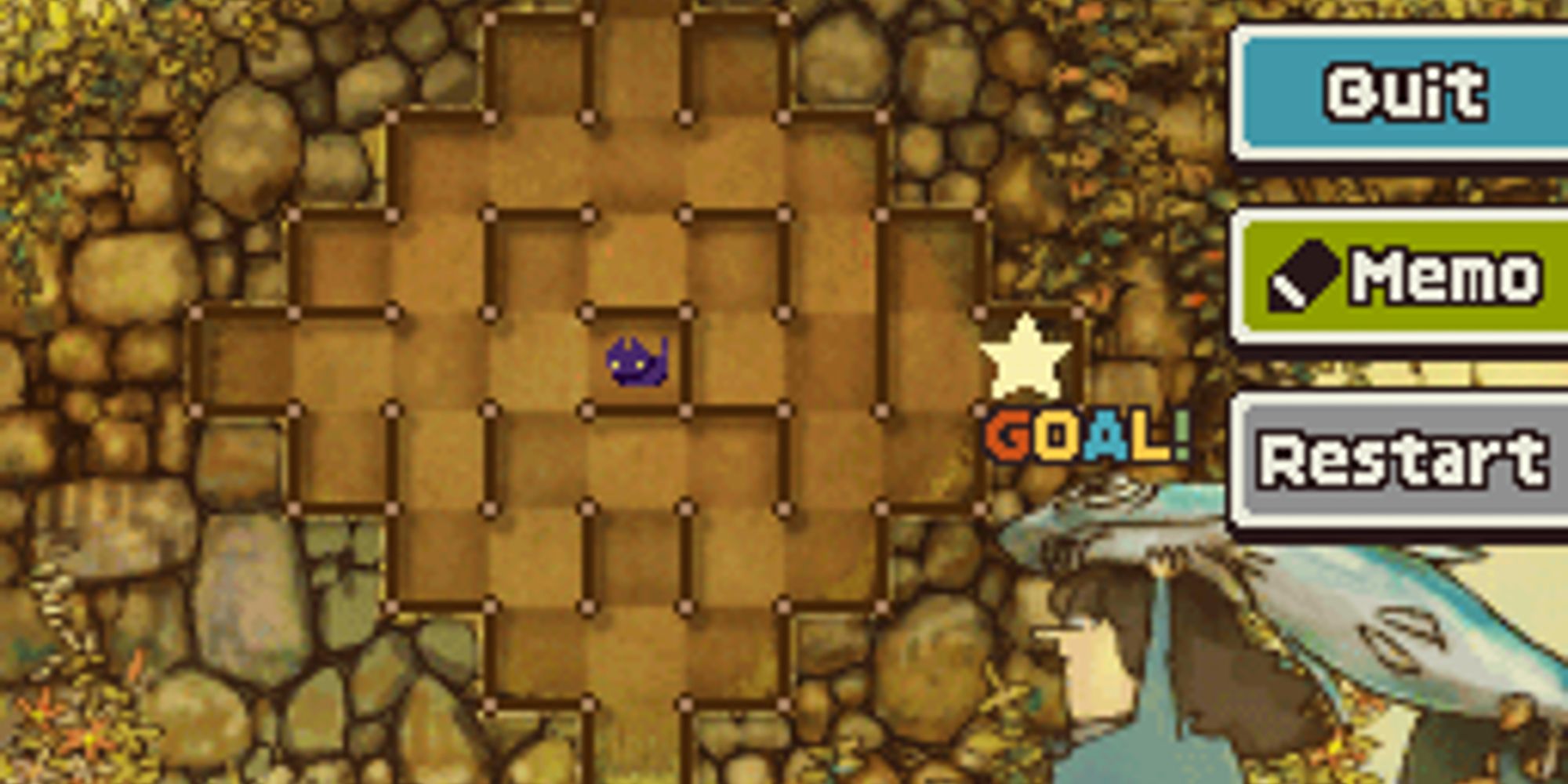 Some cats just don't want to be rescued from trees, even if it's in their best interest. This particular cat, from Professor Layton and the Last Specter, is just so enamored with this labyrinth of dirt that she has little interest in going home.

You'll have to do the only logical thing available to you: luring her out with a maximum of seven slices of dead fish that you just happen to have on your person. The cat will always move toward the fish in her direct line of sight, so you'll have to consider both the layout of the maze and the cat's movements to solve this one. 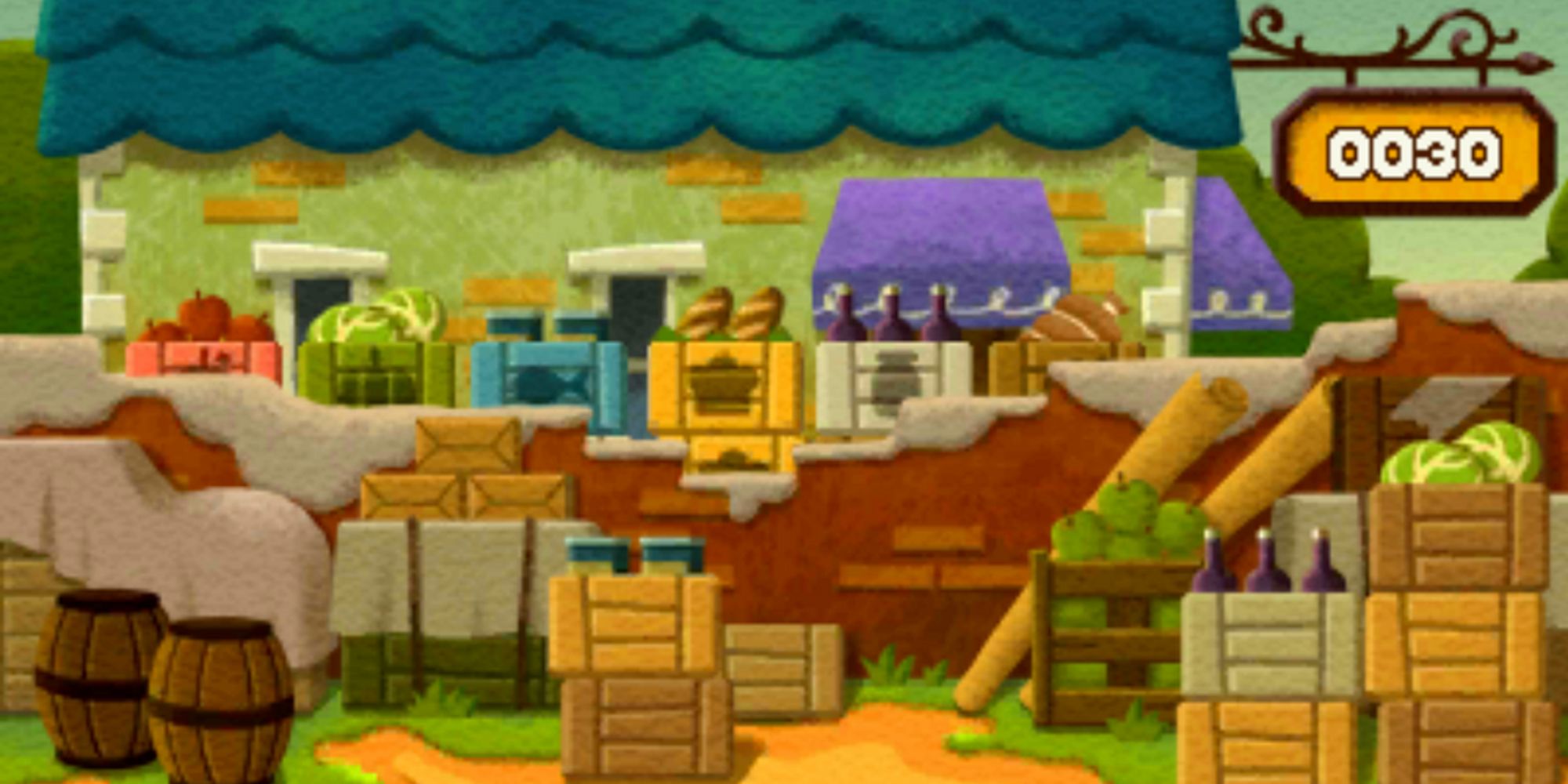 Professor Layton and the Azran Legacy brings us a new spin on a timeless conundrum: ordering too much stuff on the internet. You own a small business (presumably a grocery store), and you have surplus stock that needs sorting before customers arrive. Thankfully, you have a very simple and convenient method of organizing your goods — stacking boxes of the same color from the left of the room to the right, in this order: red, blue, green, yellow, white, and brown.

Oh, and don't forget, you haven't been hitting the gym lately, so you can only lug around four boxes at a time in your shrimpy arms. Plus, you're too short to manage stacks higher than six boxes, and you prefer free-climbing the shelves over buying a ladder. Got all that? Great. Hop to it! 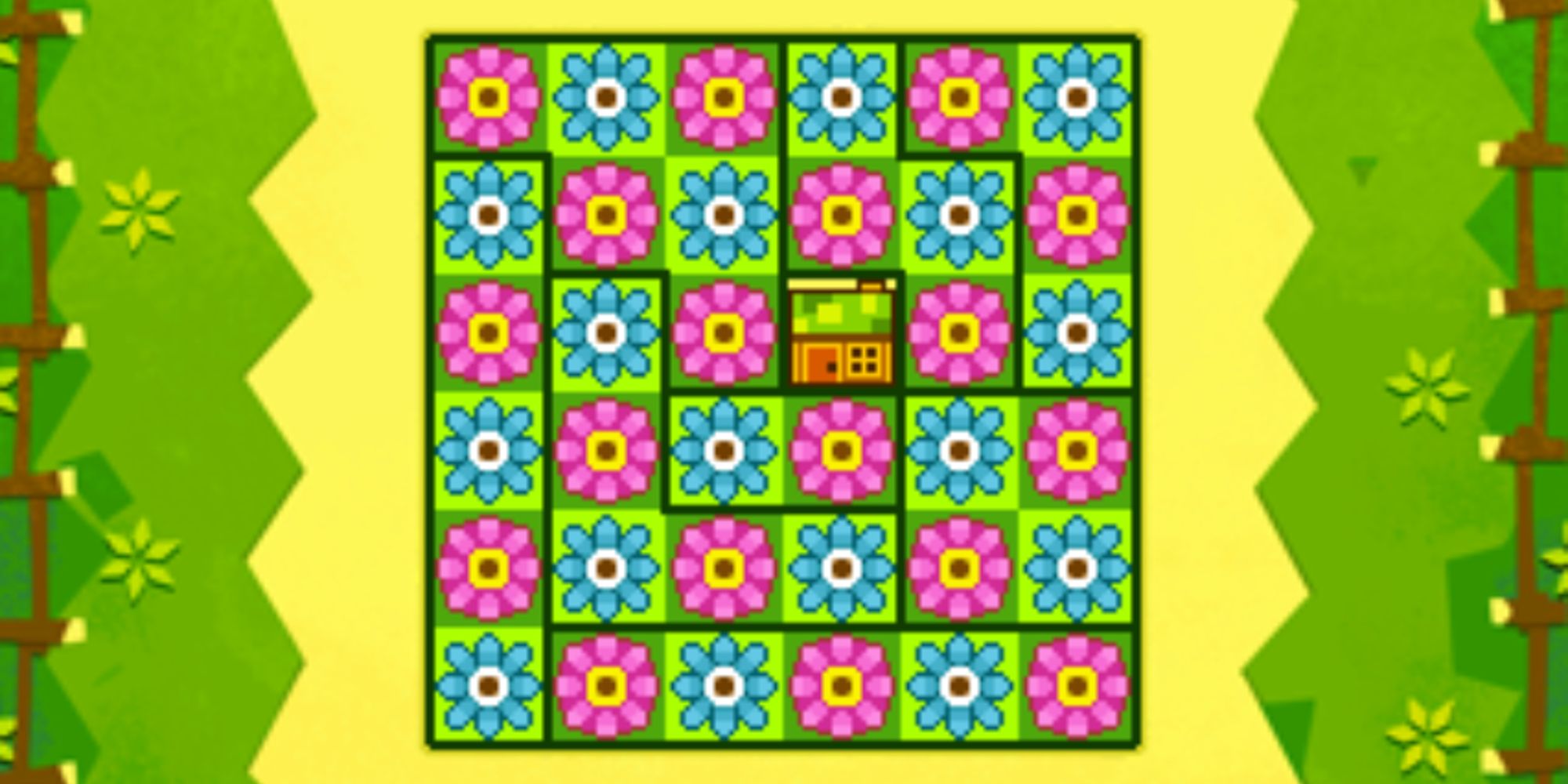 In Professor Layton and the Azran Legacy, we encounter the most horrific puzzle of all… suburban lawn owners. The NIMBYs are ready to make your life a nightmare. You see, they're very particular about how they plant their flowers: no two of the same color can be planted beside each other inside the square. You'll need to tap and sort the flowers in their labyrinthine yard until their conditions are satisfied.

Unfortunately, you're not allowed to plant the flowers on the square where their house is located. If you were the underpaid gardener asked to complete this outlandish request, you'd probably want to stuff all of their sock drawers with dirt.