Riot Games has just released the new League of Legends Worlds Championship song — and it’s a banger. The track features American rock band A Day To Remember’s lead vocalist Jeremy McKinnon, and popular artists MAX and Henry. This is the seventh Worlds song produced, with last year’s song being “Phoenix.”

Over the past month, fans were curious about the annual Worlds song. It’s a bit odd that the track hadn’t been released yet, especially since Worlds begins in less than two weeks. Riot has been teasing fans regarding the premiere of the song with images captioned with the song’s title, “Take Over.” The countdown sparked excitement and kept fans on the edge of their seats.

Right before the release of “Take Over,” the official League of Legends account posted a link for fans to pre-save the song. The options included Apple Music, Spotify, Tidal, and Deezer. If you don’t have any of these, then you’re free to listen to it on a never-ending loop on Youtube.

“Take Over” is the new Worlds anthem

There were over 100,000 viewers waiting for the premiere of “Take Over” just a few minutes before its release. The video featured several players such as T1’s Lee “Faker” Sang-hyeok and FunPlus Pheonix’s Gao “Tian” Tian-Liang. The main character appears to be Argentinian based on the design of their white and blue striped sweatshirt. Viewers watch him as he starts his journey as the next League of Legends Worlds Champion. Over the course of the song, he meets opponents and defeats them, eventually ending up on the Worlds stage. He then rushes to the trophy at the same time as another person. The video ends with Fake silently watching the games from his mobile phone. 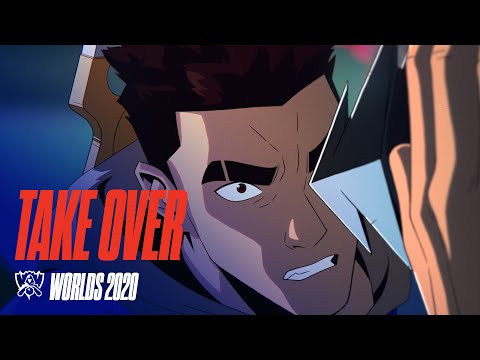 Past Worlds tracks featured artists like Imagine Dragons, Zedd Chrissy Costanza, and Against The Current. Typically the songs are accompanied by an animated music video presenting most players or teams attending Worlds. The list of songs go as followed:

The official music was produced by Line Animation, the same studio that animated True Damage‘s GIANTS music video. Fans can tune in to lolesports watch the Play-Ins stage for Worlds begin on Friday, September 25.