Seemingly out of nowhere, Nintendo casually revealed a new Mario game for Nintendo Switch, and it’s arriving fairly soon. Paper Mario: The Origami King releases on Nintendo Switch on July 17, which means it will share a release date with the highly-anticipated PS4 exclusive Ghost of Tsushima. Before the reveal, we only knew of a few upcoming Switch exclusives releasing this year, including Bravely Default 2 and No More Heroes 3. And if Nintendo does indeed release the Super Mario remasters this year, Switch users could be in for a whole lot of Mushroom Kingdom fun in 2020. Paper Mario: The Origami King is available to pre-order now.

Paper Mario: The Origami King is the first game in the series since 2016’s Paper Mario: Color Splash. As has become the norm for the franchise, The Origami King will shake things up when it comes to combat. Battles take place in a ring and blend traditional turn-based combat with puzzle-solving by turning the dial on the ring.

Meanwhile, the story starts off jolly and quickly turns sideways, much like most Mario games. Princess Peach invites Mario and Luigi to an origami festival, but when they arrive they learn that Peach has been turned into origami herself. King Olly, a new villain, orchestrated the takeover of the Mushroom Kingdom and enlists the services of Bower’s minions. Incredibly distressed by this fact, the King Koopa volunteers to help Mario on his adventure. Mario also gets assistance from King Olly’s sister Olivia.

Across the adventure, you’ll get to use a number of new tools and tricks to make progress. The “1000-Fold Arms” let Mario stretch out to solve puzzles by altering the environment. Platforming between combat encounters includes traditional Super Mario side-scrolling, but some environments also have depth like earlier games in the series and the similarly cute Yoshi’s Crafted World.

So far, only one pre-order bonus has been revealed. GameStop is giving away an exclusive pin set with Paper Mario: The Origami King. You’ll get Origami Peach and Paper Mario as he appears on the cover of the game.

If Paper Mario: The Origami King sounds like your kind of game, it’s available to pre-order now for $60 in both physical and digital formats. 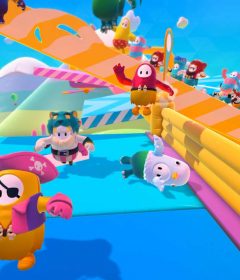