Mewtwo will flood Pokémon Go raids today from 6-7 p.m. in your local time. Players will also get an additional two free Raid Passes during the hour from spinning discs at gyms.

This is one of the most important Legendary Raid Hours we’ve gotten in Pokémon Go so far, as this iteration of Mewtwo is the strongest all-around attacker in the game. This version of Mewtwo knows Psystrike, a move that can only be obtained through these raids, so if you need to fill up holes on a strong team for raids, you should plug them up with this Mewtwo. Psystrike cannot be learned with a Charge TM.

With Confusion and Psystrike, Mewtwo becomes the strongest psychic-type attacker by a long shot. Mewtwo stays as a pretty good overall attacker, as long as the opposing Pokémon doesn’t have a psychic-type resistance. (Psychic- and steel-type Pokémon have resistance towards psychic-type moves.)

Mewtwo is susceptible to bug-, ghost-, and dark-type moves. For a full list of counters, check out our Mewtwo raid guide.

If you end up raiding during the hour at any EX Raid locations, you may get an invite later on to take on Mewtwo at the same gym next week or so. However, the Mewtwo appearing in EX Raids will have Shadow Ball instead of Psystrike. Shadow Ball Mewtwo was at the top of the DPS charts for a long time, and it’s only been semi-recently outclassed by Origin Forme Giratina as a ghost-type attacker. It’s still a solid pick and is very useful, so if you get that EX Raid invite, you should definitely try to go.

Mewtwo has a chance to appear Shiny in both the EX Raid and during the Raid Hour. Remember that Shiny Legendaries are guaranteed catches (as long as you land a ball), so feel free to use a Pinap Berry instead of one of the more rare berries to bring in double candy. 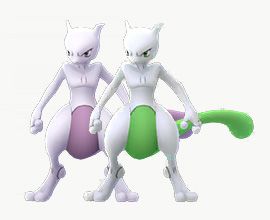