However, investment dropped significantly in Q4 2019 compared to the previous quarter in terms of both deal volume (i.e., the number of deals) and deal value (i.e., the dollars invested). If that quarterly drop is indicative of a longer term trend, some AR/VR startups might need to focus on revenue generation and managing their burn rates this year, rather than leveraging VC investment to accelerate growth.

Tracking the first two quarters of 2020 could be critical to see where virtual and augmented reality market investment is headed next. 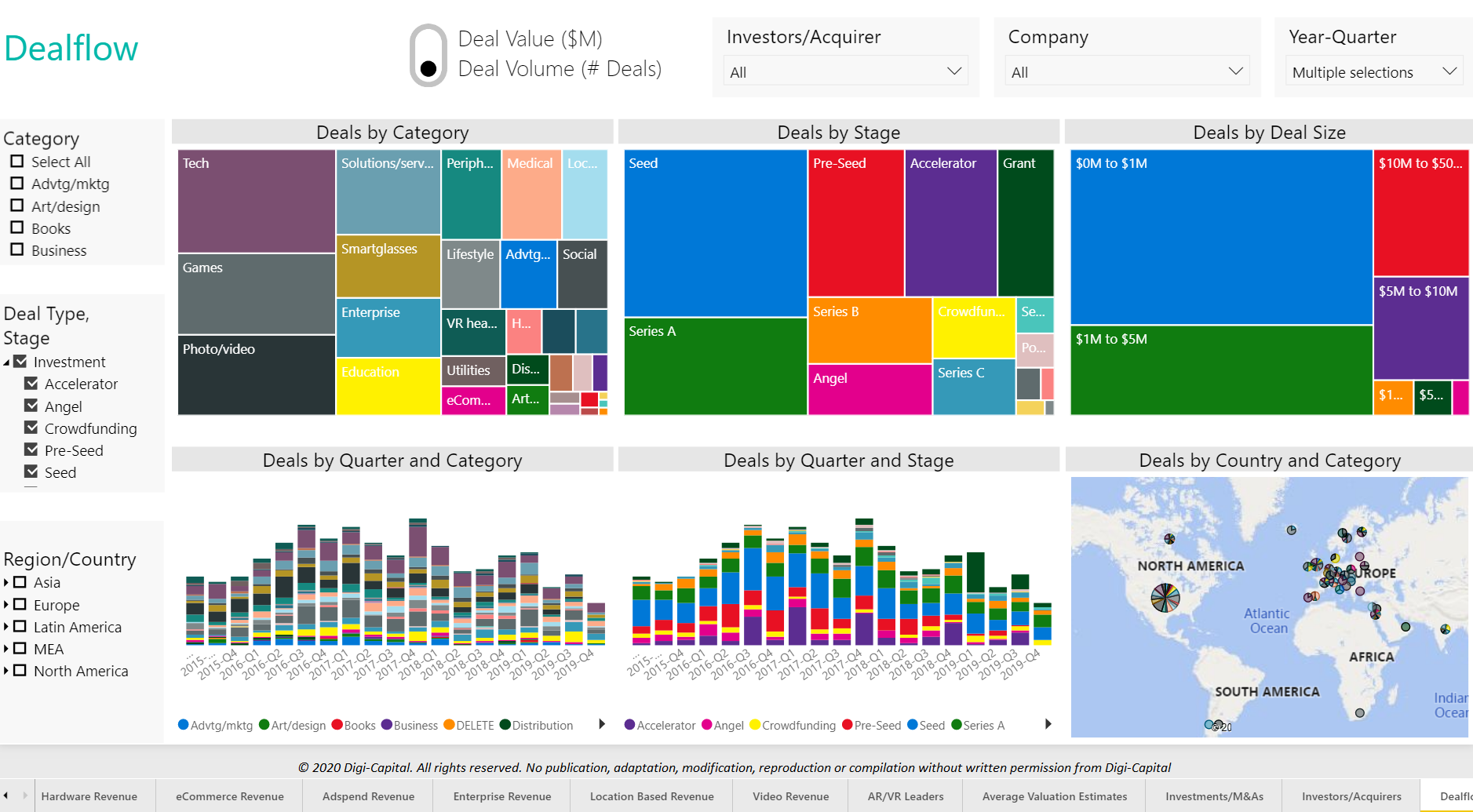 [Note: free charts do not include numbers, axes and data from subscriber version, with underlying hard data sourced directly from companies and reliable secondary sources. Specific data points are referenced in the rest of the text. Methodology in companion Augmented/Virtual Reality Report Q1 2020)]

AR/VR deal volume (again, number of deals) looked like it had stabilized in Q3 2019, but it declined significantly in the fourth quarter. Total investment volume dropped by 27% in 2019 compared to 2018.

Categories with the highest volume of deals in the last 12 months were AR/VR tech, games, education, smartglasses, medical, enterprise software/services (ex-hardware) and solutions/services. All other categories had fewer deals last year.

AR/VR investment value (again, dollars invested) in 2019 saw a decline of 35% from 2018. As above, deal value dropped significantly in Q4 2019 compared to the previous quarter, which together with a lower Q1 2019 led to the drop in overall investment for the year.

AR/VR tech and social companies dominated deal value, with smartglasses, location-based entertainment, and games also significant in 2019. There were investments at a lower level in other categories, too. 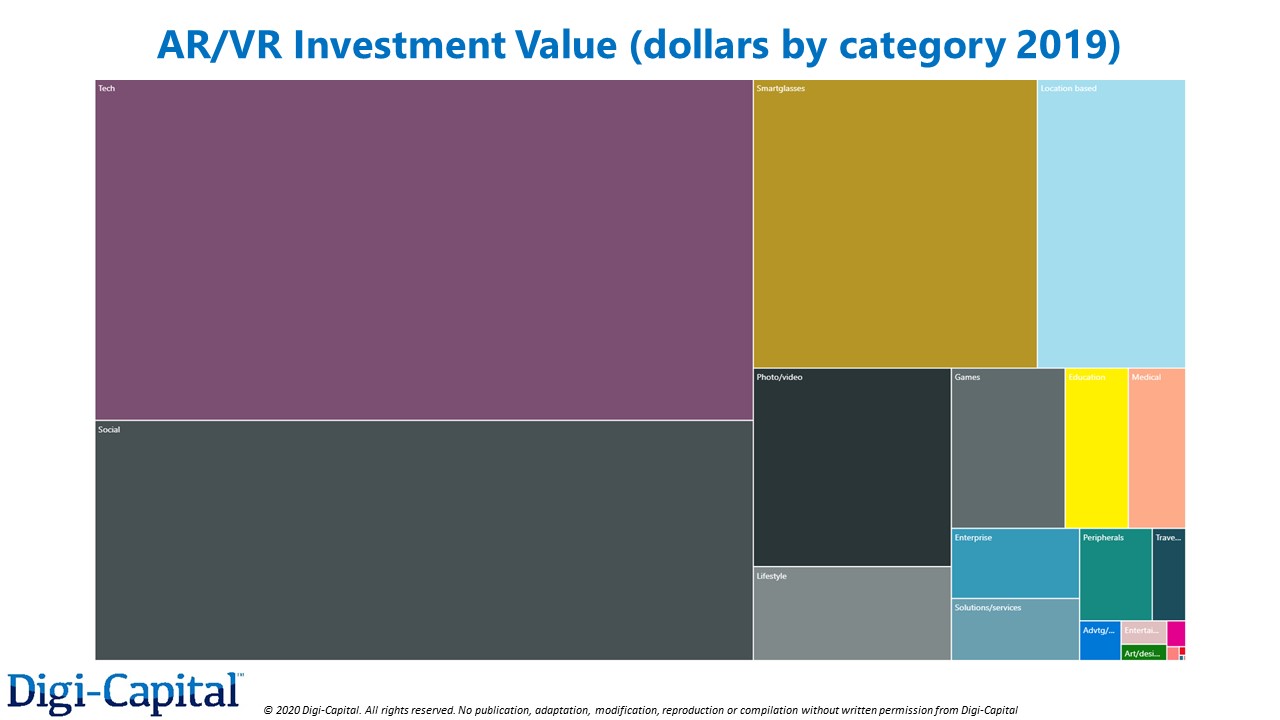 The largest volume of investments by stage in 2019 came from Grants, Seed, Series A, Accelerator, Crowdfunding. and Series B rounds. All other stages saw fewer deals over the course of the year. 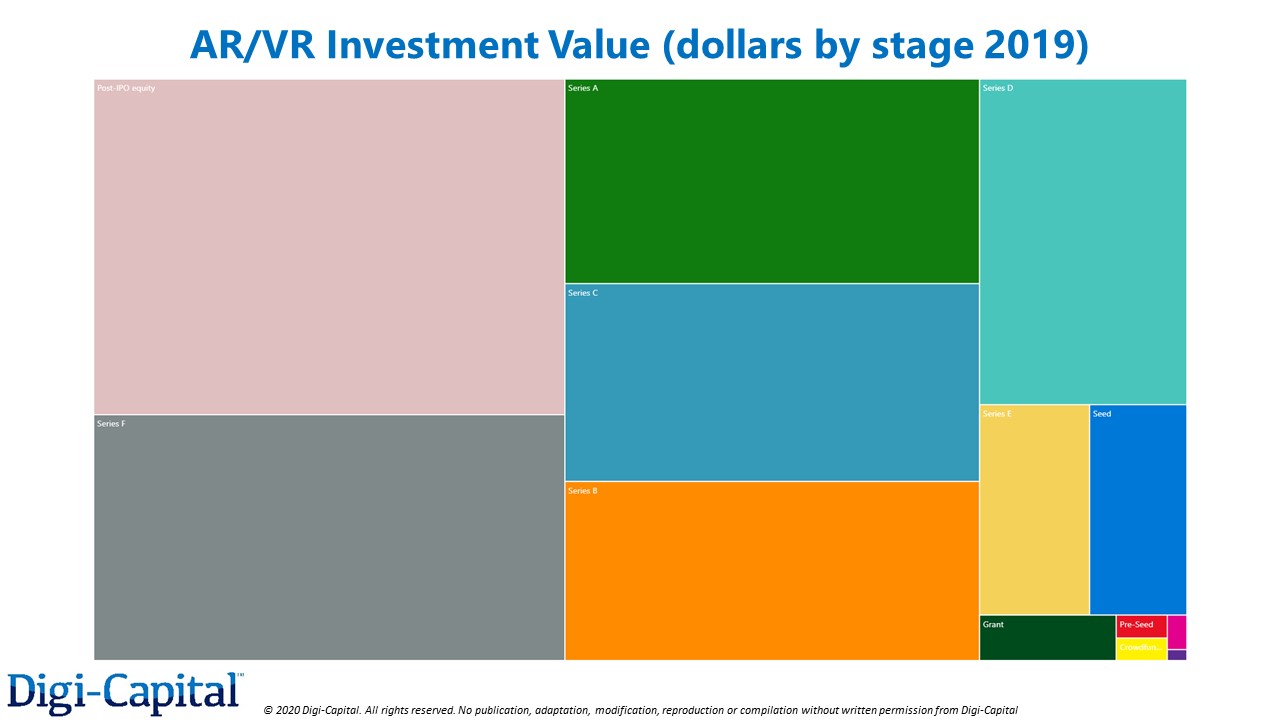 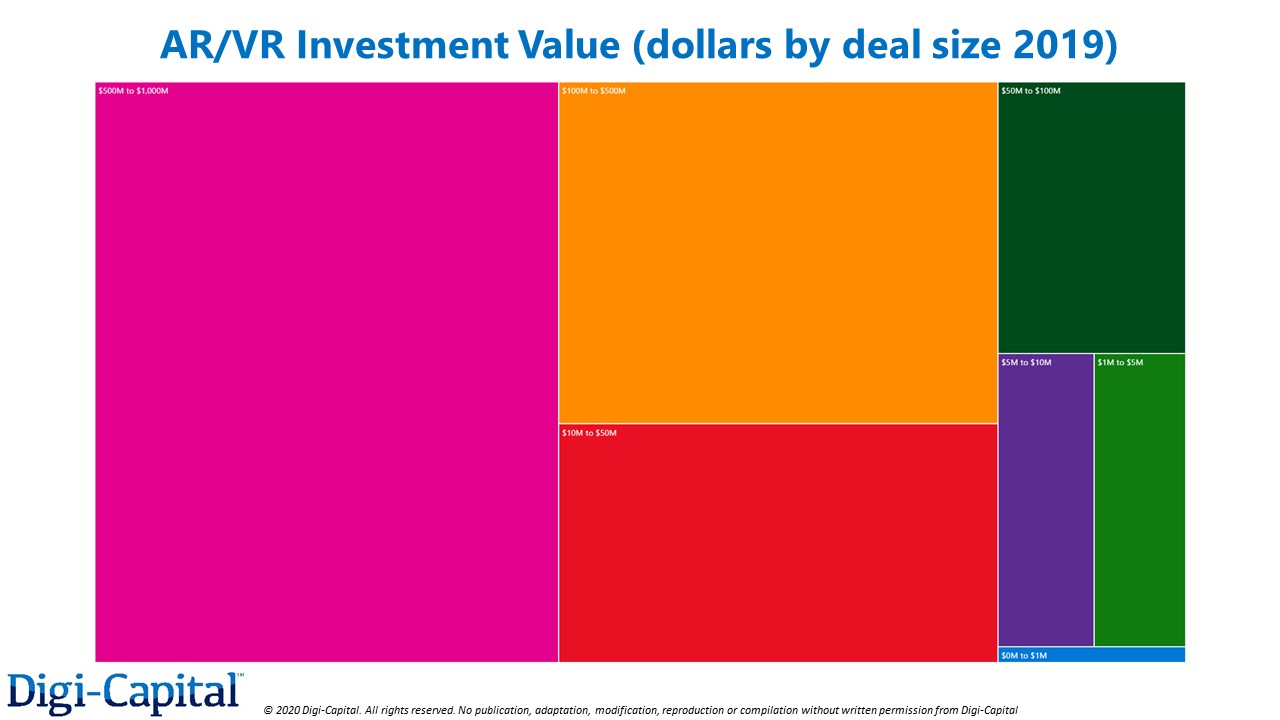 Geographically, the U.S. and China continued to dominate AR/VR investment in 2019 as in previous years. These were followed by Israel, the U.K., and Canada. All other countries saw lower levels of investment in AR/VR last year. 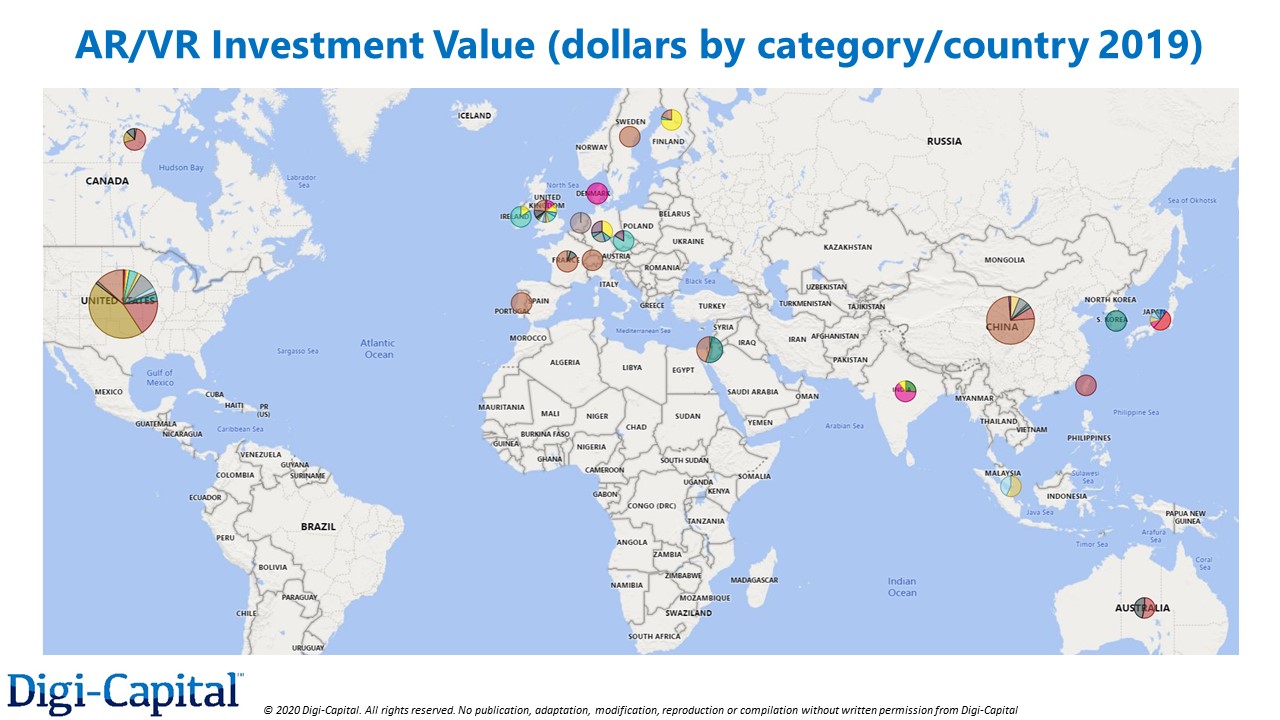 AR/VR has seen relatively few M&A deals compared to other tech sectors so far, with around $700 million of M&A deals last year. The largest number of M&A deals in 2019 were in AR/VR solutions/services, games, smartglasses, tech and lifestyle, as well as a range of acquisitions across other categories. Apart from a couple of big deals, quarterly AR/VR M&A value (i.e. dollars paid to acquire companies) has remained in the tens to hundreds of millions of dollars per quarter since 2014.

While there could be an uptick in AR/VR M&A activity if a market inflection point happens in coming years, there isn’t an obvious catalyst for large-scale M&A in the short term. 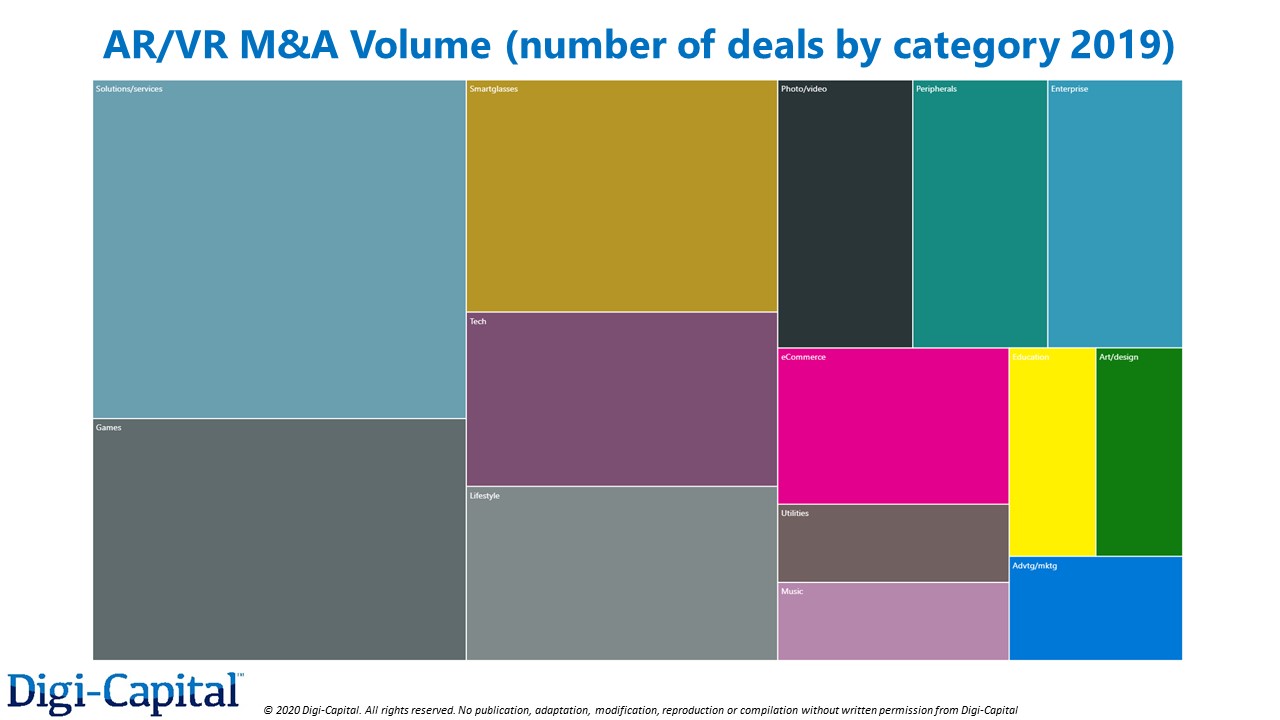 With AR/VR entering a potentially transitional year in 2020, only time will tell whether investment trends from late 2019 continue (or not). Market catalysts can move markets, as Facebook did back when it bought Oculus in 2014. Macro factors like COVID-19 could also play a significant role in tech market investment more broadly (not just AR/VR). So it will be interesting to see what happens in the first half of the year, and whether the AR/VR deals market surges or remains at its current level.